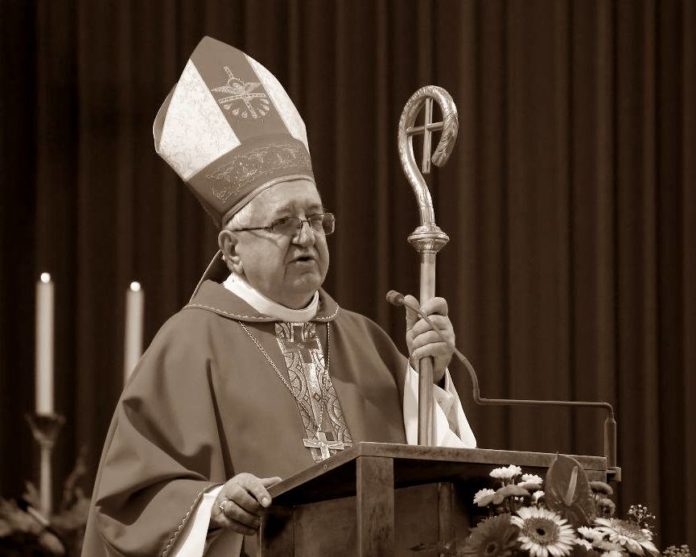 Sad news came to us from Brazil – our confrere, Bishop Czesław Stanula CSsR has passed away. He died on May 14, 2020, at the age of 80, after a serious illness.

He spent 54 years on missions, first in Argentina and then in Brazil, and dedicated his life for proclaiming the plentiful redemption of the people there. He was awarded the Commander’s Cross with the Star of the Order of Polonia Restituta in 2018. Eternal rest grant unto him, o Lord…

Bishop Czesław Stanula CSsR was born on 27 March 1940 in Szerzyny in the Tarnów district, Poland. He made his first religious vows in the Redemptorist Congregation on August 15, 1957, and was ordained a priest on July 19, 1964. He left Poland for missionary work in Argentina, then in 1972 he was transferred to Brazil, to a newly established missionary community of Polish Redemptorists in the poor regions of the State of Bahia – he ministered primarily in the Shrine of Bom Jesus da Lapa and as a folk missionary.

In 1989 he was appointed by Pope John Paul II as Bishop of the Diocese of Floresta in Pernambuco, Brazil, where he worked until 1997. He was then transferred to the Diocese of Itabuna in the southern part of the State of Bahia, where he ministered as diocesan bishop until his retirement in 2017.

In addition to his normal ministry in the diocese, he was particularly involved in the pastoral care of families and charismatic renewal. In the Brazilian Bishops’ Conference (CNBB), he was president of the “Nordeste 3” region.

Bishop Stanula was recognized as a man of the pen. For his literary activity, he was admitted to the Academy of Literature (Agral) in Itabuna on May 22, 2012, and for his pastoral and social commitment, he was awarded the title of Honorary Citizen of the State of Bahia on August 21, 2013. In 2014 he celebrated the Golden Jubilee of the priesthood. On this occasion, Sister Miria Terezinha Kolling (a well-known composer of church music in Brazil) composed a special hymn in His honor (“Bispo Ceslau em Jubilee”), which was sung for the first time at the beginning of the Jubilee Mass by a choir of 50 people.

On his visits to Europe, he ordained many Polish Redemptorists as priests and used to administer the sacrament of confirmation to many Polish young people, especially in the Polish Catholic Mission in Munich and Stuttgart.

Being in his retirement, he spent the last years of his life in El Salvador, Bahia, Brazil, actively preaching the Gospel and exercising his ministry as a retired Redemptorist bishop.

The Redemptorist Congregation gave the Church a total of 6 cardinals, 30 archbishops, 128 bishops – see the list.