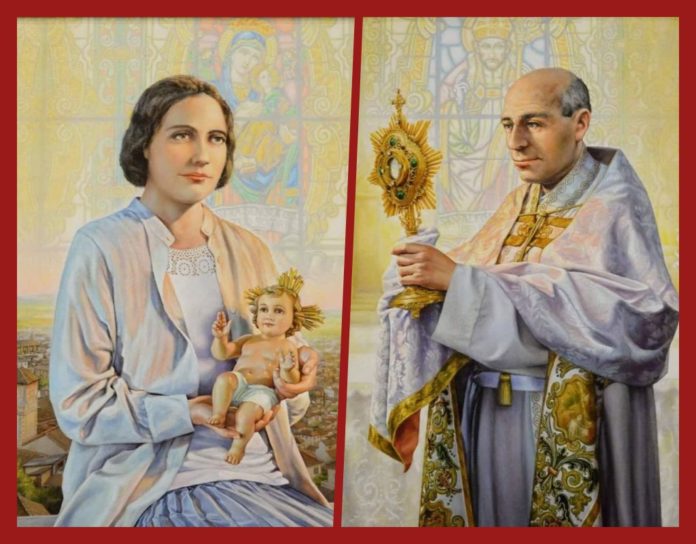 On May 5, 2020, Pope Francis authorized the Congregation for the Causes of Saints to promulgate the Decrees concerning:

– the heroic virtues of the Servant of God Francis Barrecheguren Montagut, a professed priest of the Congregation of the Most Holy Redeemer; born in Lérida (Spain) on 21 August 1881 and died in Granada (Spain) on 7 October 1957;

– the heroic virtues of the Servant of God Maria de la Concepción Barrecheguren y García, Laica; born in Granada (Spain) on 27 November 1905 and died there on 13 May 1927.

Francisco Barrecheguren Montagut was born in Lérida on 21 August 1881, into a family of wealthy economic conditions. Baptized ten days later in the parish of the cathedral, barely eleven months old, he was orphaned by his father. He was left alone after the death of his sisters, Carmen (1876) and Manolita (1883), and his mother (1885), having no other family in Catalonia, he went to live in Granada with his uncles and aunts who took loving care of his cultural and spiritual formation.

After finishing high school in 1897 at the Jesuit College in El Paso (Málaga), he began university courses. However, as he had to leave Granada to continue his university studies, he preferred, with the advice of his relatives, to abandon his studies to work in the textile factory of his uncle Victoriano Montealegre, who was also his tutor. In the company he held the position of managing director.

On October 2, 1904, in the parish church of S. Maria Maddalena in Granada, he married Concha García Calvo. On the 27th of November of the following year, his only daughter, Maria Concepción, was born, familiarly called “Conchita”.

From this time on, Francisco’s constant concern was the human and Christian formation of Conchita, so he did not spare any criticism or energy. In fact, it was he himself who was in charge of school teaching and prepared her for confession, communion and confirmation.

Francisco also expressed the same attentive and solicitous love for his wife, especially after Conchita’s death on May 13, 1927, when Concha manifested the worsening of the mental imbalance that had begun at the same time as Conchita’s illness.

Until June 13, 1937, the day of his wife’s death, the Venerable was always patient and affectionate, even when Concha returned home after a long period of treatment and exploded in sudden and unmotivated acts of anger.

After the death of his wife Concha, Francisco devoted time to prayer and works of charity. Having heard the talk of religious life, with the advice of the Jesuit Father Avellán, his spiritual director, many Redemptorists and especially his friend Cardinal Pedro Segura y Sáenz, Archbishop of Seville, he decided to enter the Congregation of the Most Holy Redeemer, after having donated, in March 1945, all his considerable goods to the Sisters of the Congregation of the Slaves of the Eucharist.

Francisco’s eight years of priesthood were marked by a constant apostolic commitment and a patient acceptance of the rhythms of religious life. Particularly significant was his pastoral activity at the bedside of the sick.

On October 7, 1957, he died a holy death in the Redemptorist house in Granada. In November 1996, the mortal remains were moved to the church of Our Lady of Perpetual Help in Granada, next to those of her venerable daughter Conchita.

Maria de la Concepción (Conchita) Barrecheguren was born on November 27, 1905 in Granada, from the Venerable Francisco Barrecheguren Montagut and Concha García Calvo, both from wealthy families and animated by great faith and solid moral principles. The newborn was baptized in the Parish of the Shrine of Granada on December 8, 1905, with the name of Maria de la Concepción del Perpetuo Socorro, Francesca de Paola, Eloisa, Primitiva de la Santissima Trinidad, although she was always familiarly called “Conchita”.

From childhood Conchita showed signs of precarious health. When she was just over a year and a half old, she became seriously ill with a very acute enterocolitis, so much so that she feared for her life. The little girl miraculously recovered and her parents attributed her unexpected recovery to the intercession of the Virgin of Lourdes. Considering her precarious state of health, the parents decided, at the suggestion of the doctors, not to let her attend any school in the city, becoming her educators themselves. In particular, the education of the daughter was taken care of by her father, assisted by two teachers, who also gave her an adequate catechetical preparation for the sacraments of Confirmation, which she received on May 3, 1912, and First Communion, which she approached at midnight Mass on December 25, 1912.

In addition to her studies and also carrying out domestic activities with her mother, she spent several hours praying in the home oratory, reciting the rosary and teaching the catechism to domestic helpers, as well as walking with her father and reciting pious exercises with him.

From an early age Conchita felt the call to religious life, wishing to become a Carmelite. Unfortunately, illness prevented the realization of her desire. At the age of ten she had a deep religious crisis due to scruples, but it was positively resolved in about two years with the wise intervention of her new confessor, the Redemptorist Fr. Ruiz Abad. In 1917 she was diagnosed with intestinal inflammation which caused her severe pain and forced her to eat a strict diet.

Furthermore, in 1924, her mother was afflicted by a serious mental imbalance, so much so that she was admitted to the Sanatorio de la Purissima in Granada, with an absolute ban on visits. The Venerable and her father heroically faced this new pain, sustained by constant prayer and trust in God.

In spite of her poor health, Conchita made several trips and pilgrimages, of which she took notes and wrote chronicles. In August 1926, after a pilgrimage to Lisieux, at the tomb of St. Therese of the Child Jesus, she fell ill with tuberculosis, so doctors advised her parents to move to the Carmel of St. Valentine, near the forests of the Alhambra, in the hope of stopping the worsening of the disease. Unfortunately, however, the transfer did not bring the hoped-for improvement and Conchita died on the morning of May 13, 1927, at the age of only 22 two.

Buried in the family chapel of the cemetery of Granada, on May 13, 1978, her mortal remains were moved to the oratory of the Carmel of Conchita (Alhambra). Since 29 November 2007 they have been resting in the Redemptorist church of Our Lady of Perpetual Help in Granada, next to the remains of her father, the Venerable Francisco Barrecheguren Montagut.