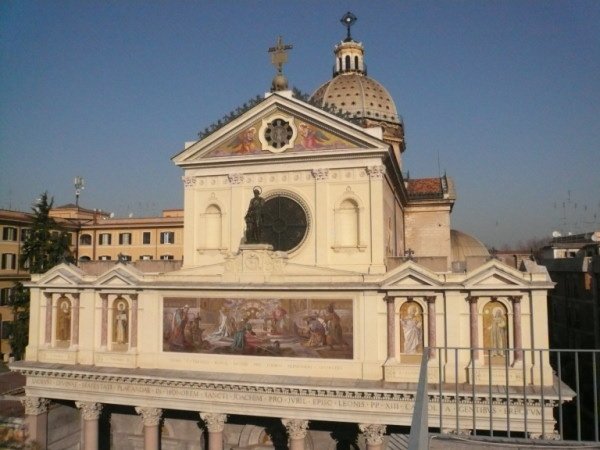 In 1903 Pope Leo XIII founded the seat of the Archconfraternity of the Eucharistic Heart of Jesus in the Roman parish of San Gioacchino in Prati.

These days we remember the solemnity of the Eucharistic Heart of Jesus. The joyful anniversary is the fruit of the affection that the Church and the widespread piety of the late eighteenth century dedicated to this spirituality. Scrolling through the pages of the history of some Roman Churches, it is discovered that in the parish of San Gioacchino in Prati, a great devotion to this cult was born and developed.

Looking at the Church, also from an architectural point of view, you can see the symbols that represent its veneration. In various parts, but specifically on the lunette of the central door and on the facade, the symbols that recall its memory are clearly visible. These show the Christ, at the last supper, while blessing the bread and wine, wonderful signs of the love that loved the world so much.

On the facade, there is the portrait of Pope Leo XIII showing the monstrance to the people of different nations, the symbol of the Eucharistic bread. Devotion to the Eucharistic Heart of Jesus, the Magisterium has highlighted, on numerous occasions, invites us to reflect and enter into the spirituality of the gospel, living in union with the Master in spirit. Fruit of commitment and prayer, but more than that uninhabited word that wanted to be present in the history of the world, until its end (Matthew 28, 20). 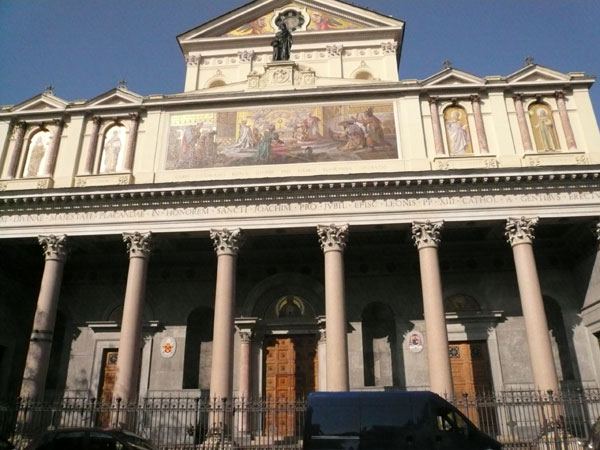 It is not sentimentalism or anything else but the real presence of the Lord in the history of man and his, at times, insoluble acts. Currently, many turn to the practice of Eucharistic adoration and this highlights the signs of this veneration, in a clear and glaring way, placing Christ at the center of the divine horizon.

The parish, currently officiated by his parish priest Father Pietro Sulkowsky, founded in the late nineteenth century, to offer a gift to the priestly jubilee of Pope Pecci, has among its purposes the dissemination and celebration of the Eucharist and the Eucharistic Heart.

The Pontiff established to propagate the cult on 16 February 1903, with a specific normative act, the Archconfraternity of the Eucharistic Heart of Jesus. The seat was in the Roman parish, precisely to highlight the relationship between the Church and the devotion to the Eucharistic Heart.

We read, in the most ancient documents, highlighting the most intimate and personal aspect, that ” the spirit proper to this devotion is love since Jesus asks for our heart by giving us His, and this love is a love of union and compliance.”

In 1909, a group of Catholic Action was also dedicated to the Eucharistic Heart of Jesus. Many young people, from that year onwards, engaged in multiple activities of prayer, charity and culture to bring the heart of Christ to the center of their world. The Redemptorist Fathers, to whom the care of souls in the area is entrusted, in their spirituality have among their devotions, a special predilection for the Eucharistic Heart of Jesus.

This has been repeatedly highlighted by the various General Fathers who have taken turns at the helm of the Alphonsian family, who have reaffirmed their heartfelt cult to the divine Heart. In the works of Sant’Alfonso M.de Liguori, founder of the Redemptorist Congregation, the reference to the Eucharist as the presence of Christ in society is very strong. In the  Visits to the Blessed Sacrament and to Mary Most Holy, he places the Bread of Heaven at the center of this love for the salvation of souls.

In the work, written for his novices and the most faithful devotees, the saint dedicates a chapter to the Bread of life, recalling the closeness of the Lord in the sacred species. It is no coincidence that the Eucharistic Heart of Jesus is at the center of true devotion, in that it brings man to consider that presence that did not hesitate to give himself for the Redemption and salvation of the world. 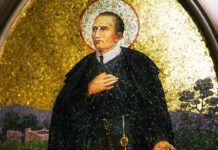