After 15 years as a member of the Desert House of Prayer community in Tucson, Br. Bill Cloughley C.Ss.R. turned off the lights a few weeks ago. We asked him to share some parting thoughts about the unique Redemptorist ministry that offered tranquility to a diverse group of seekers from throughout the world.

The Desert House of Prayer fits me like a glove. I have always gravitated toward silence, but more than the silence intrigued me. Part of my own experience was learning what motivated John Kane – what he thought and felt.

We lived in the midst of the natural beauty of the desert. The rhythm of life was very balanced: prayer, work, meals, silence, conversation. Encountering so many men and women seeking the Divine also was enriching. They came from many different backgrounds and were blessed with many different talents. Many had formidable spiritual and academic backgrounds. A good number of them were involved in a social justice ministry. Some were burnt out and needed to recharge. I was also enriched by some who thought they had no idea of the spiritual or interior life but came across as very much having been touched by the Spirit. We accompanied so many on the path here. 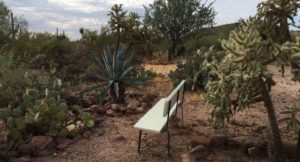 I had served at Holy Name Parish in Omaha for 20 years when Denver Province leadership decided to return the parish to the archdiocese in 2004. The director of the Desert House of Prayer asked if I would consider joining him. I had been involved with maintenance work all my life, but I was not familiar with the ministry. I had never made a retreat at Desert House of Prayer, but I had walked the grounds when I had stayed at Picture Rocks Retreat House. I believe it was a blessing that Fr. Tom Picton, then-Provincial Superior, and the EPC made my appointment here in the summer of 2005.

Shortly after I arrived, I devoted a lot of time to learn more about John Kane and his vision. This search was of great value to me. There were loads of his talks on cassettes. I listened to a few of them. He had periodically sent out a newsletter, The Exodus, which also helped in my understanding, as was his response to the leadership of the Oakland Province in the mid-1970s when asked to elaborate on the nature of this apostolate.

In the early 1970s, the renowned Bernard Häring was promoting houses of prayer – places where people could go to for an opportunity to enter more deeply into a life of prayer. This concept resonated with John, and he, with two religious sisters, founded the Desert House of Prayer in 1971. How this group came together was a miracle itself.

John envisioned priests, religious and lay people forming this community. He also saw a composition of both men and women as part of the community. He wanted the structure organized in such a way that it would help those who came to encounter God, through rejuvenating and deepening the life of prayer. He was very ecumenically minded. He had no programs except a forum on Social Justice once a week, led by our own Ricardo Elford, a necessary component to balance the life of prayer.

The location of the House of Prayer at that time was Picture Rocks Retreat House (now the Redemptorist Renewal Center at Picture Rocks.) Within a few years, John felt that he must find a quieter, less busy place for his unique ministry. The Redemptorists owned property across the main road, so John started to pursue the idea of building a separate place. Again, a miracle in how he met a couple that could help him financially to bring his vision to fruition.

I have been blessed to have lived in a community with some Redemptorists “giants.” But even in the best of communities, there are difficulties. Certainly, this was true for the House of Prayer, to mention a few: how to use our limited resources, personality conflicts, determining the order of the day, and which office prayer book to use. Christ being the center of each of our lives helped us to weather these storms. We were blessed to have a Quaker in the core community for several years. His peaceful presence was a helpful influence.

As much as I appreciated my experience at Desert House of Prayer, I have reviewed some of the things John wrote about prayer and entering into it. I certainly did not come near the ideal, but I am grateful for the opportunity that I was given. Now, only God knows what will happen to the sacred ground that we called the Desert House of Prayer.

I feel sure that my experience will never happen again. But I hope and pray that what was voiced by a visitator from Rome several years ago will be remembered: “There is no place like it in the Redemptorists world.” My hope is that if we keep the property, we will keep some of John Kane’s vision alive.