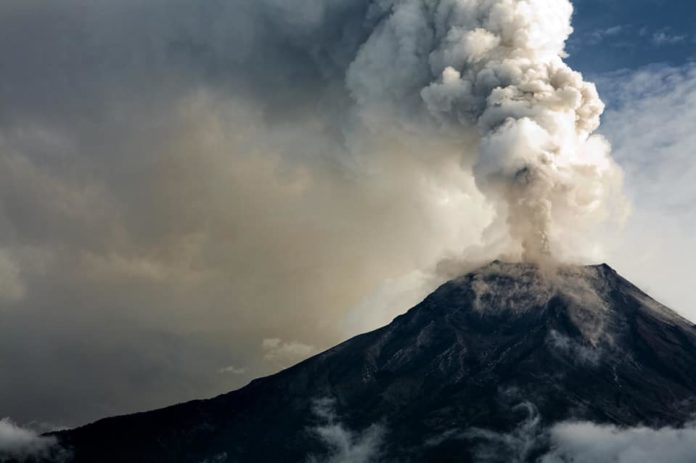 On April 23, the Vatican sent a telegram to the people of St. Vincent and the Grenadines as the country deals with the aftermath of the eruption of the La Soufrière volcano on April 9.

“His Holiness Pope Francis sends the assurance of his spiritual closeness to all those affected by the recent eruption of La Soufrière volcano and expresses his heartfelt solidarity with the many displaced persons forced to evacuate their homes and seek shelter from the effects of this disaster,” wrote Cardinal Pietro Parolin, Vatican secretary of state.

“Praying in a particular way for the emergency personnel and volunteers providing relief assistance, His Holiness entrusts the people of St. Vincent and the Grenadines to the loving providence of almighty God.”

When La Soufrière erupted, it wasn’t exactly a surprise.

Scientists had been warning of an impending eruption of the volcano on the island of St. Vincent since just after Christmas, and residents began feeling tremors March 25, the feast of the Annunciation. An evacuation order went out for what would become the red zone on the northern end of the island on April 8, the day before the top of the mountain erupted in a cloud of hot gas, ash and debris, according to Redemptorist Father Kevin Murray.

“We’re all safe so far,” said Father Murray, who ministers on the northern end of the island, where the Redemptorists of the Baltimore Province, based on the East Coast of the United States, operates three churches. “The evacuation warning was very public, on the radio and everywhere.”

But up to 20,000 people have been displaced, according to officials from the Diocese of Kingstown in St. Vincent and the Grenadines, with some staying in government shelters on the southern part of the island and others traveling to other islands in the Caribbean country or to other island nations such as St. Lucia, about 50 miles away. The evacuation has been complicated by COVID-19 precautions as well, Father Murray said.

Perhaps most are staying on the island with friends and family members, Father Murray said. He is staying at the residence of Bishop Gerard County in the capital of Kingstown, situated on the southern coast of St. Vincent.

How long people will be displaced remains unknown, as the volcano continued periodic eruptions into the third week of April. Geologists said the eruptions, which had already destroyed the mountain’s dome, could continue for some time.

There has been ashfall even on the southern end of St. Vincent in the area around Sandy Bay, the ash is several inches deep in places. What is usually lush, green vegetation and sparkling blue waters is now dingy gray.

“It’s a humanitarian disaster for us, it really is,” Father Murray said. “Many homes have been damaged. There’s been significant ashfall, and roofs have collapsed. People are out of their homes, out of their businesses.”

The roof of Our Lady Star of the Sea Church near Sandy Bay also has collapsed, according to reports and photographs sent by people who either made their way into the red zone or never evacuated.

People in the shelters have a great need for food and water, especially as the volcanic ash has contaminated the rivers and streams that were the source of fresh water for people on the island, Father Murray said. They also need clothing, as they could only bring what they could carry as they evacuated.

“Persons with meager belongings lined the roads waiting for rides away from the red zone, as it is called, to safer ground,” Father Murray wrote in a reflection posted on the Redemptorist province’s website. “They scrambled to makeshift shelters, family members and friends. Close to 20,000 residents shifted from their comfort zone to refugee conditions overnight, including members of the Redemptorist community.”

The Redemptorist province is trying to help by raising money, sending supplies and encouraging everyone to accompany the people of St. Vincent in prayer, said Redemptorist Father Paul Borowski, the provincial superior.

The Redemptorist mission on St. Vincent is new, dating only to 2019, although the community has been active in the Caribbean for more than 100 years, Borowski said. The Baltimore Province, based in Washington, D.C., includes most of the Northeast United States as well as some parts of the Caribbean, and members were looking to expand their ministry there, Father Borowski said.

“We were impressed with the ministry up in the Georgetown-Sandy Bay area (at the north end of St. Vincent),” Borowski said. “And it fit with our charism, which is to reach out to the most abandoned, especially the economically poor. There was a great need for evangelization. Most of the country is not Catholic, and the majority of that northeastern portion of the island is unchurched. It offered a great chance to do evangelization.”

It can be difficult to make people in the United States aware of the poverty that exists in the Caribbean he said.

“We tell people, ‘You may have been there on vacation, and you may have seen the nice pictures of the resorts,’” Father Borowski said. “That is the exact opposite end of the islands from where the Redemptorists are.”

The congregation helped raise money to expand a bakery owned by the Kingstown diocese near Sandy Bay, adding a market for foodstuffs and household goods as well as a pizza place for people from the area to socialize. An outdoor pavilion was built and served as a marketplace for local residents to sell goods.

Both the bakery and the pavilion were damaged or destroyed by ash falling on their roofs, Father Borowski said, although access is still restricted so it hasn’t been possible to assess the total extent of the damage. While the roof at Our Lady Star of the Sea is damaged, there have been no reports of damage at the other churches, St. Benedict in Georgetown and St. Joseph in Bellevue, he said.

The humanitarian crisis will likely last for months, according to the United Nations, Father Borowski said. Then there will be a period of recovery. On April 20, the U.N. made an appeal for nearly $30 million in disaster relief to provide emergency aid to the people and to help fund the ash removal.

“Hurricanes are over in a 12- to 24-hour period, and then you can assess the damage and move on,” he said April 16. “This has been erupting for a week, and it’s continuing.”

Father Borowski said the Redemptorists on St. Vincent, including Father Murray, as well those in the United States, are working with international aid organizations such as Caritas Antilles and Food for the Poor.

Help has also come from Catholics in neighboring island countries, who have offered shelter and provided supplies, Father Murray said.

The outpouring has been amazing,” said Father Murray, who on April 18 went to greet the crew of a boat that sank trying to deliver relief supplies from St. Lucia. The crew was rescued by another boat.

But to get back to normal, whenever that becomes possible, will take more help, Father Murray said.

“I think the majority of the people will want to go back and try to rebuild, as long as it’s feasible,” Murray said. “As long as it’s not covered with ash.”

What is needed to make that happen?

“First of all, remember us in prayer,” Father Murray said. “Remember our needs.”

The Redemptorist province has been publicizing relief efforts on its Facebook page, and its development office has created an emergency fund for people to donate. For more information, visit redemptorists.net.