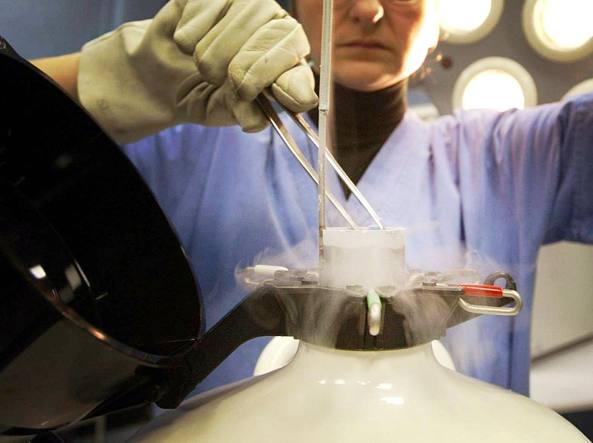 A married couple of mature age had decided to resort to medically assisted procreation (MAP). After the extracorporeal formation of the embryos at the Pertini Hospital in Rome, health problems arose – which were later overcome – and invalidated the first attempt. Four embryos, however, were frozen and taken to a private centre in Caserta for new attempts. After a short time, the couple separated, and when the woman asked her husband for his consent to thaw and transfer the embryos, he refused. The woman, now 43 years old, applied for an emergency injunction to thaw and transfer the embryos against her husband’s wishes. The husband then took legal action, but after hearing the parties, the court of first instance ordered the Centre “to proceed to insert the cryopreserved embryos into the uterus”.

At this point, the man lodged a complaint against the sentence, but the complaint was also rejected by the Court of Santa Maria Capua Vetere, basically for two reasons. First of all, Law 40 states that ‘the will [to have children through PMA] may be revoked by either party (…) up to the moment of fertilisation of the ovum’ (Law 40/2004 art. 6, 3). Once, however, the embryos have been conceived, the will cannot be revoked. If therefore, there are frozen embryos from a couple, they may be implanted in the woman’s uterus even if the man has changed his mind in the meantime. Secondly, the order makes an important statement regarding the conception. Article 1 of Law 40 states that it is permissible to use medically assisted reproduction techniques, but with due regard for the “rights of all persons involved, including the conceived” and, in so doing, affirms that the embryo cannot be equated with mere biological material and that it has rights, the first of which is the right to live. As Alberto Gambino, jurist and pro-rector of the European University of Rome pointed out to Avvenire, it is always necessary to identify the best interests of a child – because a child is an embryo, even if it is frozen – and the latter ‘certainly, when it is in an embryonic stage, cannot but aspire to continue its biological development until it achieves, with birth, full participation in human society. The state of separation of the parents does not change the bond between the parents and the embryo, and even when the bond between the parents is broken, the child born of separated parents will have the right to enjoy both parental figures and the parents, for their part, have rights and duties towards him.

The order sets an important legal precedent for the recognition of the rights of embryos even outside the maternal womb, in line with the orientation of bioethics of personalist inspiration.

It is interesting to see some reactions from the lay world to the Santa Maria Capua Vetere ruling. One of the two lawyers defending the woman, Gianni Baldini, a member of the Luca Coscioni Radical Association, said that this order recognises ‘the woman’s absolute right to use the embryos created with her spouse and then frozen even after the separation and despite the opposition of her ex-husband’, thus distorting the theoretical framework of the order in a feminist sense and giving the woman a real unilateral right to the embryos. Claiming the equal role of father and mother, Annamaria Bernardini De Pace criticised the court’s decision in La Stampa because it ‘responds exclusively to the woman’s selfishness and not to the interests of the child to be born’, who will ‘know the conflict first rather than the harmony of its parents’. In essence, it would be good if the frozen child remained where it is if the parents are in a conflictual situation. Finally, the famous divorce lawyer criticises ‘the categorical and untouchable right of the woman to decide, only her, and above all, if her partner is of a contrary opinion, when to abort and when to implant the cryopreserved ova [sic]’. In this regard, the reflection of Assuntina Morresi, a member of the National Committee for Bioethics, who explains the decision to allow the mother to carry on the pregnancy of her frozen embryos despite the opposition of her ex-husband, not on the basis of greater power over the child given to the woman than to the man, but as “a recognition of sexual difference, at least as long as women will carry on the pregnancy” [A. Morresi, «Madre, padre, figlio e la legge 40. Niente tasto cancella», in Avvenire 27-2-2021].

In short, the woman has been given permission to transfer the embryos into her uterus, not because of an asymmetry of rights with respect to the father but because there is no other way to allow the frozen embryos to come out of their frozen limbo and fully resume their life.
The international legal and jurisprudential landscape is mixed, but so far, the prevailing view is that, in the event of divorce, frozen embryos should be considered as a form of property to be administered by mutual agreement of the former spouses [cf. I. Glenn Cohen, Eli y Adash, «Embryo Disposition Disputes: Controversies and Case Law», in Hastings Center Report July-August 2016, 13-19].

Recent Canadian and American judgments are moving in this direction, sometimes complicated by the fact that they involve heterologous fertilisation or surrogacy. In short, it seems that laws on PMA only work well and smoothly if the full value of embryonic existence is denied and embryos are degraded to the rank of human biological material to be shared, donated or bargained for.

In the midst of this biomedical, anthropological and legal chaos, the faint but clear voice of the Court of Santa Maria Capua Vetere in favour of the full human quality and legal relevance of the conceived.

Fr. Maurizio P. Faggioni, OFM
(the original is in Italian)