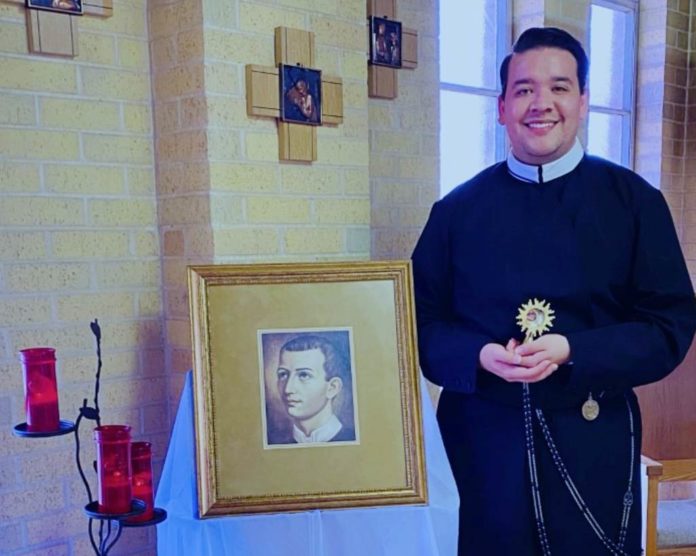 Nine months into his Redemptorist vocation, Br. José Antonio Montoya is learning to trust some sage advice: his vocation as a Redemptorist Brother will shape his ministry. “It’s really amazing,” he said. “Any concerns I may have really do disappear the moment I am ministering.”

Born in Celaya, Guanajuato, Mexico in 1992, Br. Antonio felt called to the priesthood at an early age. He explored a few religious life options and joined the seminary in Mexico, but soon realized that God was calling him to serve as a Brother. He had already met with Redemptorist vocation directors, so he took a leap of faith and joined the formation program in the Bronx in 2017.

“I probably wouldn’t have chosen some of the ministries I have been exposed to during the summers and Novitiate, but I am grateful for each one of them because they have taught me more about myself and what it really means to be a Redemptorist Brother,” he said.

In addition to summer work with Redemptorists in Mississippi and New Orleans, he was very involved in parish ministry during Novitiate last year. He served as a lector at the Spanish Mass and taught religious education to second graders, helping to prepare them for First Communion. He had barely gotten started when COVID-19 swept through the country and the parish was placed on lockdown.

“I had a couple of ZOOM sessions with the second graders, who quickly stole my heart. I was very grateful that the parish opened in late May so I was able to celebrate their First Communions,” he said. “I served as a lector at the Spanish Mass, which we typically celebrated with about 15 people – on a good day. I was a little nervous when the pastor asked me to share a faith reflection during the livestreamed Mass, but I felt calmer when I remembered that the odds were good that no one was watching,” he said with a laugh.

Any apprehension he felt at moving on to the North American theology house in San Antonio late last year dissolved when he reminded himself that he was just joining a different Redemptorist community.

Br. Antonio is currently working on a degree in pastoral ministry. He believes that studying philosophy and theology will help in his ministry, but it also has deepened his prayer life and broadened his understanding and appreciation of his Catholic faith. “The Spirit may move us in a different direction, but I am hoping to earn a Master’s degree in social work and eventually become a counselor. Right now I am trying to stay focused on the moment and my current ministry,” he explained.

While he’s teaching religious education at St. Gerard Parish, it’s a totally new experience for him. “We have a class of middle and high school girls. We discuss the Sunday gospels and emphasize the Catholic faith. The students like that I let them ask me questions about our faith. They are curious about so many issues, and they really enjoy exploring the faith.”

Br. Antonio’s work with unaccompanied minors who crossed the border into the United States and are now being housed at the Freeman Coliseum is a highlight of his formation experience. “It’s very touching to visit and pray with young men from Honduras, Guatemala, Ecuador and Brazil,” he said. “There is such a need, and every kid is different and has different concerns. Some are homesick, some just want to talk to their mothers. After one six-hour session with them, I was hungry and my feet were hurting, but my heart was full. I had never imagined that I would serve in this way, but at that very moment I knew that this is why I became a Redemptorist.”

Br. Antonio is looking forward to serving in Baton Rouge this summer. Once again he will be venturing into unknown territory, but he knows that he’ll be with his Redemptorist confreres, and he trusts that his vocation will shape his ministry.

Photo: Br. Antonio with a relic of St. Gerard at St. Gerard Parish in Lima, OH.