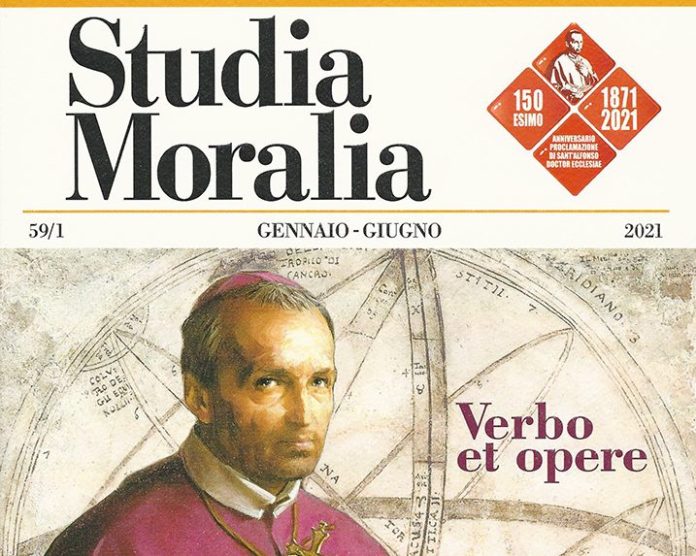 His work is a classic, enjoyed by generations; despite the changing of time, sensibilities and cultures, it always flourishes again. Whether it is music or literature or philosophy or painting, everyone feels the classic as contemporary. This is the case with the endless work of Saint Alphonsus: a complex and varied work in which theology and mysticism, music and poetry are interwoven, but which is made profoundly unified by the cantus firmus that sustains it, that of divine mercy. “Et copiosa apud Eum redemptio”.

The work of Saint Alphonsus, patron of confessions and morals, but first and foremost a believer and pastor, unleashes new riches ever for those who can enter into vital dialogue with him and are not afraid to descend into the depths of his burning heart and ascend to the heights of his sharp mind. While each generation can draw on its riches, it is also true that each generation allows Alphonsus to speak to times not his own, illuminating aspects not yet appreciated or fully understood and giving a topical voice to his unspoken. The return of the celebrations, year after year, cannot be an embalmed memory of the past but a precious opportunity to read and reread an experience, to become aware of a path that has been taken and to move forward along the way. Thus the Alphonsian Academy, a fruitful branch of the Redemptorist Congregation, after 150 years is reliving the auspicious event of the proclamation of St Alphonsus as a Doctor of the Church and feels it owes the Church its message of wisdom and mercy. This issue of Studia Moralia is a contribution to the doctorate celebrations.

In the beginning, we find the words that the Holy Father once again wished to give us to highlight the coherence between some of the qualifying themes of Alphonsian morality and some of the dearest themes of his magisterium: the conviction of being the Church outgoing towards the existential peripheries of every time, listening to the cry of the poor and the deep need for conversion that dwells in the depths of each person. As a demonstration – one would say – of this harmony between Saint Alphonsus and the magisterium of Pope Francis, four interventions are offered, all characterised by suggestive creativity but also by vigilant hermeneutic rigour.

Professor Antonio G. Fidalgo, Redemptorist, proposes a reading of Evangelii gaudium in relation to the missionary inspiration of St. Alphonsus; Dr. Cristiana Freni, in the light of a phenomenological anthropological premise and starting from a spiritual work of the Holy Doctor, L’amore per le anime, searches for echoes of Alphonsus’ mercy in Misericordiae vultus and Misericordia et misera of Pope Francis; Redemptorist Professor Antonio Donato, in collaboration with rev. Giorgio Nacci, puts the vocation to holiness, a central theme in the teaching and apostolic activity of Saint Alphonsus, in dialogue with Christus vivit and Gaudete et exultate; finally, Dr Filomena Sacco, listening to Pope Francis and Saint Alphonsus, proposes the image of God and prayer as a means of dialogue and salvation.

After this group of interventions on Alphonsus’ message’s topicality, we would like to point out two study articles. In the first one, Professor Vimal Tirimanna, starting from the different and opposite reception of Pope Francis’ innovations on the subject of remarried divorcees and the death penalty, asks whether the time has not come for a revision of Catholic sexual morality in the light of Vatican II. The second article is by Professor Faustino Parisi, a former student of the Academy who died in 2018: drawing on the lessons of a master such as Father Domenico Capone, Parisi reflects on the relationship between theology and cultural contexts from the perspective of the question of the foundations of Christian morality.

In the usual space Conferences and Comments, Professor Andrzej S. Wodka summarizes the dense contents of the Study Day organized by the Academy on the occasion of the 150th anniversary of the Alphonsian doctorate. Well-known Redemptorist professors presented the origins of the title of Doctor Ecclesiae conferred on Saint Alphonsus (Alfonso V. Amarante, President of the Academy), Alphonsian morality as it has evolved through the centuries (Marciano Vidal), the relationship between divine grace and human conscience in the process of moral discernment from an Alphonsian perspective (Raphael Gallagher) and the relevance of Saint Alphonsus’ moral proposal (Sabatino Majorano). As Professor Antonio Donato recalled, introducing the day, these anniversary celebrations are an occasion of grateful historical memory and a source of further inspiration to respond to Christ in today’s reality.

In the same area of Conferences and Commentaries, the texts pronounced at an event of high ecclesial significance that fits well into the context of the Alphonsian celebrations, the conferring of the doctorate honoris causa in moral theology on Cardinal Walter Kasper. The President opened the event by underlining how his research as a theologian of moral theology “has touched many fields of investigation, always in a merciful perspective, dear to the school and tradition of St. Alphonsus”. This leitmotif of the great theologian’s intellectual journey was orchestrated and developed in the laudation by Father Michael Brehl, Superior General of the Congregation of the Most Holy Redeemer and Moderator of the Academy. It will be compelling reading the lectio magistralis of Cardinal Kasper in which he retraces his “encounters” with the moral dimension of theology starting from the imprint received by the famous and innovative Law of Christ by Father Bernhard Häring that, first time published in 1954, counterpointed the study of the morality of the then seminarian Kasper. Finally, there are the parting words by Professor Vincenzo Bonomo, Rector of the Pontifical Lateran University.

Some reviews on emerging ethical issues close an issue of the magazine of considerable cultural depth, rich in suggestions and open to some of the most fertile ferments of contemporary ecclesial debate.

Editorial by Maurizio P. Faggioni
(the original text is in Italian)
https://www.studiamoralia.org