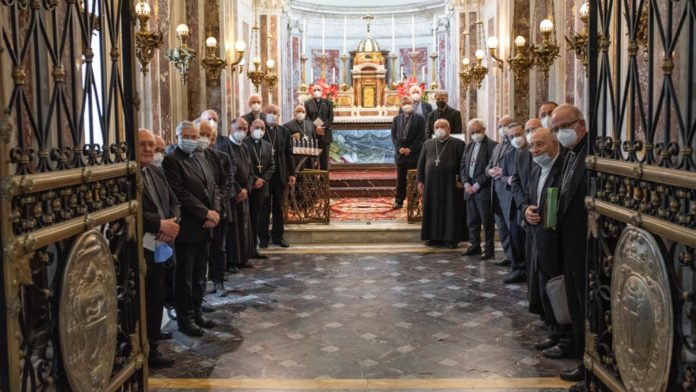 On Friday, June 4, 2021, the Conference of Bishops of Campania, the Italian region where the Congregation of the Most Holy Redeemer was born, held its Assembly at the Basilica of St. Alphonsus in Pagani. The occasion was the 150th anniversary of the proclamation of Saint Alphonsus as a Doctor of the Church (23 March 1871-2021): the twenty-three bishops thus wished to pay homage to a Saint who is the pride of the Church but who also accompanies the fame of Naples and of the Campania Region itself throughout the world. Moreover, the current President of the Campania Episcopal Conference, Monsignor Antonio Di Donna, Bishop of Acerra, is an avid admirer of our Founder, inspiring his pastoral work with the spirit and missionary zeal of de Liguori, and wrote his first pastoral letter dedicating it to Saint Alphonsus.

Before dealing with the various topics on the agenda, the Bishops devoted their attention to the Message sent by Pope Francis to Fr General and the Congregation on the occasion of the 150th anniversary of the Alphonsian Doctorate. A meditation on this text highlighted not only the passage that took place in the existential journey of St Alphonsus as a moralist: from the dilemma between rigorism and laxity to benignity inspired by realism. But also the challenging pastoral and spiritual “lessons” that Alfonso’s magisterium contains today, even in a context so apparently distant from the Neapolitan who lived in the XVIII century: first and foremost, the need to listen to reality and form mature consciences for a Church up to our times.

In the afternoon, after a festive lunch and a second working session, the Bishops returned to their respective seats, making an appointment for 1 August, again in Pagani, where a concelebrated Eucharist will be presided over by the Vatican Secretary of State, Cardinal Pietro Parolin.