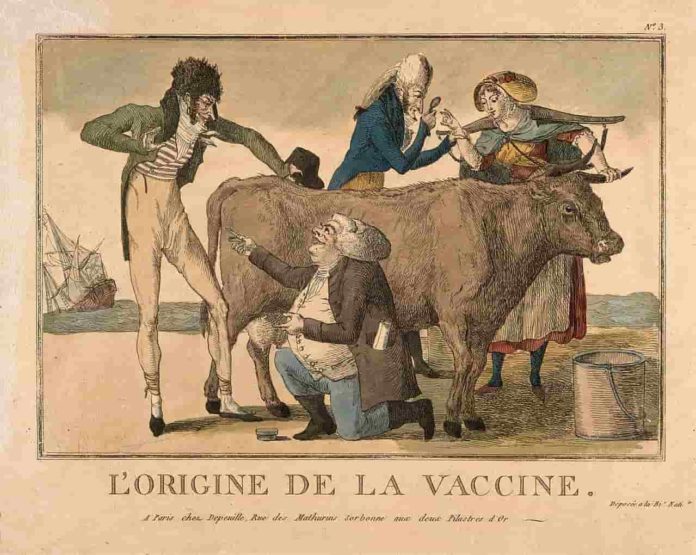 In Europe, the history of vaccinations begins around 1712 with the introduction of variolization – a vaccination practice known in the Far East for centuries – which consisted of infecting healthy subjects with crusty material taken from subjects who had fallen ill with smallpox in a mild form. Variolization was very risky, but in the face of the recurring outbreak of smallpox epidemics with hundreds of thousands of deaths and serious damage to the economy and armies, the practice spread. There were fierce opponents, and there were supporters and, among the latter, Pope Benedict XIV, a man of great culture and sensitivity, who said: “If I were emperor or king, inoculation, because of the advantages I see, would now be allowed in my states. But I don’t want to shock the shy and weak.” An epochal turning point occurred in 1796 when Dr. Edward Jenner, following a popular observation, inoculated in little James Phipps pus taken from the hands of a milking machine that had contracted vaccine smallpox, or cowpox. Later, he inoculated the fearsome human smallpox virus in the child, but the baby was protected. The new vaccination technique was much safer than variolization, and the protective effect very satisfactory. The states, especially where the Enlightenment creed had made the most of it, began to practice it on a large scale.  The paternalistic conception of the typical state of the 19th century made it right to impose the obligation of vaccination as it is appropriate for the common good. Still, it clashed with medical, philosophical and theological controversies. Even E. Kant and H. Spencer were sceptical.

In France, Napoleon in 1805 prescribed that all soldiers who had not already contracted smallpox be vaccinated. In 1834 they did the same as the army of Prussia, and that of the Kingdom of Sardinia and the result was recorded in the booklet of each soldier. The first provisions for groups at risk of the civilian population occurred in 1806 in Italy, in the Napoleonic principalities of Piombino and Lucca, where it was established the obligation to vaccinate all newborns in the first 2 months of life and all the inhabitants of the Principality who had not already been sick with smallpox. Similar measures were taken in Bavaria in 1807 and Sweden in 1816. Not everyone knows that in the State of the Church in 1822, two years after the outbreak of yet another smallpox epidemic, Pope Pius VII made vaccination mandatory in the Papal States. His successor, Leo XII, lifted the obligation in 1824 but kept it free of charge. Pius IX in 1848 promoted a campaign for a vaccination with particular attention to the most disadvantaged sections of the population and, he established a small cash prize – two Pauli – for those who, after having done free vaccination, had returned eight days later to have the doctors verify the success of the same.

The strength of the vaccination obligation was different. In Sweden, for example, refusal to vaccinate was allowed, but for the payment of a fee.  In Germany and France, on the other hand, no derogations were allowed. In the United States, mandatory vaccination was introduced in the early 19th century with differences between state by state. Despite much resistance, the consistency of the vaccination obligation with the citizen’s freedom was confirmed by the Supreme Court in 1907 and again in 1922.  The troubled history of compulsory vaccination in the UK is exemplary. In 1801, the British Army began to adopt Jenner’s technique, but population vaccination met with strong resistance. After a report by [i][ii]the Epidemiology Society in 1853, the Vaccination Act was issued requiring smallpox vaccination in England and Wales. The imposition breathed new life into the anti-vaccination movement that bore medical reasons such as the refusal to place the animal matter in a human or religious body as a violation of the laws of nature created by God, but also mobilized those who did not like the intrusion of the Government into the private lives of citizens. In 1865, 20,000 demonstrators took to the streets. Cash fines were placed – with little success – to bend the kidneys. Opposition to vaccination or not was one of the criteria for choosing candidates in general elections. In 1889 a Royal Commission for Vaccination was commissioned to study the issue. Only after 7 years of gruelling meetings and comparisons came to the conclusion that vaccination is a good thing. Still, parents could not be forced to vaccinate their children. For parents who “honestly” opposed vaccination, distinct from inattentive and lazy parents, it was recommended to allow abstention from vaccination, maintaining a fine, in the idea that a fine would discourage from the opposition those who were not really convinced.  In 1907 a large group of anti-vaccination Parliamentarians lifted sanctions against parents who did not vaccinate their children, but this resulted in a collapse in immunization, so much so that in 1946 the mandatory anti-smallpox vaccination was reintroduced, and then abandoned again in 1971 because of the risk of smallpox was low. The risk of side effects was reduced. The alarmist voices spread among the public about a relationship between vaccinations and autism caused children’s vaccinations against measles, mumps and rubella to collapse in 2003, so much so that they considered the desirability of their obligation. Still, the conclusion of the British Medical Association was, however, that vaccines should be administered voluntarily.[iii]

This orientation of the British Medical Association is the prevailing one among jurists and bioethicists as already stated in 1995 by the National Committee for Italian Bioethics, according to which mandatory in certain circumstances would be legitimate and reasonable, but, at the same time, hoped “the transition from the mandatory regime to that of spontaneous adherence by the majority of the population” (CNB, 2005). Without prejudice to these positions, the problem of mandatory vaccination is becoming more and more important in the West in the context of the Covid-19 pandemic, especially in relation to the immunization obligation for operators of health professions.

We shall come back to the subject of compulsory vaccines on another occasion. Still, I believe that we must make a preliminary distinction between the legal and political level and the ethical plan and, therefore, between coerced to vaccinate, which derives from a rule outside the person and a sense of responsibility which bases a moral obligation to resort to the vaccine. From an ethical point of view, the use of vaccines is regulated by the same rules that regulate any other form of therapy. As health is a fundamental good of the person, caring for himself and the people entrusted to us is a reasonable act and constitutes a serious moral responsibility. The means by which to take care of oneself are chosen based on a general proportionality criterion in which biomedical factors, circumstantial factors and personal factors play. No one would say that it is mandatory to undergo an appendectomy for a person who does not have acute appendicitis. Still, if appendicitis arises, then it is appropriate clinically and dutifully necessary, in principle, to undergo an appendectomy. However, while appendectomy surgery is still clinically appropriate, it cannot be said that it is irresponsible who did not practice it because they are on a study trip to the centre of the tropical forest and are unable to access adequate medical supervision. When it is talking about vaccines, therefore, it is misleading to say that vaccines are in principle morally non-compulsory, just as it would not make sense to say that they are in principle mandatory. In the case of biomedical interventions, we cannot talk about obligations or obligations absolutely without specifying individual situations: if a certain vaccine represents for a certain subject – according to expert doctors – the only valid defence against the risk of contracting a certain serious infectious disease, there is a moral obligation to receive it.  If, for example, yellow fever is endemic in a certain country, there is generally a moral obligation (as well as a legal) obligation for all travellers going to that country to get vaccinated against yellow fever. In contrast, the same obligation does not exist for those travelling on the French Riviera. In the case of endemic or epidemic diseases, the obligation to take care of one’s health by appropriate and proportionate means is accompanied by the obligation of solidarity to provide, as far as I am aware, for public health, a non-secondary component of the common good. Correctly, therefore, it is stated in the New Charter of Health Workers in n.69 that “from the point of view of the prevention of infectious diseases, the development of vaccines and their use in the fight against such infections, through a mandatory immunization of all the populations concerned, undoubtedly represents a positive conduct” (our italics). Finally, if a person cannot get vaccinated for medical reasons (e.g. immunodepression) or for subjective reasons (e.g. repugnance towards vaccines involving the use of cell lines of embryonic derivation), the responsibility remains equally towards themselves and others to take all precautions not to become ill and not to contribute to spreading the contagion.