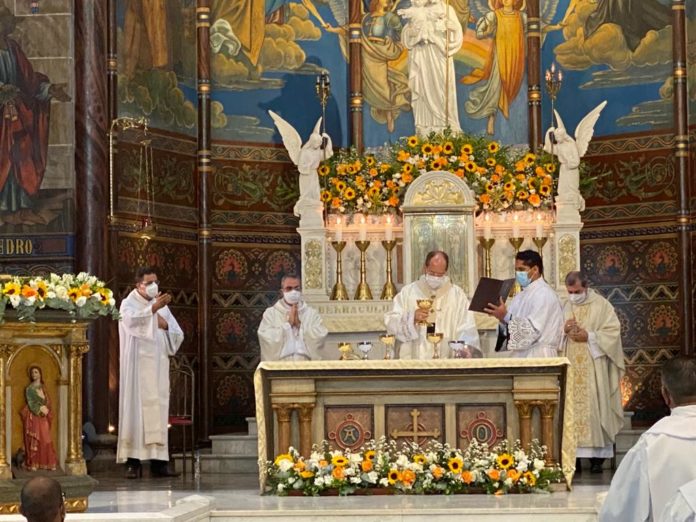 A solemn Mass at the Sanctuary of St. Joseph in Belo Horizonte (MG) marked the celebration of the 70th anniversary of the foundation of the Rio Province and the opening of the Jubilee Year on the morning of 29 June. The religious ceremony was presided over by the Archbishop of Belo Horizonte and President of the Brazilian Conference of Brazilian Bishops, Dom Walmor Oliveira de Azevedo, and concelebrated by the Redemptorist Missionaries. Among the concelebrants were present the provincial superiors: Nelson Antonio Linhares, C.Ss.R.), of São Paulo (Fr. Marlos Aurélio, C.Ss.R.) and of Bahia (Fr. Roque Silva, C.Ss.R.), as well as the Auxiliary Bishops of Belo Horizonte: Vicente Ferreira, C.Ss.R., Giovane Luis da Silva and Nivaldo dos Santos Ferreira. Representatives of the Redemptorist Lay Missionaries and the Redemptorist Missionary Youth also participated in the celebration.

“We are happy to open the Jubilee Year of the 70th anniversary of the Province of RJ-MG-ES. Looking to the past, our hearts are filled with gratitude for the Dutch Missionaries who implanted the mission and the Vice-Province in these Brazilian regions, beginning with Juiz de Fora (MG) and then spreading to the other cities and states. We are grateful to all the Brazilian confreres who also worked and dedicated themselves; many of them have already passed away.”, affirmed the Provincial Superior of Rio de Janeiro, Fr. Nelson, C.Ss.R.

He recalled Fr. Lucas Veeger, C.Ss.R., who was named the first Provincial. Then he emphasized the importance of looking at the present with much realism, thanking each confrere for the serious and responsible work done in Redemptorist parishes and shrines. Fr. Nelson stated that he looked to the future with hope, especially in view of the restructuring for the mission, with the union of the Redemptorist Units of Rio de Janeiro, São Paulo and Bahia. Following this, the Provincial read a message from the Redemptorist Superior General, Fr. Michael Brehl, C.Ss.R., congratulating the Province on its seventieth anniversary.

CLICK HERE and see the photos of the 70th Anniversary Mass of the Rio Province!

Video of the 70th Anniversary Mass of the Rio Province – YouTube