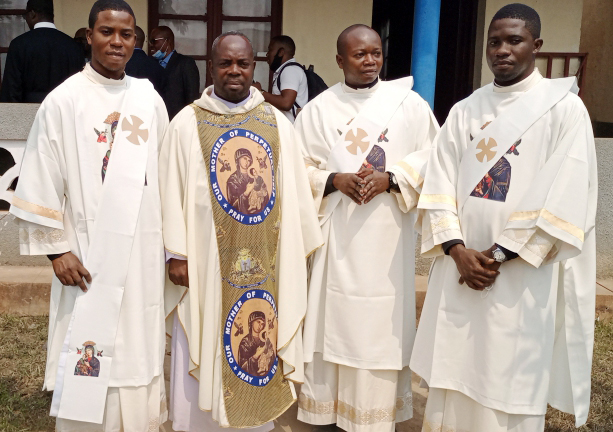 There were events such as Perpetual vows, ordinations, retreats, and welcoming of novices in the vice province of Matadi which embellished the week of July 30 to August 6, 2021. It was about the preparation for the final vows of our three confreres, the taking of vows, the sacred order, and the retreat of all the confreres of the vice-province led by His Lord Jean Crispin Kimbeni, auxiliary bishop of Kinshasa. Many events followed one after the other during this long period.

After a period of discernment and commitment in Redemptorist parish communities, Brothers Kiangebeni Léandre, Mukala Jonas, and Fidèle were on a preparatory retreat for the final vows for a month without going out or resting. Four confreres had been appointed to accompany them with special teachings, sacraments, and celebrations to lead them to deepen the meaning of their commitment to the Redemptorist community and the apostolic life. Father Victor Mampuya, vice provincial councilor, took care of the introduction to this rich and decisive time, Father Paul Kiaku, the chaplain guided them for the second week, Father Daniel Bongo, formator in the Pre-Postulancy, spent the third week in their formation and teaching and Father Moïse, the vice provincial vicar, closed with a double preparation for the receiving of final vows and then diaconate and priestly ordination consecutively. It is in this last week that Deacon Trésor Nlemo had joined the group of other brothers to spend time together preparing for sacred orders. The celebration began on July 5 at the Saint Gérard center of Kola in Mbanza-Ngungu, this time of retreat has been crowned with the receiving of perpetual vows on July 30, 2021, at 5:00 p.m. at the parish of the Sacred Heart of Mbanza-Ngungu. The Very Reverend Fr. Jean Robert Diyabanza vice provincial superior presided over the Eucharistic celebration and received the final vows and commitment to the perseverance of our three confreres who now have everything in common with the Redemptorists. In the presence of our confrere, Ky Raphaël accompanied by six brothers retained by the vice province of West Africa, to begin with, the five others of the vice province of Matadi a time of novitiate in the Democratic Republic of Congo.

On Sunday, August 1, 2021, on the feast of Saint Alphonsus at 9:00 a.m., the celebrations took place at the same parish of the Sacred Heart where His Excellency Jean Crispin Kimbeni, auxiliary bishop of the archdiocese of Kinshasa, the Christian faithful, families, priests, men and women religious and all the Redemptorists were present to celebrate the diaconate ordination of our brothers  Jonas, Leander, Fidèle and the priestly ordination of Fr. Trésor Nlemo. Likewise, 23 years ago the vice province of Matadi celebrated the centenary of the presence of the Redemptorists in the Congo by ordaining three confreres on our patronal feast. It should be remembered that these 4 young Redemptorists had done all their philosophical studies in Kinshasa, the novitiate in Madagascar, and the theological cycle at the University Saint Augustin of Kinshasa created by the consortium of religious congregations in Congo. This is the very reason why the date of 1st August was chosen by the vice provincial. It was to mark the feast of our Founder and Father Saint Alphonsus Marie de Liguori and to honor him on the Lord’s Day. In his homily, Bishop Crispin emphasized and reminded everyone of the need for priestly vocations in the Church. “We never cease to desire to enrich the Church with men whom the Lord needs for his mission to evangelize the world, “said Bishop Jean Crispin”. After this beautiful and rich Eucharistic celebration, all our guests, the relatives of the ordained, a few lay Redemptorists and confreres from the vice province gathered at Saint Gérard Center where the Novitiate is located. Then our inseparable orchestra “Friends of the Redeemer” helped us to praise the Lord with dance. And everybody shared a festive meal. On Monday, August 2 at 6.30 p.m. the newly ordained Father Trésor Nlemo in the presence of all the Redemptorist confreres and the Bishop gathered in the chapel of the Saint Gérard Center, and celebrated his first mass, shortly before the beginning of the retreat of all the Redemptorist confreres from the vice province of Matadi.

The retreat of all Redemptorists

If there is a time for rejoicing, for feasting, for gossiping, there is also time for rest and withdrawal to pray and meditate. The vice provincial council had deemed it right to take advantage of the large presence of our confreres at the events of the week from July 30 to August 1st to schedule a retreat for all the confreres of the vice province as is the custom since the founding fathers of this vice province. Taking advantage of the presence of Bishop Crispin, Vice Provincial had seen fit to retain him, after the ordinations, to animate the annual retreat of the Redemptorists. Bishop Jean Crispin had agreed to speak to us with a wide-open heart. A man of deep faith and calling himself a friend of the Redemptorists since the Saint John XXIII Seminary in Kinshasa were benefiting from the spiritual accompaniment of our Belgian Confrere Eddy Bijloos, professor of liturgy in his time at the Seminary. Bishop Jean Crispin animated this retreat while unpacking his spiritual baggage with rich experiences and profound learnings. With the theme: “Setting apart to be with the Lord”. The theme ran through all through five days of prayer and reflection.

It should also be noted that the vice province of Matadi received six brothers from the vice province of West Africa during the same period and Father Raphaël Ky as their novice master, to begin with, five other Congolese brothers a special time of novitiate in Congo. The newcomers are from Burkinabè, Togolese and Beninese nationalities. In order of nationality and importance of several groups for the novitiate we can cite: from the DRC Sébastien Ndombasi, Jean-Paul Luwesi, Romain Muanda, Baudrick Mansiantima, Augustin Buempanga / from BURKINA FASO Charles Bassano, Pascal Tandamba, Victor Sawadogo / from BENIN Jean Batcho, Bernard Fanou / and from TOGO Désiré Berandao. Father Raphaël Ky from Burkina Faso will be their Novice-master and Father Eudes Bisambu from the DRC as their socius. The start of the novitiate is scheduled for August 15, 2021.