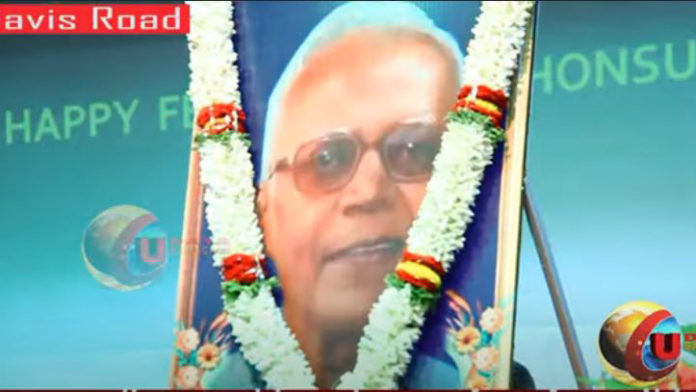 (India) The Redemptorists of Bangalore along with migrants and other faith communities remembered and paid tribute to Fr. Stan Swamy on the 31st of July on the feast of St Ignatius. Fr Stan a Jesuit tribal defender who was arrested in October 2020 on false charges of “sedition” and died on July 5 in detention, awaiting bail on trial, in a hospital in Mumbai, western India. The Jesuit worked for more than 35 years in Jharkhand, eastern India, for the justice and wellbeing of tribals. He is the iconic figure for all those who work for the tribals.

A few days before the prayer session, the president of the Asian Catholic bishops noted that Fr. Stan followed in the footsteps of Mahatma Gandhi, who was also “arrested and imprisoned under sedition laws by British officials.” Fr. Stan, with his “deep compassion for people on the fringes,” is the “latest saint of contemporary India’s impoverished.” According to them, the Jesuit priest “redefined his priesthood, extending his altar to the streets and hills of those odious corners of injustice, breaking the bread of good news of human dignity and justice, particularly among the indigenous (tribals, Adivasi) people.”

To commemorate Fr. Stan, a group of confreres (Frs. James Kumar, Peter Balaswamy, Joe Beck, and myself) organized a team to carry out the task. Fr. Edward, the provincial of the Bangalore province was much more receptive when the team contacted him through email and presented the proposal. In the letter, he said, “It’s a great idea to pay tribute to a wonderful person who stood for justice and human rights”. “The group sprang into action to prepare for the occasion. The Redemptorists’ media team also volunteered to share their digital platform to provide the service with a live stream.

The team’s goal was very apparent from the start. The program’s goal is to be free of political motivations. We made it clear that the event would be only for prayer. This clarity enabled us to avoid any political motivation. For a variety of circumstances, we decided to hold the program on July 31. The day before the feast of St. Alphonsus, our founder, who, like us, advocated for the poor and the most abandoned. It was the feast of St. Ignatius Loyola, to whom Fr. Stan belonged. On that momentous day, the team felt it was appropriate to pay our respects to him.

On that day, we began the prayer session with an introduction that explained the program’s purpose. After the introduction, a Kannada video prayer song “Nimagagiye Baluve” was played. This song is written and composed by Fr. Peter. B C.Ss.R. The song highlighted the message that saints and Holy people like Fr. Stan Swamy SJ lived their life for God and Humanity. And so each one of us is called to live for the same cause. A few dignitaries and a representative from the migrant community were asked to ignite the lamb. It was followed by a video presentation that highlighted Fr. Stan’s struggle and desire for social justice. One of our provincial consulters, Fr. Ignace Dung Dung CSsR, gave an inspiring address. He brought up a crucial element of Fr. Stan’s life and how it might have ramifications. Through intercessory prayer, Fr. James Kumar remembered all of the social and political conflicts taking place throughout the globe. The backdrop scenes showed the struggle of individuals seeking justice and the truth.

Following the Covid-19 measures (SOPs of the government),  we had many laypersons, priests, and nuns participated in a quiet candlelight procession. Floral tributes were paid to his portrait. The prayer session ended with the sharing of provision kits to migrant individuals in need. There were as many as sixty students who received the free android mobiles so that they could attend their online class uninterruptedly during the Covid lockdown period.

“Father Swamy stands today as a symbol of justice for the downtrodden,” one person said. After his death, he became a cult figure in many people’s hearts. Through his constant companionship of Adivasis, Dalits, and marginalized groups, as well as his sacrifice, he offered us a new ethical mandate to be compassionate, to be the voice of the voiceless, and to be human rights advocates. Redemptorists and their collaborators from around the nation joined the online celebration to “stand with Stan,” asking for justice and expressing sympathy with the innocent inmates on trial or imprisoned without guilt. It was a fantastic day!