The Redemptorist community of Chaco, Argentina, participated in a spiritual retreat with the motto: “And they were of one heart”. Among other objectives, the aim was to promote religious vocations in the congregation.

The Alphonsian Retreat 2021 was held in the Sacred Heart of Jesus parish in Villa Angela, Chaco, and throughout the Vice-Province of Resistencia with the motto: “And they were of one heart”.

The retreat aimed to encourage Redemptorist vocations and recognise God’s presence in history and the community.

The four meetings were held in the parish hall “Padre Eduardo” and involved moments of prayer, the projection of videos, games, animations and group work respecting social distancing.

The first meeting began on July 3rd, and the theme was: “The signs of God in my history and that of my community” to “recognise the presence of God in our lives”.

The second meeting, which took place on 10 July, dealt with the theme: “God speaks to us about being one body and freeing our hands” with the aim of “discovering in the present and in the reality in which we live the voice of God who calls us to commit ourselves to him, placing our gifts at the service of the community”.

The following Saturday had the vocational theme to be discussed: “Here we are, Lord, to do your will”, to “discover God’s call in my dreams for the service of the community”.

At the fourth meeting, on 24 July, the theme was: “We want a single heart” with the aim of “sharing the desire for holiness, and making concrete proposals to be fulfilled in the community after the retreat”.

To conclude, on Saturday, July 31, a day was held in the chapel of St. Alphonsus, where the young people presented animations and shared a hot chocolate. The meeting concluded with adoration of the Blessed Sacrament, and a Mass presided by Father Raúl Alcaraz C.Ss.R.

The retreat concluded with a virtual meeting through Zoom with all the communities of the Vice-Province, and a Mass presided over by the Vice-Provincial, Fr. Javier Machado C.Ss.R. 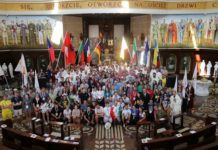 Go&Share! – European Meeting of Redemptorist Youth in Toruń has ended 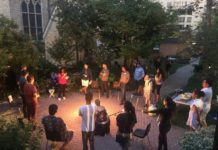