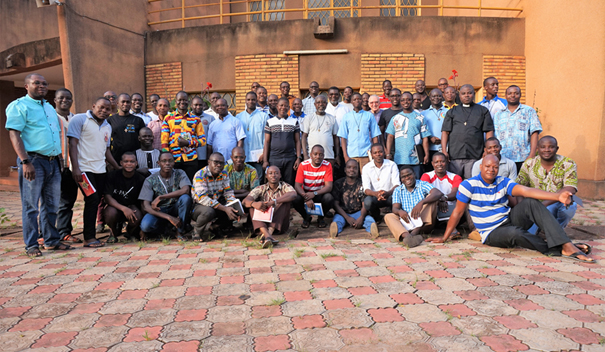 The confreres of the Vice-Province of West Africa, made the spirit-filled renewal retreat at the major Diocesan Seminary of Saint John the Baptist of Wayalghin, for eight days, from August 29th to September 6th, 2021. Since the religious life has its roots in Christ, everything must start from Christ. This is how, after hard work in the various places of mission, after preaching missions and being with people for long, one needs to recharge oneself to rediscover the true ways of living this commitment in the Lord. Therefore, the retreat of the members of the Vice-Province of West Africa (VPAO) was an opportune time to be together to renew and reaffirm our Redemptorist identity.

“Let us welcome Christ the Redeemer, let us jubilate in hope. You, Our Lady, come to our Help!”

This quote is linked to the theme of the 75th Jubilee year of the Redemptorist presence in Niger and Burkina Faso. It is in an atmosphere of meditation that on August 29, 2021, the eight-day retreat opened. Father Alain FONTAINE, Missionary of Africa conducted the eight-day retreat. The hymn to Saint Joseph by Jean Claude GIANADDA solemnly opened this retreat. It is the will of the preacher as he explained: “I would like to invite you to pray to Saint Joseph. Why? For two reasons: the first because Pope Francis invites us to honor him particularly in this year of St. Joseph and also because he is the man of silence, the man who mysteriously enters into the plan of God and the will of the Father. He becomes a model of a father and teaches us fidelity, the righteous man.”

During these eight days of reflection, the preacher turned the gaze of the participants to the Redeemer and the theme of Redemption. The topic of the first day was the saving plan of God to humanity. God’s salvation is experienced as a liberation, a victory over evil and the forces of death. It is not only a question of spiritual combat and the remission of sins, but of bloody combats where the adversary must be crushed.

If God saves, Father Alain understands that God is beyond the present gift, because he is the promise of the future. We learn, then, with him that “by this very fact salvation is the revelation of God. Thus in the gesture which liberates, and as explained it, God reveals himself: “I am the Lord who am your God, for having brought you out of the land of Egypt, of the house of bondage: you will have no other gods in front of me”(Ex 20, 2-3).

If God saves, he is the God who binds himself to me. Hence it appears that the most fundamental component of the experience of salvation is the covenant. Moreover, for the Missionary, God’s decision to bind himself to us, to me, is the heart of revelation. It is both the foundation and the fruit of liberation.

In the afternoon, the Parable of the seed according to St. Mark was the theme of meditation. The parable presents us with the message of salvation. Whoever speaks of salvation deals with Redemption, as we know. So, the preacher emphasized that Redemption is the covenant relationship that God wanted to have with us. It is the covenant promised, and continually maintained. The righteousness of God leads to salvation. However, it is the justice of God that justifies us. In this sense, we must remember with him that the justice of God is not his vengeance nor the distributive justice of Roman law either. Rather, that of the biblical tradition of saving justice.

In general, it is a question of remembering that the eight days of spiritual retreat helped all the participants to deepen the knowledge of Redemption: Christ’s salvation for all people.

Since the Vice-Province of West Africa celebrates 75 years of the presence of the Redemptorists in Niger and Burkina, Father Alain Fontaine, included this major event in this eight-day spiritual renewal. He then stressed the patience of the elements that make up this Unity which allows them to taste the fruits after 75 years of hard labor. However, he reminded us that there is still a long way to go because they have never accomplished the proclamation of the Word of life. Thus Fr. Alain invited the retreatants to enter into deep intimacy with Christ the Redeemer. Certainly, as a disciple of the Redeemer, one needs that lasting intimacy of which Saint John speaks in his first letter: “What was from the beginning, what we have heard, what we have seen with our eyes, what we have contemplated and what our hands have touched with the Word of life, we announce. (1Jn1: 1) that means it takes a long companionship with Jesus before one starts to talk about Him, to announce Him to bear witness to Him.

As redemption concerns all people and life situations, Father Alain FONTAINE too spoke of mercy, selfless service, community life, the relationship with Mary our Mother and the disciple of Christ, of Saint Joseph “the just man who carries within him all the patrimony of the ancient covenant”, of the Holy Spirit without whom, it is not possible to advance on the path of the redemptive mission; of ecology, referring to Laudato Si, etc.

The celebration of reconciliation followed with the blessings of our Yom Kippur by the preacher which was a wonderful moment of this retreat. He included the burial rite which was an adaptation of the oriental rite. All prayers and rites were helpful for deep spiritual renewal.

We can say that this time of retreat was a time of grace, a new impetus, to live with Christ the Redeemer.

The retreat ended on the evening of September 6, then followed by a two-day assembly by the Unit. From September 7 to 8, the confreres emersed to shed light on gray areas; to build a strong Unity, and ready to continue the work of the Redeemer as entrusted to us the Redemptorists.