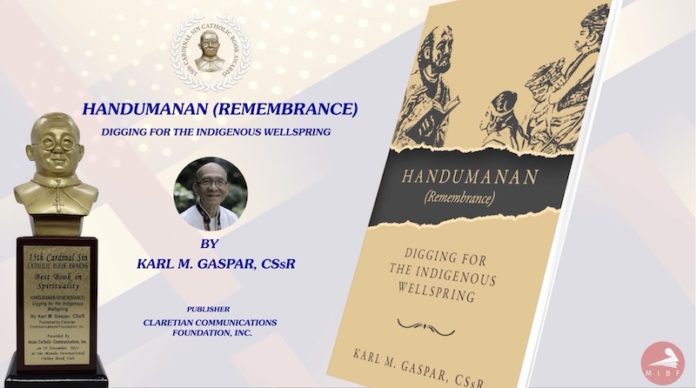 (Davao City) Redemptorist Brother Karl Gaspar won in the Spirituality Category of the 15th Cardinal Sin Catholic Book Awards with his book entitled Handumanan (Remembrance): Digging For the Indigenous Wellspring. The Davao City-based Gaspar writes a column in English (A Sojourner’s View) and occasionally in Cebuano (Panaw-Lantaw) for MindaNews.

Books under the Spirituality category are those that “serve and deepen prayer life, edify spiritual growth and give guidance and light to a real Christian life, including works in prayers, meditations, lives of saints and the likes” while those under the Ministry category are those that “illustrate or document the varied forms of Christian ministry in the Philippines, including faith-based advocacies, social/civic apostolate and projects.”

It recognizes  “authors/publishers whose work promote total human development, Gospel values, and Filipino culture, through the effective use of the latest communications technology in book publishing.”

The CSCBA was initiated by the Asian Catholic Publishers, Inc. (ACPI), which was founded by Jaime Cardinal Sin, the Archbishop of Manila,, who played a crucial role in ending the Marcos dictatorship in 1986.

Re-organized in 2006 as the Asian Catholic Communicators, Inc. (ACCI), the association revived the awards and renamed them the Cardinal Sin Catholic Book Awards.