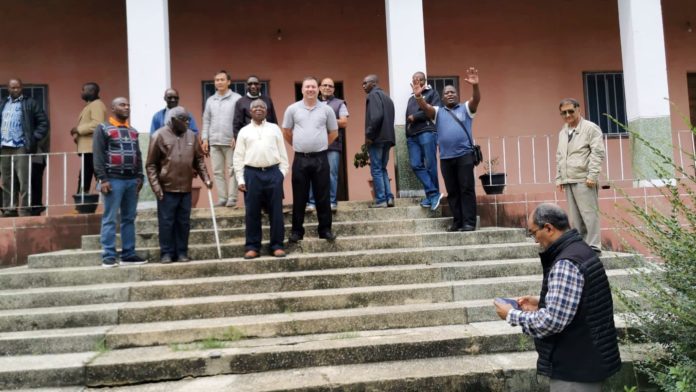 Fathers Nicolas Ayouba and Rogério Gomes, from 5 to 21 November, at the request of the Vice-Provincial Superior, Fr. João Pedro Fernandes, made a canonical visit to the Vice-Province of Luanda. It was the first canonical visitation carried out in the Congregation after the confinement due to the COVID-19 situation.

The Redemptorist Mission of Angola was founded by the then Vice-Province of Lisbon, belonging to the Province of Madrid. The first group of missionaries (four priests and two brothers), Portuguese and Spanish, arrived in the port of Luanda on 9 December 1954, at the request of the bishop of the diocese of Silva Porto (now Kwito-Bié), in the centre and south of Angola. From there, they went to the mission of Cúchi, in the extreme southeast, where they settled on 7 January 1954. Manuel García y García was the vice-provincial superior in Lisbon, who, at the end of his term of office, went to Angola as a missionary (1956) and founded the large Mission Hospital in Vouga (1961) and a branch in Humpata (1972). On 16 January 1966, the Redemptorist Mission of Angola was established as the Vice-Province of Luanda.

At present, the Vice-Province is composed of 6 communities and one residence. The Redemptorists live in Luanda, Huambo, Humpata, Menongue, Cuito-Bié and Vouga. Three of them have pastoral and formation communities (Huambo, Humpata and Cuito).

As for the number of confreres, we have 27 perpetually professed. Among them there is one brother, three foreign confreres (1 Brazilian, 1 Vietnamese and 1 Portuguese, archbishop emeritus). There is one confrere living in the province of Lisbon. There are nine confreres in temporary vows in Burkina Faso and Madagascar.

The work of the vice-province is concentrated in the urban parishes (Luanda, Huambo) and in the rural parishes (Menongue and Vouga). The urban ones with their various communities (chapels/catechesis) on the outskirts (Cuito), and the rural ones with the missions (Menongue and Vouga), which cover several villages, requiring the confreres to travel long distances with very difficult itineraries. As far as pastoral assistance is concerned, many lay people (catechists) collaborate in various tasks (catechesis, coordination of the different pastoral activities) and religious.

There is a good group of young people in initial formation: in the Propaedeutic of Cuito with 11 young people; Philosophy in Huambo with 21; Novitiate in Humpata, provisional, approved by the General Government, due to the COVID-19 pandemic. There are six novices: 4 Angolans and 2 Mozambicans. Theology has been based in Burkina Faso for the last decade with three students in temporary vows and, lately, in Madagascar with six students in temporary vows.

These days of visitation were significant. Each confrere was able to tell a little of his story and share his joys and the challenges he experiences daily in the Redemptorist community and pastoral work. We met with the leaders who work with us in the parishes and missions.

The visit concluded with the Vice-Provincial Assembly in the mission of Vouga. Present were the confreres of all the communities and Fr. Jorge Martinez from the Mozambique Mission. The Vice-Provincial Superior presented a general report on the situation of the Vice-Province, followed by the impressions of the Visitors and the presentation of the reality of Mozambique by Fr. This was followed by group work, the closing Mass and a fraternal lunch. This was followed by meetings with the Secretariat of Finance, Formation and the Ordinary and Extraordinary Councils.

The Vice-Province is a young and lively unit. There is much energy in the confreres and a desire to do well. There are challenges! And the challenges are not problems but a call to look for solutions, to improve more and more. The challenges call each confrere to co-responsibility and, with joy and enthusiasm, to move forward.

May the Vice-Province continue to respond to its mission of announcing plentiful redemption. May it be so!