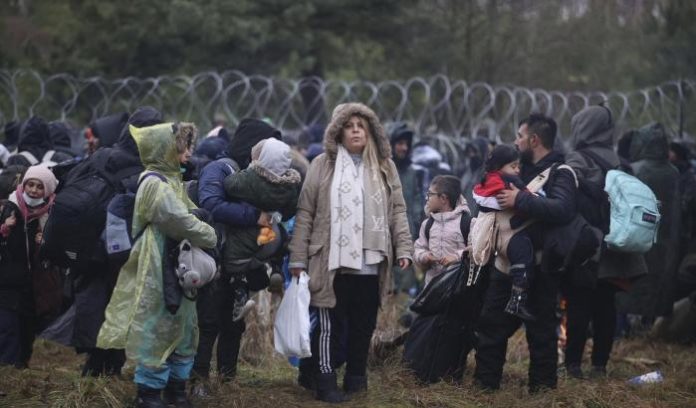 Every day in these latitudes of Europe, or rather Eurasia and we could also say “Eurafrica”, as well as in other parts of the Americas; we witness the drama of “forced human migrations”, generating that “annoying” category of so-called “immigrants”, but who, because of that stubborn mania for formalities that mask reality, are de-individualised and placed in the profile of invading and dangerous groups. Thus, whether they want to or not, they are dehumanised. Therefore, we do not talk about their lives, their stories, their concrete faces, but about the problem of “clandestine” immigration, border control, “national security”, and similar epithets that are the result of geopolitical instrumentalisation and ethnic and socio-cultural self-referentialism. What is happening on the borders of Belarus and Poland, as well as on a daily basis in the Mediterranean Sea, is less and less excusable, it is the greatest nonsense – without any justification whatsoever – of present history.

This is why the proposal and the appeal of Pope Francis in “Fratelli Tutti” (30-10-2020) becomes more than ever urgent and necessary, it needs to be communicated and expressed in the best possible ways (cf. FT, nn. 80-86). Theology, pastoral ministry, ecclesial actions and institutions should be at the forefront of this commitment. We know that there is much in this regard, and this is appreciated, but at the same time the reality is so pressing and insulting that it calls for even more.

What is happening with the “frontiers” of this world of ours is nothing more than a reflection of our inability to manage our own frontier selves and, most dramatically, our failure to mature towards new and better horizons of human fulfilment. Another sign of this is the insufficient, although from a certain point of view positive, steps taken at Cop-26 on the ecosystemic issue.

Pope Francis’ call is to assume that it is possible to project a life without borders, a system of life without borders. But for this to happen, dignity must be brought to the frontiers and dignity must be rethought from the frontiers, and not from the classic dehumanising centrisms (cf. FT, nn. 20; 35; 37-41; 121-123; 129-153). It is a commitment to “social friendship”, to a fundamental “openness”, to a constant and systemic “inclusion”, transcending mere opportunistic relationships of associates for profit interests and petty socio-cultural and geopolitical systems. As Francis says: “To see things in this way brings the joyful realization that no one people, culture or individual can achieve everything on its own: to attain fulfilment in life we need others. An awareness of our own limitations and incompleteness, far from being a threat, becomes the key to envisaging and pursuing a common project. For “man is a limited being who is himself limitless” (FT, n. 150).

May we, from our Academy, from the different spheres and strata, listen to the Pope’s appealing call: “Each one of us is called to be an artisan of peace, by uniting and not dividing, by extinguishing hatred and not holding on to it, by opening paths of dialogue and not by constructing new walls” (FT, n. 284). We need an Eco-theology-Moral, human and ecosystemic, integral and liberating and, above all, audacious, which is not only a discursive “blah-blah-blah” but a real and meaningful commitment.