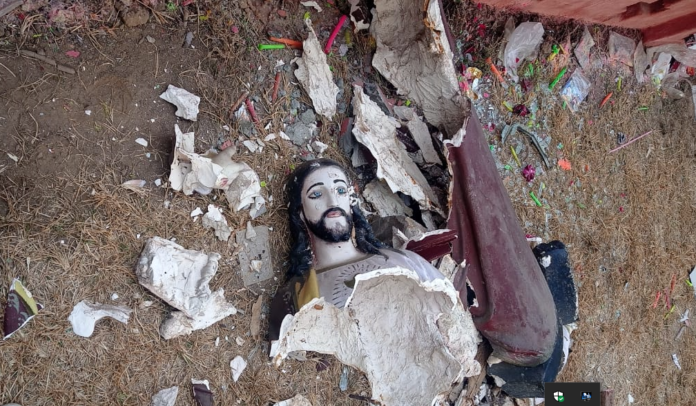 (Haryana, India) In the early hours of 26th December, we received tragic news. On 25th December 2021, the Redemptorist Church of the Most Holy Redeemer in Ambala, Haryana State in India was vandalized and the statue of Jesus Christ was broken and desecrated. According to the CCTV (Close Circuit Television) footage, 2 male figures are responsible for the intentional damage in the time period 0030 to 0140 am, just after midnight. A complaint has been formally launched with the Police who have begun their investigation and are following through with the CCTV footage. It has been reported in the National News Agencies, with some opining it as a religious hate incident. This will need to be confirmed with the police investigation.

This has created a deep sense of hurt and distress, within our Redemptorist community and among the Christians. What is painful is that this is seen as part of a pattern of attacks on Christian Churches and institutions in India in recent times. The local Bishop of Simla-Chandigarh together with some Church officials – visited the vandalized Church and spent some time with the people there. It is our hope and prayer that the leadership at the Central and State level will promptly condemn these attacks, lest the attackers are emboldened to cause further damage and destruction to the secular fabric of the country.

What was meant to be a joyful Christmas occasion has turned into a painful time. In some way, this reminds us that this is part of the Christmas story as the new-born Jesus and his family faced attacks and persecution too. Besides pursuing the matter with the government authorities, the Redemptorists in India and especially the entire Province of Bangalore stand in solidarity with the Confreres and faithful of the Church in Ambala. There will be a Prayer of Reparation for the desecration of the Church and the Statue of Jesus. It will also be a time of Intercession for a climate of religious tolerance, a halt to the hate attacks not only in Ambala but the entire country. We invite all the members of our larger worldwide Redemptorist family to join us in this prayer, even as you stand with us in solidarity.