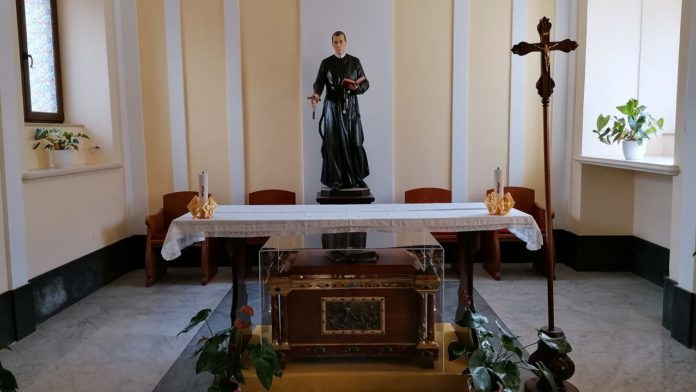 On 19 January, Mgr Andrea Bellandi, Archbishop of Salerno-Campagna-Acerno, erected a Diocesan Shrine in our Church of the Holy Trinity in Ciorani, under the title of Blessed Gennaro Maria Sarnelli.

The Redemptorists of the community at the mother house of the Congregation have accepted the unhoped-for gift with great gratitude. Since 1994 they have been custodians of mortal remains of a courageous witness to the faith, and a heroic social worker such as Blessed Gennaro was in 18th-century Naples. Moreover, those who know the history of the Congregation know, that Ciorani was for eight years – from 1735 to 1743 – the only secure property of the Congregation, although to be precise, the construction work on the house ended in 1738. From here, the first Redemptorists, having committed themselves to the founder to continue the Redemptorist mission at all costs (1740), made the first extraordinary and generous missionary outreach to the surrounding region, so much so that at first our confreres were called “the cioranists”. All this was possible thanks to the deep friendship that bound Saint Alphonsus to Baron Sarnelli’s sons, Father Andrea and Father Gennaro: a friendship that allowed the donation of the land to build on, as well as a first income.

Since the remains of Blessed Gennaro were transferred from the Church of Napoli Tarsia to Ciorani in 1994, the local people have become familiar with this Blessed. The faithful from the surrounding areas have had occasion to learn more about him. A few years ago, a new statue of Bl. Gennaro, produced by a workshop in northern Italy, was exhibited for veneration. Then, the chapel that houses the precious urn, has been completely renovated. Many Redemptorists from all over the world were able to make a “pilgrimage” to this tomb, especially during the Spirituality Courses.

At present, these and other initiatives are at a standstill because of an interminable pandemic. The hope is that a “blessed normality” will return as soon as possible, so that all of us – beginning with the Neapolitan Province and the community of Ciorani itself – may deserve the gift of this title of “Shrine”; and spend our best energies to know and make known this extraordinary witness of faith, who embodied the Redemptorist charism in a singular way, before our Congregation itself was recognised by the Church.