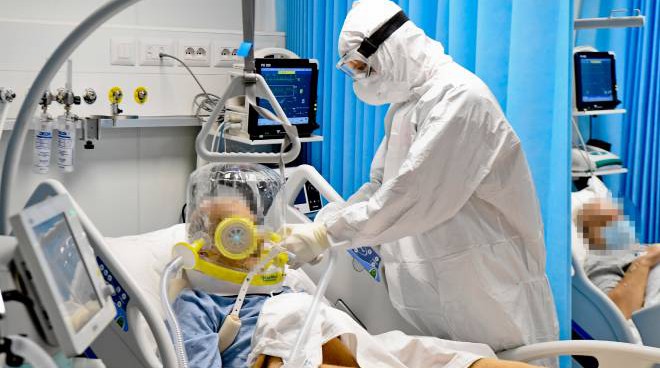 At the time of Covid-19, coinciding with the recurrent waves, the drama of the scarcity of therapeutic means compared to the demand and the need to select the patients to be started on the available therapies comes up again. In Italy, despite the intensive vaccination campaign, there is still a hard core of ‘no vax’ people. During pandemic waves, the no-vaccine patients contract Covid-19 in much more serious forms than the vaccinated, so that in the last month, intensive care units have once again been filled with serious Covid-19 patients, 70-80% of whom are no-vaccine patients. The abnormal occupation of the intensive care units prevents the performance of delicate operations that have already been planned and require a postoperative period in the intensive care unit, involves the deployment of a surplus of medical staff to the detriment of other areas of medicine, especially preventive medicine, and absorbs considerable public resources. When one has to face this situation, the first visceral reaction could be to deny the no-vax-people intensive care: they could have been vaccinated, they knew the risks of not being vaccinated and decided not to, but now they have to suffer the consequences implicit in their freely chosen reckless and antisocial behaviour. This logic, not in such a crude form, of course, lies at the heart of a recent letter from the Consulta di Bioetica[1] whose reflections are condensed in this statement: “Those who voluntarily refuse the Covid vaccine know that by doing so they expose themselves to greater risks for which they must take responsibility. It is respect for the choice that makes it necessary to give precedence to those who find themselves calling for help even though they have avoided putting themselves in situations of greater risk”.

The discriminatory logic inherent in this position is clear, which – the text emphasises – is not intended to be the specific one of the Consulta. According to this logic, the right to treatment is not enjoyed equally by every human being simply because he or she is a person but varies according to assessments concerning the motivations and circumstances that have caused his or her need for treatment. Thus, for example, in conditions of burns of equal severity, first a firefighter who has been burned in the performance of a socially useful job such as putting out a house fire will be treated, and then a young man who, having purchased illegal fireworks, has suffered extensive burns as a result of an accidental explosion will be treated.

This discriminatory thinking is certainly not new and is inevitable when rights, such as the right to care, are not rooted in an essential and common quality, that of being a person, but are subordinated to some accidental quality, such as the possession of a cognitive minimum or greater or lesser social utility. In the case of Covid-19, one would like to introduce, among the criteria for selecting sick people, their moral quality: those, who have health problems caused by consciously chosen risky behaviour, are not entitled to more sophisticated therapies or can only access them after the health needs of those who have behaved in a socially virtuous manner and done everything possible to avoid falling ill have been met. This ethical criterion of access to care offered by a national health service is not new: every now and then someone says that AIDS patients who contracted the disease by using infected syringes for drugs or lung cancer patients who smoked tobacco cigarettes for years are not entitled to free care.
In the personalist perspective, it is indisputable that a human right – such as the right of access to therapeutic means – does not depend on the moral qualities of a subject, but on his ontological quality. A person remains a person and does not lose his dignity as a person even for very serious crimes. Not even the worst offender loses his right to life: on this point, after centuries of debate, vast strata of western public opinion and philosophical schools of different extractions have converged. The contrary position, reflected in the terrible reality of capital punishment, has been explicitly rejected by Catholic thought and the Magisterium. “Not even the murderer loses his dignity”, John Paul II stated lapidarily in reference to Cain, “and God himself is its guarantor” (EV 9).

In situations of the relative scarcity of therapeutic means, as happens in disasters or pandemics, it is necessary to ration the available means and to resort to a selection of patients on the basis of appropriate criteria. Good medicine seeks to develop objective criteria based on the clinical condition of the patients and not on more or less arbitrary extra-clinical considerations. In our opinion, the most reasonable general criterion is – to use the words of the Consulta itself – “to give priority to those who are most likely to make it, favouring access to intensive care to those who have the best chance of making use of it”. Obviously, this general criterion needs to be clarified, taking into account the variety of cases, and must be understood within the horizon of distributive justice, however, declined in a personalist and not utilitarian perspective[2] (cf. this Blog).

It is possible that a State decides to offer free treatment, ultimately paid for by taxpayers, to those who suffer harm while performing a public service task, and asks, instead, to pay for treatment to those who suffer harm because they enjoy skydiving or mountain climbing. There is nothing to prevent the state from deciding to organise an expensive rescue operation for a group of humanitarian volunteers kidnapped by terrorists in a war-torn country while abandoning a group of tourists who have ventured recklessly into a war zone to their fate. According to our idea of the common good and the purpose of state organisation, such laws would be unfair laws.
Two final remarks.

(Original is in Italian)

[1] Consult Bioetica, «Covid. Vaccinated and not vax. Who to prioritize in an emergency?” Quotidianosanità.it, 25 January 2022, https://www.quotidianosanita.it/lettere-al-direttore/articolo.php?articolo_id=101507. Specific, for those who are not familiar with bioethics, that this Bioethics Consultation it is private and of secular orientation, not to be confused with the National Committee for Bioethics.