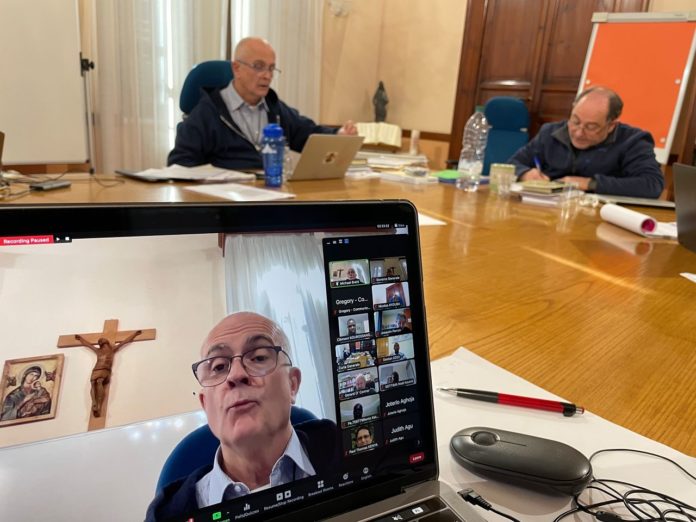 The long awaited first phase of the General Chapter of COREAM finally dawned. Previously the meeting was planned to be held in Nairobi, Kenya at Donum Dei Community in Karen. However, with the new wave of a more fatal variant of Coronavirus namely Omicron the meeting was called off. With the consultation of the Coordinator of COREAM and the General Council, they saw it worth to be held online. All the concerned members were informed of the paradigm shift from physical encounter to virtual meeting. The response was positive and arrangements were made to facilitate an online zoom encounter.

On 17th of January, 2022 the meeting commenced at 1400 Hrs Kenya time. Fr. Joaquim Parron, from Campo Grande Province, and Fr. Bento Katchingangu, from Luanda (Angola) Vice-Province were tasked to be the Moderators of this 1st General Chapter. Fr. Joaquim noted that the Chapter is a precious time for reflection, prayer and decision making. He also remarked that this is an unusual time whereby we are conducting meeting on Zoom and so he requested the members present to be patient with each other, to speak precisely and audibly to give the translators ample time to translate.

Fr. General too had to give his formal opening remarks noting that this is the third time the Conference of Africa and Madagascar is having an encounter affirming that, in 2009, the meeting was held in South Africa, in 2016 it was held in Nairobi and now it is held online because of the pandemic. He reminded the members that they are delegates to the General Chapter and thus the purpose of the meeting is to engage all members in a careful and profound reflection on mission as consecrated for the good of all. Furthermore, he reminded the members that the responsibility of the General Chapter is to care for the interest of all Redemptorists. Thus the decisions to be taken when adopted should bring newness and renewal. Moreover, he held that the Chapter should think of ways of strengthening the bonds within its members and with lay partners in order to create one strong missionary bond. He also noted that we need to evaluate ways of carrying out mission in the Congregation to bring Good news to the abandoned poor as we deepen our relationship with one another.

Fr. Nicolas Ayouba, General Consultor, said a word of welcome, highlighting the importance of the Meeting of the 1st Phase of the General Chapter.

Then, Fr. Noël Sottima, the Coordinator, during the onset of the Chapter presented Chapter members. The members mentioned were 30, which involve 4 members from the General Council, 2 Moderators, 20 COREAM members, 2 Translators and 2 Notaries. Among the members present, there was a lay collaborator namely, Mrs. Judith Ngozi from the Vice-Province of Nigeria.

Moreover, clarity was sort on the members who had the privilege to vote during the first phase of the General Chapter. The Moderator mentioned the General Superior, Major Superiors, Consultors, Coordinator, Vocals, Br. Appointed by General Council and the Procurator of COREAM. Furthermore, the timetable to be used during the meeting was approved.

Fr. General had a chance of giving a report on his tenure as a leader. He began by sympathizing with the Region of Zimbabwe after the tragic accident which took away three of its novices on Christmas Day. He expressed his condolences and solidarity to the whole region of Zimbabwe. He also congratulated the Vice-Province of West Africa on the celebration of the 75th year of their foundation. Moreover, he expressed his view on the online First Phase of the General Chapter and its difficulties and challenges; however he encouraged active participation. He reminded the Chapter members on the topic of restructuring which began in 1991 during the General Chapter in Brazil. He held that restructuring is for mission and not a simple reorganization. Thus it’s a call to conversion and a spiritual process. Hence there is a need of planning together, doing formation and mission in unison for the good of all. Fr. General also acknowledged the impact of the pandemic on restructuring plans but gave hope saying that the pandemic has no last word. In his concluding remarks, Fr. General reflected on the successes and challenges in his last 12 years. He was impressed by the level of trust and relationship among the Superiors and vocals in the Conference. He foresaw a challenge ahead of the Conference on our clarity for mission among the abandoned poor, our collaboration with the lay partners and holistic promotion of transparency, accountability and responsibility among all confreres.

Fr. Noël, the Coordinator, presented also a report on the life of the Conference during the sexennium, highlighting the achievements, the joys, the strengths and the challenges of the process of Restructuring in COREAM.

Fr. Gerry the Procurator of Africa and Madagascar presented extensively on the 2022-2025 Strategic Plan.

During the sessions, members were organized into different groups in order to discuss extensively on the questions posed during different presentations. After the discussion, they appointed secretaries to represent the assigned groups in giving back the report. It was affirmed by the General Council that the discussions were very rich and helpful. After the sessions, there were also other separate meetings held by the Evaluation Commission which gave general observations and suggestions to better the next sessions.

Towards the end of the meeting, the Capitulars cast their votes to approve or disapprove different Postulatas, Report from the Reduction Committee, Strategic Plan, Commission for Economic report and the Liturgical Commission. It was communicated that the Second Phase of the General Chapter will be held in Rome at Il Carmelo from 11th September to 7th October this year.

For sure, this first phase of the General Chapter of COREAM can only be described as prophetic. It has surely addressed many problems relating to our context of mission and evangelization. To bring our thoughts and reflections to fruition, there is no better way than chatting the road to restructuring. By doing so we will have made the first stride towards the right direction of bringing plentiful redemption. It may look impossible but it is possible if we entrust all our plans into the maternal care our Mother of Perpetual help for with her is perpetual succour and with her son plentiful redemption.

Fr. Isaac WANYOIKE, C.Ss.R.,
From the Mission of Kenya