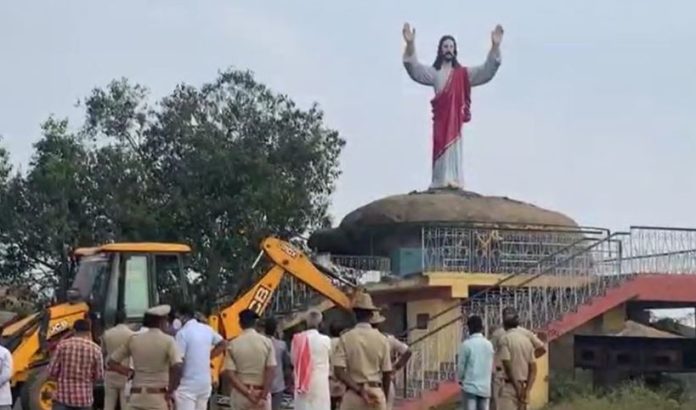 Officials have destroyed a 20-foot-tall statue of Jesus that has been standing in a village in southwestern India for 18 years. The local administration said the statue was built on land reserved as an animal pasture, and claims its destruction was ordered by the High Court. However, Christian leaders from the region say the case was still pending.

The statue was destroyed on Tuesday, February 15, in Gokunte village in Karnataka state, India. As one of the residents told a local television station, the statue was demolished and taken away in a tractor despite asking the local administration to safely remove the statue and hand it over to villagers.

Gokunte village has a population of 500-600 people, and all but four families are Catholic. The statue was constructed next to Gokunte village’s St Francis Xavier’s Church in 2004. According to the villagers, a few pro-Hindu organization members wanted to create tension in the region and filed a plea in the High Court.

“It is truly a painful moment when a statue of the Lord Jesus is raised to the ground by the authorities of the district administration,” said Fr Ivel Mendanha C.Ss.R., the superior of the Redemptorists of the Majella V. Province in Mumbai.

“This is not just any statue but a statue of Jesus. The authorities could have shown more understanding, respect, reverence in approaching the religious leaders and asking the leaders to do the necessary deed of removing the statue from the land if it rightly had the court order,” the priest told Crux.

“That this happens in a country that has for centuries revered every religious tradition and its founders is against the fabric of the culture of India. Is this a new India we are witnessing? Is this an isolated act? Or this a deliberate act motivated by certain vested interests? These are pertinent questions that most people ask, especially the Christian community that has long been and will continue to be a community that seeks to live with peace and non-violence and respect to the law of the land, to the diversity of cultures and religions that constitute the fabric of our nation,” he added.