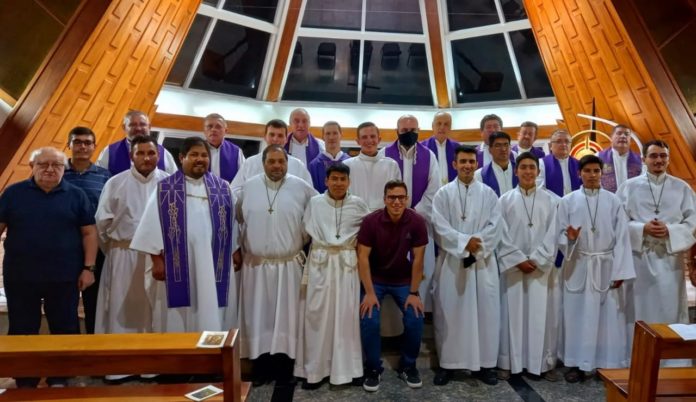 On the first week of March, the Mass was celebrated in the chapel of the Santísimo Redentor Studentate to open the academic year for postulants and professed students who are part of this formation community the city of La Plata. The Eucharistic celebration was presided over by Fr. Javier Machado C.Ss.R. and concelebrated by priests from the Vice-Province of Resistencia and the Province of Buenos Aires. Also present were the formators, among them Bro. Daniel Aquino C.Ss.R., as well as Fr. Enrique López C.Ss.R. from the Province of Asunción.

This year, six new aspirants were admitted to the postulancy. Four of them belong to the Vice-Province of Resistencia and two to the Province of Buenos Aires.

The three postulants from the Vice-Province who were admitted in previous years and three professed religious from the Province of Buenos Aires also belong to this formation community. The community is made up of twelve young men who will study philosophy and theology at the major seminary of La Plata.

The formation of this community is a sign of the sure steps that the units of Resistencia and Buenos Aires are taking towards the unification of both.

Fr. Jorge Cardozo C.Ss.R., responsible for vocations ministry, asked that the commitment to pray for each one of those who live in this formation community continue to grow, asking God to confirm them in their vocation, as well as to continue with the commitment to collaborate in the formation of future Redemptorists.