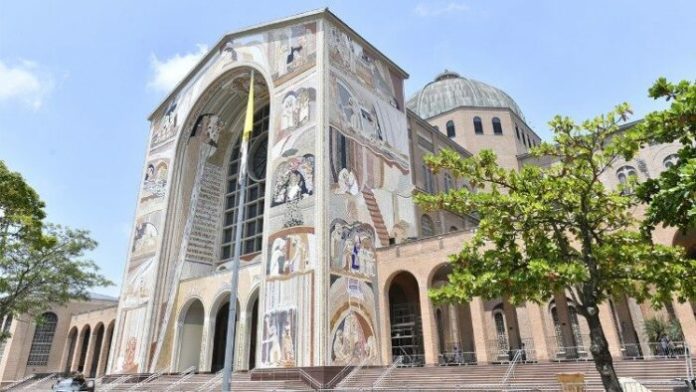 The work, which tells the story of Joseph in Egypt and of Moses, is made in mosaic by artists from different countries.

The National Shrine of Our Lady of Aparecida and the Redemptorist Missionaries of the Province of São Paulo, in Brazil, deliver, on Saturday, March 19, the work of the North Façade of the Basilica of Aparecida, located in the interior of the state of São Paulo. The ceremony will begin with the celebration of a solemn mass at 18h at the Central Altar, followed by a musical presentation at 19h30 in the North Garden of the religious complex. Inspired by the book of Exodus, the work is the first of four façades that will be covered with mosaics featuring biblical scenes.

“On the feast of St. Joseph, the husband of the Virgin Mary, we wish to hand over to the devotees of Our Lady the first stage of this great work. We have taken the first step, but there are still three more stages of this work”, says the rector of the National Shrine, Father Eduardo Catalfo, C.Ss.R.

To celebrate the moment, the singers Ziza Fernandes and Adriana Arydes and the singer Diego Tiguéz will perform in front of the North Facade of the Basilica. They will be accompanied by the orchestra composed by musicians of the PEMSA (Project of Musical Education of the Sanctuary of Aparecida), directed by the maestro Rodrigo Costa.

The musical moment, which has two songs specially made for the date, will tell the story of the liberation of the Hebrew people from Egypt and the action of God in the life of the faithful, themes present in the mosaic that will be inaugurated during the presentation. The idea is to translate the art on the walls using music, dance and scenography.

“We have to contemplate. Read the Exodus on the North Facade of the Shrine, interpret images, colours and art that reveals to us that God cares for us, comes to meet us, gives us freedom and walks with us. He wants to be a Father for us and wants us to be his people, in a covenant of love”, says the administrator of the Shrine, Father Luiz Claudio Alves de Macedo.

Both the Eucharistic celebration and the artistic presentation will be transmitted live on TV Aparecida. It will also be possible to follow the festivity through the social networks of the National Shrine (Facebook and Youtube), through the platform Aparecida Ao Vivo, available at www.a12.com/aparecidaoavivo, and through the application Aparecida. On the occasion of the presentation, the Facebook of the Family of the Devotees will make a special live transmission, with details of the North Façade and the commemorations of the day.

North Facade – With more than 50 meters high, the North Facade was the first to be built in the National Shrine in 1955. In 2019, the Redemptorist Missionaries began work on the cladding of the building, with the direct involvement of 177 professionals. Among them, there were 27 Mosaicists of different nationalities linked to the Aletti Centre in Rome, Italy.

The artistic conception is by Father Marko Ivan Rupnik, a Slovenian priest who has been living and working at the Aletti Spiritual Art Centre since 1991. He has more than 200 mosaic works on five continents.

“His work began at the invitation of Pope John Paul II for the mosaic of the Cappella Redemptoris Mater in the Vatican, inaugurated in 1999. He also has his works in important Marian shrines: of Fatima, in Portugal; Lourdes, in France; and in the Church of San Pio de Pietrelcina, in San Giovanni Rotondo, Italy. In Brazil, we have the mosaics in the Cathedral of Santa Maria, Mother of God, in the city of Castanhal, in Pará”, details the doctor in the science of religion, Wilma Tommaso.

The work in Aparecida promises to be the largest work carried out by the priest and the Aletti Centre so far. Four thousand square metres of mosaics have been applied to the north façade of the Basilica alone.

The pieces are composed of stones from different places, including Brazil, France, Greece, Afghanistan, etc. Some stones are natural, such as marble and granite. But there are also pieces of Venetian Mosaic produced by hand.

After the North Facade, the other three facades of the Basilica will also be covered with biblical scenes. The South façade of the church is currently being prepared to receive the mosaics, which are being made in Rome by the artists of the Aletti Centre.

The covering is by donations made by faithful members of the Familia dos Devotos. The initiative gathers people from Brazil and abroad who support the National Shrine of Aparecida and help in the reception, construction, and evangelisation.