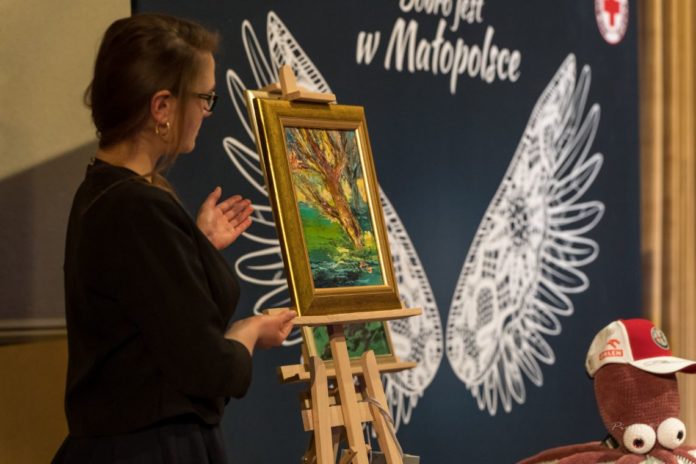 (Tuchów, Poland) At the Marian Sanctuary in Tuchów, on 26 March 2022, the “Bid the Hope!” event took place. It was part of a series of various charity activities organized to build a centre for the charges of the “Hope” Association of Parents and Friends of Disabled Persons.

At 16:00, after the greetings, the concert of the “Skrzypki” music band from Bobowa started. They performed great hits by Polish and foreign authors, winning the guests’ hearts. Then, an auction of several valuable items took place, including an amber necklace donated by the First Lady of the Republic of Poland, Ms Agata Kornhauser-Duda, a week’s holiday for four persons in an exclusive tourist house in Kashubia, and the painting “Christ the Redeemer” by Mr Adam Piekarski from Rome.

The event was full of emotions and many twists of action. The most exciting was the auction of the painting of the Redeemer – the work was finally auctioned off for 8.000 zloty by the Vicar Provincial of the Warsaw Province, Father Dariusz Paszyński CSsR. This unique image will be placed in the “House of Hope” chapel, which is still under construction. Obtaining such a high amount of money was also possible thanks to the generosity of the Redemptorist Seminary and anonymous donors.

Afterwards, there was a break, during which the gathered guests could refresh themselves with meals prepared by the Bistro “Smaczny-Kęs” from Zabłęże and buy various valuable paintings exhibited in the foyer of the Cultural Centre.

At 7 p.m. a performance by the theatre group “Mumio” from Katowice took place. Their programme, which was the focal point of the whole event, allowed the audience to look at the world humorously and made many people laugh. After a series of skits, the artists smoothly moved on to leading the auction of several more items, including one that was eventually sold for one thousand zlotys.

At the end, the President of the “Hope” Association, Mr Marian Gut, thanked all the people and institutions thanks to whom the “Bid Hope! The guests from different parts of Poland left the Cultural Centre in Tuchow in good spirits, able to say, according to the words of Pope Francis, that “today they made a gesture of love towards the other”.

In the end, 36.590 zloty [ca. 8.700 USD] was collected. The construction of the “House of Hope” is still short of about 150 thousand zloty. The Association continues to hold online auctions of various valuable items in a Facebook group called “Bid for Hope”. The Association is also organizing other events, such as a charity concert by the Servi Domini Cantores vocal group, consisting of priest-vocalists, graduates of the vocal-acting departments of Polish music academies, which will take place on the square next to the Basilica of the Visitation of the Blessed Virgin Mary in Tuchow on the evening of 3 May.

The whole project has been organized by the Association “Hope”, the Redemptorist Fellowship and the House of Culture in Tuchow. Honorary patronage was taken by the Marshal of Małopolska Province, Mr Witold Kozłowski (who was also the main partner of the action) and the Superior of the Warsaw Province of the Redemptorists, Father Janusz Sok CSsR. We were also supported by the Mayor of Tuchów, Ms Magdalena Marszałek. Media patronage was taken by: “Kurier Tuchowski” daily, RDN Małopolska and STARnova web TV, which conducted the online broadcast.

On 2 April, in the Shrine of Tuchow, a solemn Eucharist will be celebrated for all donors and benefactors of “Bid the Hope!” The members of the Association also remember all their donors during the monthly Holy Masses celebrated in front of the miraculous painting of Our Lady of Tuchow. We thank you from the heart for every gesture of love!