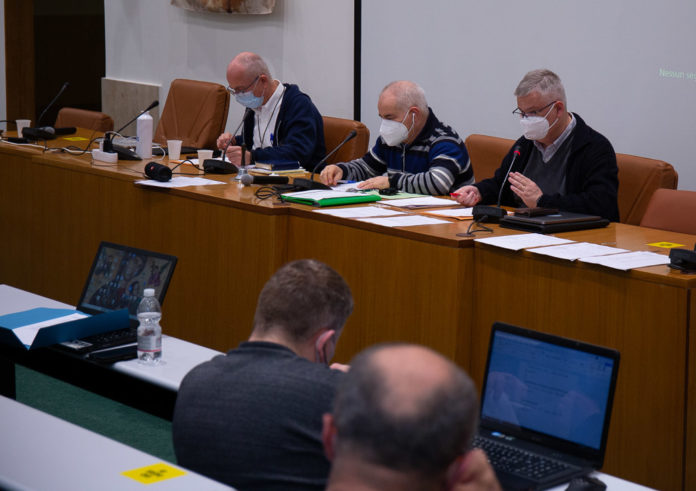 Rome, the Eternal City, was the meeting place for Phase I of the 26th General Chapter of the Conference of Redemptorists in Europe. This phase took place in the Passionist retreat house from 21 to 31 March, next to the Roman Colosseum. Michael Brehl, Superior General, together with three General Councillors, the Coordinator of the Conference of Europe and the representatives of the units of Europe, except the confreres of Ukraine. The capitulars worked hard during these days, with two sessions in the morning and the afternoon, combining presentations, working groups and plenary sessions. Sunday 27 March was the only day of rest for the 43 participants. In the various celebrations, we constantly remembered our Redemptorist confreres in Ukraine and all those helping the victims of the war there.

During the first week, the capitulars worked on issues related to the Congregation as a whole. Presentations were given, and reports were studied, which were enriched by the participants’ dialogue. The second week aimed to concretise the evaluation of the situation of the Redemptorist life and mission in Europe and to plan the future in different areas such as mission, formation, shared mission and leadership.

Redemptorists in Europe face a number of challenges in their mission in the service of the proclamation of the Gospel. The Redemptorist charism is always a joyful response to the call of Jesus the Redeemer to evangelise the poor, especially the most abandoned. The peripheries of the big cities, the presence of migrants and refugees, the new family and social structures are, among others, points of study that all the countries of the Old Continent have in mind. To serve the world and the Church better, the Redemptorist communities want to strengthen their community life, their spirituality and their leadership, and to this end, they have identified several apostolic priorities. In addition, the formation of young Redemptorists will have to consider a greater availability for mission in other countries, languages and cultures.

The Redemptorists in Europe are in the process of conversion and restructuring, as is the whole Congregation of the Most Holy Redeemer. It is a process that started 30 years ago, but it requires care, effort, patience and trust in the Lord who guides our steps. One of the challenges for the future is the creation of three large units in Europe, uniting in new structures the confreres in the south, north and east of the continent. In addition to this joining of forces and hearts, new objectives have also been proposed, such as creating international communities or strengthening solidarity with weaker units. In these challenging times, another decision was to strengthen solidarity with Ukraine and the confreres who work there and in other countries in the service of refugees.

Fr. General concluded Phase I of the 26th General Chapter in Europe, thanking everyone for their collaboration, including the people organising the meetings and themes, the technical service, the notaries and the translators. All that remains now is to gather the fruits to enrich the second phase of the Chapter, in which all the Redemptorists of the world are united as a prophecy of ‘a new heaven and a new earth’.