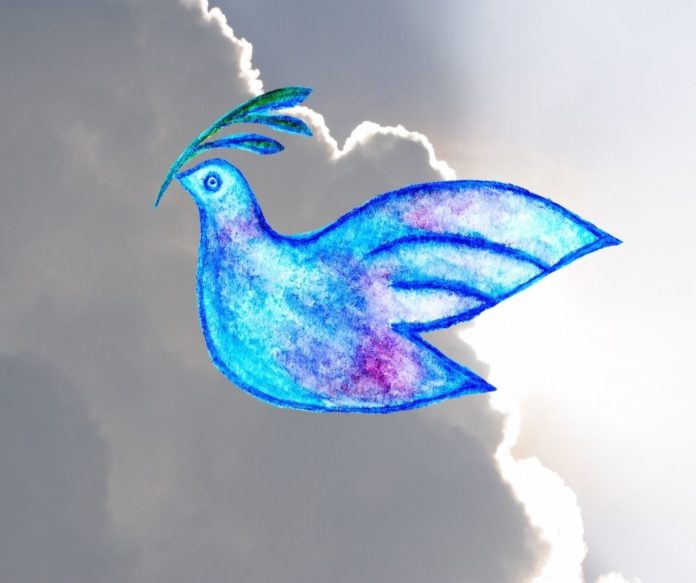 “Blessed are the peacemakers, for they shall be called children of God” (Mt 5:9)

Northern Ireland in the 21st century is a blessedly different place than it was in the century that preceded it. I think of my own childhood, devoid of the bomb and the bullet, and the shocking stories told by my relatives, growing up during the 70s and 80s, stories about shootings, burning cars and harassment.

The Good Friday Agreement heralded a new dawn for Northern Ireland, leading us towards the path of peace, bringing an end to the Troubles. There were many key people involved in the creation of the Agreement, but one figure that particularly stands out to me is Fr Alec Reid, a Redemptorist priest of Clonard in Belfast.

Fr Reid did not claim allegiance to any political party or ideology. Instead, he explained what motivated him: „I used to say that I don’t belong to any political party, but I represent the next person who is going to be killed in the Troubles. The church has a moral obligation to get stuck in when people are suffering and to try and stop it.”

Not only was this a viewpoint that was all too rare during the bloody days of the Troubles, but it also exemplifies the teachings of the Catholic Church: we are all part of one human family, regardless of our racial, ethnic, economic or ideological differences.

Perhaps one of the most haunting images of the conflict depicts Fr Reid, who knelt over the body of a British soldier. In what became known as the corporal killings, two British soldiers who accidentally drove into a republican funeral were beaten and shot by the IRA. Fr Reid was warned to stay away by the assailants, and even threatened with death, but courageously went to help the soldiers.

When nothing could be done for them, he performed the last rites. This simple act of human decency evokes another teaching of the Catholic Church: everyone has a fundamental right to life, and we each have a responsibility to do what we can to uphold that.

What was not known at the time Fr Reid’s picture was taken is that he was carrying with him a bloodstained envelope from Gerry Adams, to be given to John Hume, leader of the SDLP. Fr Reid was instrumental in bringing Sinn Féin into the political dialogue, a process that would eventually culminate in the 1994 IRA ceasefire. These talks helped to change Sinn Féin’s policy, moving away from the armed struggle against Britain towards a focus on self-determination and achieving their aims through non-violent, political means.

Following the success of the talks, Gerry Adams acknowledged that peace would not have been possible without the efforts of Fr Reid: “there would not be a peace process at this time without [Fr Reid’s] diligent doggedness and his refusal to give up.”

The negotiations set up by Fr Reid paved the way for the Good Friday Agreement, and he acted as Sinn Féin’s contact person with the Irish government from 1987 to the signing of the Agreement in 1998.

The conversations between Hume and Adams were held secretly in rooms in Clonard Monastery. It was a fitting location for the negotiations to take place; the monastery had been a centre of peacemaking and reconciliation and had strong links with the local Presbyterian church.

The Hume-Adams talks were not the only important discussions to take place at Clonard; other interfaith talks held at the monastery also played a vital role in brokering the 1994 ceasefire. Pope Paul IV taught “if you want peace, work for justice.” Fr Reid worked for both, creating an atmosphere where people of all religions and beliefs could come together and try to build a better future.

Fr Reid’s contribution to the peace process in Northern Ireland did not end with the signing of the Good Friday Agreement. In 2005, he was one of the witnesses to the decommissioning of IRA weapons, a critical hurdle in the peace process. Everyone recognised how difficult the struggle for peace had been, and it was essential to preserve it, however fragile it was. 2 Corinthians 5:17 reads, “Therefore, if anyone is in Christ, the new creation has come: the old has gone, the new is here.”

The bad old days of the Troubles had gone, but the new, peaceful creation birthed by the Agreement would have to be nurtured. Fr Reid’s presence, along with Methodist minister Harold Good, was vital, as the was a trusted figure and a known peacemaker and helped to assuage the fears of those sceptical about the republicans’ intentions.

Fr Reid was far from the only person involved in bringing peace to Northern Ireland. What stands out to me about him is that, unlike some of the other architects of peace, he was wholly unmotivated by a desire for constitutional change or his own political beliefs. Instead, he simply valued the sanctity of human life, and wished to see an end to the atrocities that stole so many innocent lives.

Journalist Brian Rowan summed up the impact that Fr Reid had on the Northern Ireland peace process in the BBC documentary 14 Days: “I think when the journalists look back on the 30 years of conflict here, and on the journey of war to peace, the story will not be told without the name of Alec Reid right in the middle of it all.”