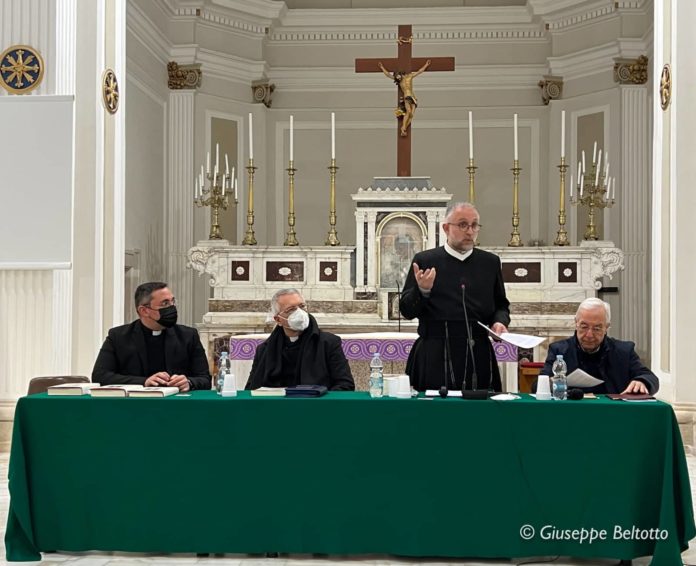 On March 23, in Trinitapoli (BR, Italy), the correspondence of the Servant of God Father Giuseppe Maria Leone, Redemptorist, was presented. The affection and interest in the figure and work of Father Leone led his fellow citizens to flock in large numbers to the Shrine-Parish of the Blessed Virgin Mary of Loreto, where they followed in religious silence the cultural event promoted by the Father Leone Study Centre. Present were Monsignor Leonardo D’Ascenzo, archbishop of Trani-Barletta-Bisceglie, Dr Emanuele Losapio, mayor of Trinitapoli and Don Mario Porro, one of the two curators of the work.

Prof. Pietro di Biase, an authoritative local historian, who coordinated the evening, at the beginning of the presentation, recalled some stages of the process for the Cause of Beatification of the Servant of God and the many initiatives held in the country from December 17, 1983, when there was the translation of the remains of the Liguorian Father from Pompeii to Trinitapoli, to May 31, 2021, when the Positio was presented at the Congregation for the Causes of Saints.

This was followed by a talk by Father Vincenzo La Mendola, a Redemptorist and a member of the Historical Institute of the Congregation, who was specially invited. In his detailed presentation of the Carteggio, he emphasised the scientific methodology followed by the authors, as evidenced by the rich critical apparatus accompanying the volumes, and their patient perusal of ecclesiastical archives, highlighting the work of research, editing and printing of the work. He then underlined the preciousness of the collected documents, useful to “rewrite” the biography of the Servant of God, starting from his daily life and ministry in the various cities, dioceses, monasteries and religious institutes, which had good fortune to know the holiness of Fr. The speaker also dwelt on the importance of the Carteggio in the panorama of 19th century Redemptorist historiography and its relevance as a first-hand historical source, indispensable for the knowledge of the personality of the Servant of God, his spirituality and the impact of his work in the life of the Church. Father Leone – so began La Mendola – is a key figure for understanding a segment of nineteenth-century history that has its fulcrum in the event of the Suppression of Religious Orders and the subsequent reorganisation of religious life, with all the implications, at various levels, that emerged from the correspondence. The work of the Trinitapolitan Redemptorist is a privileged perspective from which to observe and analyse larger events that marked an era of transformation.

We felt particularly moved when Prof. di Biase read the letter that Father Leone wrote on July 17 1867 to one of his penitents, in which he recounted the miracle of the liberation of cholera through the intercession of Our Lady of the Sacred Heart, whose miraculous image, kept in the Church of St Joseph, was displayed in the Sanctuary for the occasion. The Liguorian Father, according to him, went so far as to argue with Our Lady, asking her to put an end to the epidemic or else to let him die. I am truly grateful to the Lord and to the Blessed Virgin because once again, they have made the holiness of one of their sons shine forth, inviting us to walk towards that holiness that Fr Leo traced out and witnessed.

The Archbishop also said that if the Lord makes saints, it is up to us to “make ourselves holy” also through the example of Father Leo, as can be seen from his letters.

In his speech, the mayor recalled that he had willingly sponsored the edition of the Carteggio, aimed at highlighting, even more, the figure of a son of this land, whom he began to know as a boy thanks to his participation in a literary competition on the subject.

At the end of the event, the parish priest Fr Peppino Pavone recited the prayer for Father Leone’s beatification before the painting of Our Lady of the Sacred Heart. Stefano Sarcina, vice-postulator, expressed his final thanks, hoping that the mother church, where the relics of the Servant of God rest, would be reopened so that the faithful could resume their pilgrimage and prayer.

The cultural event represents a significant step in the process of knowledge and deepening of Fr Leone and a further incentive to invoke his intercession, imitate his virtuous life and pray for his beatification, which has been hoped for a century by the community of Trinitapole, the Redemptorists and all those who are inspired by the holiness of the Apulian redemptorist.