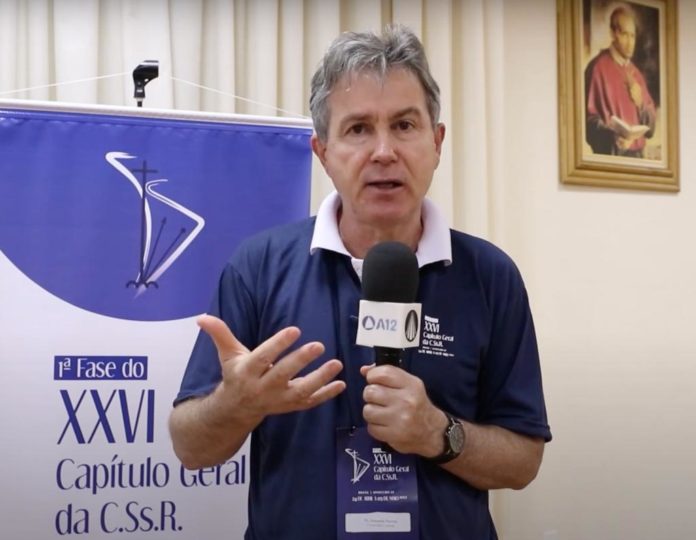 Joaquim Parron, C.Ss.R., Redemptorist Missionary of the Province of Campo Grande and a member of the Central Commission of the XXVI General Chapter, clarifies relevant aspects of this great event of the Congregation of the Most Holy Redeemer and emphasizes the importance of personal and community conversion for the revitalization of the Mission in the five continents where Redemptorists are present.

How did you receive the nomination by the Redemptorist General Government to serve on the Central Preparatory Commission for the XXVI General Chapter?

First of all, I thank you for the invitation to converse with the readers of the Akikolá! I am a reader of this magazine and greatly appreciate its articles. It was a joy to receive the nomination of the General Government to compose the Central Preparatory Commission for the XXVI General Chapter. I have already assisted in other General Chapters and was also the moderator of the most recent Chapter. In fact, this appointment is for service, and we have had a lot of work in this initial process.

What are the responsibilities of this Commission?

The Central Commission has the responsibility of preparing the process and also the inputs for the General Chapter. It is a very demanding work because we try to involve the participation of the Councils of all the Provincial Units, as well as, in a second moment, we try to integrate the suggestions of all the confreres spread in the 81 countries where our Congregation is working. From these suggestions, we have elaborated the Working Document, which is the central aid for reflection at the Chapter. This commission also has the mission of accompanying the whole Chapter process.

In general lines, what is the function of the Redemptorist General Chapter?

I can answer by quoting Numbers 107 and 108 of the Redemptorist Constitutions: “It is the function of the General Chapter to care for the apostolic life of the entire Institute, to strengthen the links that bind its individual parts together… In order to carry out so serious a task adequately, the general chapter will subject the whole Congregation to a careful examination, to discover if it remains faithful to its own proper mission, in accordance with the spirit of the founder and its sound traditions. It will also examine whether the Congregation is giving willing attention to the voice of God who is ever challenging it through the Church and the world”. Thus, the General Chapter will review our apostolic life and draw lines to strengthen our mission in this wounded world.

How is the preparation for the canonical phase of the XXVI General Chapter, which will be held in Rome?

We have already had the first phase of the Chapter in the Conference of Africa and also in Europe. Recently, it took place in Latin America and the Caribbean, in Aparecida (SP), from April 24th to May 3rd. Having gone through the first phase in the five Conferences (this is how the Congregation is currently organized), we are going to prepare the aids for the canonical phase, which will be in Rome. So, the preparation for the canonical phase is already well advanced, and we are going to gather concrete proposals to be forwarded to this second phase of the General Chapter.

Why is the General Chapter divided into phases, and what happens in each one of them?

This will be the second General Chapter in three phases. The first phase is carried out in the Conferences themselves (Latin America-Caribbean, North America, Europe, Africa-Madagascar and Asia-Oceania). The second phase, also known as the canonical phase, which will be held in Rome, Italy, receives the proposals from the Conferences and carries out their discernment. The approved proposals will be forwarded to the third phase – which is the implementation phase – which again takes place in the Conferences. We do the General Chapter in three phases to better receive the suggestions of the confreres, having more participation and communion. Discernment becomes easier when there is greater participation, including that of the laity.

Which are the principal themes that will be discussed during the XXVI General Chapter?

The central theme is to revitalize the mission, that is, to seek the ardor and the spirit of our founder, Saint Alphonsus, and also the healthy Redemptorist tradition. In that context, we will look at how we witness to the Most Holy Redeemer in this wounded world. One theme that will be very strong is the dimension of conversion. As our Constitutions (n.11) say, “Redemptorists are “apostles of conversion”, in so far as the chief object of their preaching is to lead people to a radical choice regarding their life – a decision for Christ – and draw them firmly and gently to a continuing and total conversion.” Through personal and community conversion, we can revitalize the Redemptorist mission on the five continents, highlighting our vocation to proclaim the saving Word to the poor and abandoned.

How do you see the process of restructuring of the Congregation in the context of missionary evangelization in the face of the many challenges that the Church faces in this wounded world?

Restructuring in the Congregation is a call for personal and community conversion. Structures must serve the mission, and if some structures no longer respond to the challenges of evangelisation in the world, we have to rethink them. Thus, restructuring comes as a response to the mission. Our identity as Redemptorists does not change, but we must think of new forms of missionary action. We can recall the motto of St. Clement: “To proclaim the Gospel in an ever new way”. In this comes creativity in mission and fidelity to our charism.