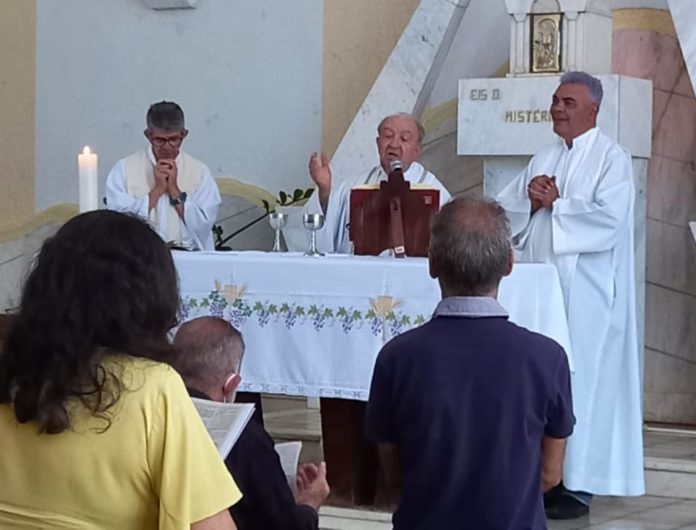 On 29, 30 April and 1 May 2022, resuming face-to-face activities after the world pandemic, the III ERESER (Regional Meeting of Former Redemptorist Seminarians) was held in SACRAMENTO, with the theme “Being Redemptorist Today”. The event was held at Chácara Recanto Feliz, in the city of Sacramento-MG, with the participation of former seminarians and their families, priests, Oblates and collaborators. Fathers José Marques Dias, Spiritual Director of UNESER (National Union of Former Redemptorist Seminarians), Antônio Desidério Frabeti and Gilmar Pinheiro Machado, from the Diocese of Divinópolis-MG, who was a Redemptorist, accompanied all the activities carried out during those days. The organising team of the event, formed by Sebastião Paim (Social Director of UNESER), Vicente de Paula Alves, Vânia Beatriz Manzan, Luciano Guarato Neves and Rosangela Aparecida Nogueira, was in charge of the preparation, allocation of spaces, invitation of people and elaboration of the programme. This commission counted on the collaboration of several people to manage the logistics of accommodation and food, the liturgy, and the recreational animation developed by José Carlos and Sueli Leite, whom we thank.

The arriving participants were received and welcomed from 4 p.m. on Friday, April 29. Then they listened to the official speakers: the President of UNESER and the Spiritual Director, and with the Moment of Mercy, by Father Gilmar Pinheiro Machado, recalling the Alphonsian Redemptorist mysticism. On Saturday there were activities of reflection on the central theme “Being Redemptorist Today” developed by the Director of UNESER Vicente de Paulo Zica, the Eucharistic celebration, a tour of the facilities of the Seminary Santíssimo Redentor and the delicious barbecue, enlivened with music and bingo in the festive moment.

We received several messages from those who could not attend this meeting, regretting their absence, sending greetings to the participants and wishing them success in their aims and objectives. Fundamentally, UNESER proposes in these Regional Meetings and the National Meeting to bring together ex-seminarians and their families, to fraternise and relive the time of living together, to share life experiences, to reflect on spirituality and Alphonsian mysticism, as well as to discover and experiment forms of experience of abundant redemption in the wounded world, especially with the attention to the most fragile and abandoned people.

In this sense, the messages sent to the III ERESER SACRAMENTO by the Superior General of the Congregation of the Most Holy Redeemer, Father Michael Brehl, and by Father Marlos Aurélio da Silva, Provincial of São Paulo, encourage us to participate in Redemptorist missionary action, to indicate our concern for the most abandoned and excluded, and to reaffirm the mercy necessary for the wounded world. We record here our gratitude for the affection and appreciation of UNESER on the part of the Superior General and the local Provincial.

On Sunday, the first day of May, after breakfast, the farewell rite took place, with speeches by the Organising Committee, Father José Marqués and the President of UNESER: “What do I take away from this III ERESER SACRAMENTO? This moment responds to the proposed challenge: “Within the Redemptorist mysticism, how to be a participant in the copious redemption in this wounded world?” Alongside missionary action, and just as or even more important, it is worth highlighting the value of the witness of life, in the world of work, in social relations in the communities where we live, as Father Michael Brehl reminded us.