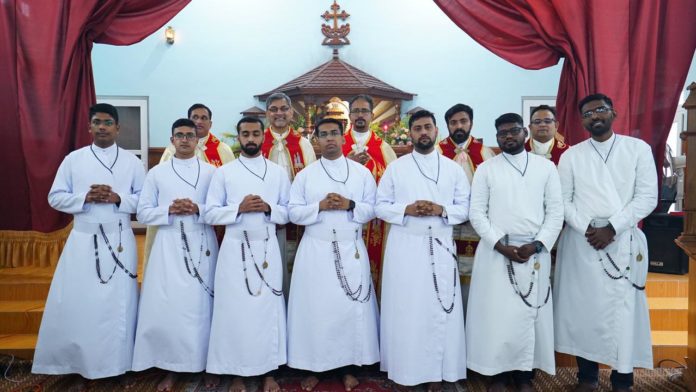 A historic moment: the Province of Liguori and the Vice-Province of Majella celebrate together 7 Final Professions in the Syro Malabar Liturgy

The 24th of May 2022 will go down as a historic moment in the life of the Redemptorists of India. Seven Redemptorist Students, five from the Province of Liguori in Kerala in India and two from the V Province of Majella in Mumbai, India, professed their Final Vows at St. Clement’s Renewal Centre in Vadavathoor Kerala.

The service was during the Syro Malabar Holy Qurbana (Holy Sacrifice of the Mass) in Malayalam of the Syro Malabar liturgy, while the rite of the profession itself was in English after the Gospel along with the Homily in English.

Fr Biju M (Provincial of Liguori) presided over the celebration of the Holyt Qurbana in Malayalam, and Fr Ivel Mendanha (V Provincial of Majella) concelebrated and presided over the Rite of Final Profession. Fr Biju accepted the vows of the five students from the Liguori Province (Thomas, Shibin, Albin, Anthony and Jibin), and Fr Ivel accepted the vows of the two students from the Majella V. Province (Thomas K and Vivek Colaco).

For the very first time in the history of the Redemptorists in India, such a service was held in Vadavathoor in Kerala, where the Liguori Province hosted the Final Profession Service along with a Latin Unit of the Congregation (the Majella V. Province). Fr. Paulose, the Vicar Provincial, noted this historic moment in his welcome message to the gathering of confreres from both Liguori and Majella and the families of the students.

Fr Ivel, in his homily, noted that what brings Redemptorists together despite the differences in Rites (Syro Malabar and Latin), languages (Malayalam and Konkani), cultures (Kerala and Mumbai), is the Spirit of the Lord Jesus Our Redeemer and His Mission of proclaiming Plentiful Redemption to the Most abandoned especially the poor. We are One Body as Redemptorists despite our differences of Units and rites, languages and cultures.

The seven students study at Mt. St. Alphonsus, the Common Theologate of the 3 Units of India in Bangalore.  They had a month of preparation for Final Vows, which was held at Vadavathoor in Kerala under the guidance of Fr Tomy of the Province of Liguori and Fr Poly, the Formation Secretary of the Province, along with confreres from Bangalore, Liguori and Majella who provided the inputs. They now will enter into their final few months of preparation for Ordination as Deacons and then Ordination as Priests.

The group has one more student from the V. Province of Majella, Sebastian K, who unfortunately took very seriously ill on the very first day of the course and was admitted to the hospital. However, with the grace of the Lord and the prayers of so many and the excellent medical staff of Caritas hospital, he has slowly begun to heal, and we all look forward to the day he will make his final vows.

We give thanks to the Lord for the fraternal sharing of the two units of Liguori and Majella bound together, despite the diversity into the One Missionary Body of the Congregation, a fact celebrated with joy and gratitude at the Final Professions of the seven young Redemptorist Students from the 2 Units on the 24th May 2022 at Vadavathoor in Kerala in the Province of Liguori.