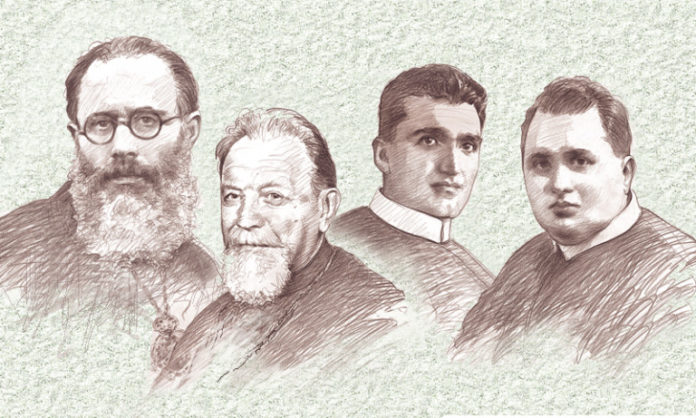 On 28 June we remember the great sacrifice of the Ukrainian Redemptorists for their witness to the faith. May their martyrdom bear the fruits of love, hope and peace, especially in Ukraine, which is currently suffering from Russian aggression.

In September 1939 (Molotov-Ribbentropp pact), the Soviet Union united Western Ukraine to its own territory, unleashing violent persecution against the Greek-Catholic Church. Until the fall of communism in 1989, the Bolsheviks imprisoned in camps, tortured and killed thousands of faithful, bishops, priests and lay people. Among those martyred were the Redemptorists Nicholas Charnetsky (1884-1959), bishop, apostolic exarch of Volyn and Pidliasia, who died outside the prison, under the strict control of the police, after his health had been ruined during ten years of imprisonment in the camps, Basil Velychkovsky (1903-1973), bishop of the “clandestine” Ukrainian Greek Catholic Church, who died in Canada as a result of torture during many years of imprisonment, after being expelled from the country in a precarious physical and psychological condition; Zenon Kovalyk (1903-1941), a priest, violently killed, according to some witnesses, by being crucified on the wall of a corridor in Brihidchy prison; Ivan Ziatyk (1899-1952), a priest, who died in prison after a violent beating. John Paul II beatified them in Lviv on 27 June 2001.

Glorious and ever living God,
you brought salvation to humanity through the Cross of Christ. By the merits and intercession of the blessed bishop Nicholas, and his companion martyrs, Vasyl, Zenon, and Ivan,
grant that, in difficult times we may be steadfast in the faith and enjoy eternal happiness in their company.
We ask this through our Lord Jesus Christ, your Son,
who lives and reigns with you
in the unity of the Holy Spirit,
one God for ever and ever. Amen