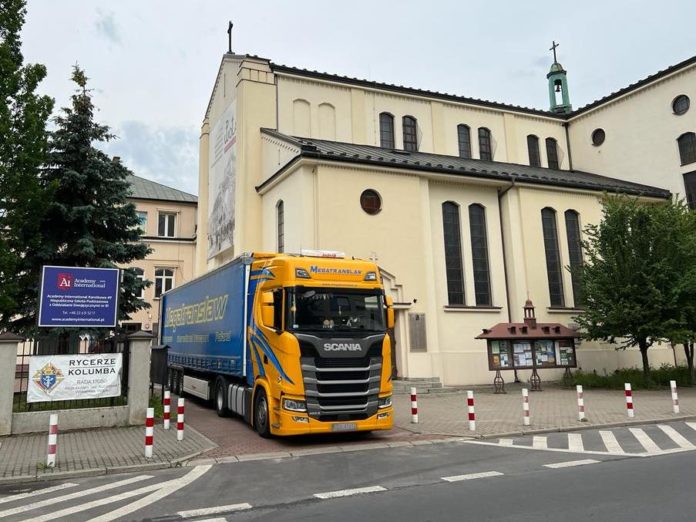 For 15 days, the campaign SHARING WITH UKRAINE has been carried out in the parish of the Most Holy Redeemer in Madrid. The result has been loading a lorry with more than 24.000Kg of non-perishable food.

On Tuesday, June 7, 32 pallets of food for Ukraine via Poland were loaded in Humanes de Madrid. Mostly beans, rice, flour, spaghetti, macaroni… about 150 bags of various foodstuffs and more than a hundred pieces of cloth together with some knitted clothes for newborns. The truck arrived in Warsaw on Monday, June 13, and was unloaded by hand.

The parish Caritas, many parishioners of the parish and the Asociación Acoger y Compartir (Welcome and Share Association) collaborated in making the shipment possible. The destination was the Redemptorist parish of St. Clement in Warsaw. On 6 August 1944, 30 Redemptorists and more than 6,000 Poles from the area were murdered in this martyred place. The neighbourhood was razed to the ground. A large photo on the façade of the church commemorates the massacre. The virus of evil has reawakened with the same or even greater destructive urges. It is clear “that we must do something in this responsible fight against evil… without falling into the error of believing that ethics can suffice against evil” (A. Gesché).

The cargo deposited in this parish of St. Clement is already being distributed to the communities that are welcoming Ukrainians: Tuchów, Glogów, Lublin, Zamosc, Kraków, Wroclaw … and a Redemptorist who, with a group of ambulances, welcomes and helps on the border with Ukraine and beyond.

We visited the three places of reception in Warsaw: the central station, the bus station and the Expo, which acts as a shuttle to the various countries of Europe. At the Expo, we found a sizeable glassed-in hall that we could not enter despite wearing the Redemptorist habit. There were those who nobody wants, those who have nowhere to go. It is the place of swallowed tears, where one suffers in silence.

José, a Spaniard married to a Pole, tells us about the three waves of the arrival of the Ukrainians: those with high purchasing power who saw the problem coming and went ahead by renting or buying houses to which the family came while they were still in Ukraine. In a second wave came those who have acquaintances, friends or relatives in other Polish cities or in Warsaw. In the third wave came and are coming, those who have nothing and come with nothing but the push of the horror and panic of the war.

It must be said that the Polish government is doing very well. More than four million refugees have passed through its borders. Some two million have remained in the country. Six hundred thousand of them in Warsaw. All kinds of aid have allowed the reception to work, but the first three months are coming to an end. What will happen now?

I spoke to a Redemptorist who, at the end of the conversation, asked me not to publish his name in any way. I didn’t ask him anything. I have devoted all my attention to listening to him talking about the Redemptorists in Russia, Belarus, and Kazakhstan … And I feel great admiration for the Redemptorist companions who, with such wisdom, know how to be the presence of salvation. In the sanctuary, in the prayer before the relics of St. Clement, when everything seems hopeless, something shows me that God is salvation. When I leave that place and walk back down the street, the person I am with makes me aware that the square is filled with the scent of the lime trees.