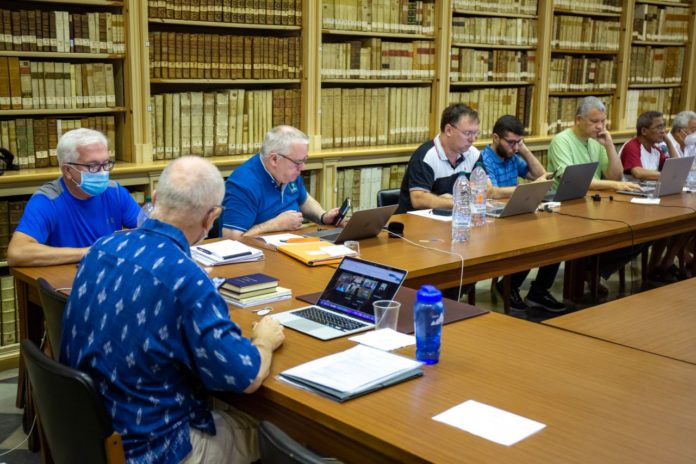 Preparations for this important event began more than two years ago, coordinated by the Central Preparatory Commission, which is currently meeting in Rome from June 28 to July 12.

The work of the Commission is facilitated by Fr Brendan Kelly, C.Ss.R., General Secretary of the Congregation. Before the Commission formally concluded its proceedings, we asked him to comment on a few questions.

Fr Brendan, what is the Commission dealing with at its last meeting before the General Chapter?

It is interesting that you ask what we are doing at this, our last meeting before we celebrate the second Phase of the Chapter! In fact, due to the pandemic, this is actually the first meeting we have had as a Commission where we have actually been together in the same room! Of course, we have had regular meetings but, unfortunately, they have been virtual meetings. While they have been valuable, there is a great advantage in actually sitting down together and discussing matters. And that is what we have been doing in recent days, with the Superior General and his Council and the Coordinators of the Conferences.

Despite the challenges presented by Covid, we have managed to complete all five of the first phase meetings. Each Conference has submitted a report to the Preparatory Commission in relation to the current situation of each Conference and the issues that they believe should be addressed by the second phase of the Chapter. We have been studying very carefully these reports in recent days (and each of us prior to our meeting in Rome) and, with the help of the Spirit, endeavouring to “read the signs of the times” through the lens of these reports and attempting to set an Agenda for Phase II. It has not been easy – we live in a world that is emerging from a pandemic, a world where there is increasing polarization and a world where the Church, and the Congregation, is struggling to discover a role and a contribution as we seek to discover ways to continue the mission of the Redeemer.

Needless to say, we have also been addressing some of the practical matters that need to be resolved in organizing such an event. In September, 90 Capitulars will gather in Rome, along with 5 lay partners and around 15 confreres and lay partners who will assist in the smooth running of the Chapter.

As we finish our meetings these days, I think we have achieved what we set out to achieve – we do have an Agenda and a Program. These do need some refinement, but I think we are getting there!

What was the process of preparation for the General Chapter on a Congregation-wide scale?

Organizing this Chapter has been challenging! Covid played havoc with us! But despite those challenges, I think we managed to achieve much. At the risk of sounding presumptuous, I don’t think any previous General Chapter has engaged in such a process of preparation and consultation. We began with consulting the General Council and the Conference Coordinators. This was followed by a Consultation that involved the Councils of all the Units of the Congregation. We also consulted missiologists and theologians in search of their insights into the current situation of our wounded world.

Based on the responses we received, and with the help of the Office of Communications of the Congregation, we produced a series of four video presentations, addressing the theme of the current sexennium “Witnesses of the Redeemer, in Solidarity for Mission, to a Wounded World”. In producing these videos, we were greatly assisted by confreres and lay partners from the different Conferences of the Congregation.

With the assistance of these videos, we were able to engage with confreres and lay partners throughout the Congregation. The videos were presented and discussed in the vast majority of the communities of our Congregation and their reactions and comments were submitted to the Preparatory Commission.

What objectives did the Commission set for itself in the process of preparing for the General Chapter? Have they been achieved?

I think my response to this question is answered somewhat by my response to the previous question. As a Commission, we set out to undertake a process of consultation in the Congregation that would involve all confreres and lay partners as well as those tasked with the responsibility of leadership. We wanted to get an idea of what confreres and partners are actually experiencing at this time as they undertake the mission of the Congregation. The consultation process would, we hoped, enable us to work towards a Chapter that would respond to the “anxious questionings” so many of us have at this time. I think we have achieved this.

While we recognize weaknesses at the preparatory stage, we do believe we have conducted a process of consultation that has involved the confreres and lay partners as best we can, taking into account the limitations we faced.

We used a phrase in the Working Document that perhaps this Chapter is the most significant Chapter for us since the Second Vatican Council. That statement has been questioned. I accept that. But I still think it remains valid! Back in 2015, Pope Francis stated that “We are not in an era of changes, but in a change of era.”  Those words are more significant today that they were then! The challenges facing us are great. Can we respond? It’s up to us! It’s in our hands!

Fr. Brendan, thank you very much for your comments.