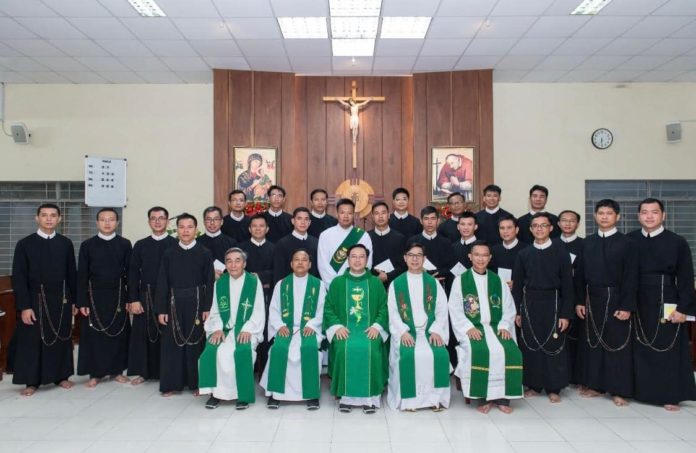 (September 3, 2022) – This morning the opening ceremony of the new school year 2022-2023 and the graduation Awards Ceremony for the 11th batch took place at Saint Alphonsus Theologate of the Redemptorist Province of Vietnam.

The main celebrant of the Mass was the Provincial of Vietnam, Fr Joseph Nguyen Ngoc Bich. Co-celebrating the Mass was Fr Paul Luu Quang Bao Vinh, the ordinary counselor of the Province, together with members of the Theologate’s Board of Directors, superiors of religious congregations, professors, and more than 200 seminarians of 22 different Congregations and Orders studying at the Theologate.At the beginning of the mass, Fr. Anthony Nguyen Van Dung summed up the previous academic year and suggested prayer intentions for the new academic year.

In his homily, Fr Joseph invited students to learn about Jesus in order to know God, love God, and live God’s abundant life. He emphasized that learning is of the utmost importance, through which students delve into sacred mysteries and communicate those mysteries to others accurately.

After the Inauguration Mass for the new academic year, the graduation awards ceremony was held for the students of the 11th bath. The rite of graduation begun with an invocation for the gift of the Holy Spirit. After that, Fr Joseph Do Dinh Tu, the Theologate’s Director, gave a graduation speech to students who were about to graduate. Next, Fr Joseph Nguyen Ngoc Bich, as Chancellor and Rector of Saint Alphonsus Theologate, officially approved and granted diplomas equivalent to Bachelor of Theology to 31 seminarians who had just completed their training programs.

In the joy of graduation, a newly graduated seminarian representing 31 teachers had a speech of gratitude to the Provincial, the members of the Theologate’s Board of Directors, the professors, and the superiors. After the graduation ceremony, Fr Provincial Joseph solemnly announced the opening of the school year 2022-2023.

Finally, as the Theologate’s coordinator, the Prefect of Studies, Fr Anthony had a few words with the students about the orientation for the new academic year. The opening ceremony of the new school year 2022-2023 at Saint Alphonsus Academy ended with the Prayer of Peace being resounded among the large community of attendants.

May God bless our seminarians in their mission of studies.