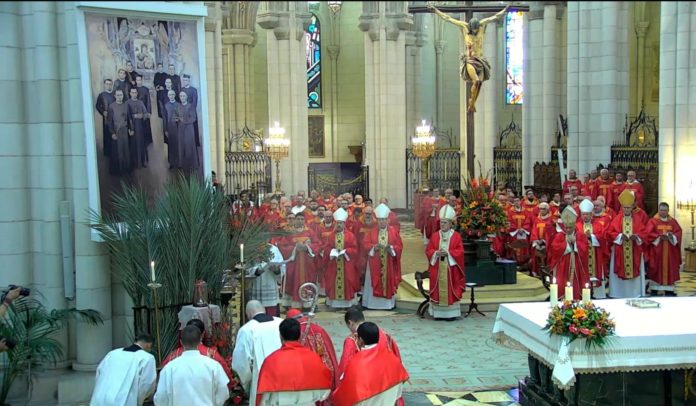 Today, 22 October, in the cathedral of Santa María la Real de la Almudena in Madrid, the beatification of 12 Redemptorists martyrs have taken place. They belonged to the two communities which, at that time, the Congregation of the Most Holy Redeemer had in the capital of Spain (Sanctuary of Perpetual Help in Chamberí, and the Basilica of San Miguel in La Latina), and were martyred in 1936.

The liturgical memory of the new blessed will be celebrated on 6 November, together with the six Redemptorist martyrs of Cuenca, beatified in 2013.

The beatification mass was presided over by Cardinal Marcello Semeraro, Prefect of the Dicastery for the Causes of Saints, the Pope’s delegate to preside over the beatification. Also in attendance were a large number of Redemptorists led by Father Rogério Gomes, Superior General of the Congregation, as well as diocesan priests, religious and lay people. More than 130 relatives of the newly beatified were also present.

The beatification of the twelve Redemptorist martyrs of Madrid offers us “the message of total trust in God. Trust in the Father’s love, trust in the intimacy of Jesus crucified and risen with us’. That which gave strength to Vincent Nicasio Renuncio Toribio and his eleven companions, remembered in the homily by Cardinal Marcello Semeraro.

Read the full text of the homily (Italian)

Yesterday, on Friday evening, a youth prayer vigil was held in the Parish-Sanctuary of Perpetual Help in Madrid (Manuel Silvela, 14); the events will conclude tomorrow, at 12:00 p.m., with a Eucharist in the Parish of Madrid, presided over by the Redemptorist Superior General, Fr. Rogério Gómes, CSsR, and will coincide with World Mission Sunday, which this year is celebrated with the motto “You will be my witnesses”.

The Eucharist of the beatification (in Spanish) can be followed below in a streaming recording from Madrid Cathedral:

Yesterday, Friday evening, a youth prayer vigil was held in the Parish-Shrine of Perpetual Help in Madrid (Manuel Silvela Str, 14); and tomorrow at 12:00 noon will be celebrated a Eucharist there, presided by the Redemptorist Superior General, Fr Rogério Gómes, CSsR. It will coincide with World Mission Sunday, which this year is celebrated under the motto “You will be my witnesses”.

The beatification is the result of the affection with which the sons of St. Alphonsus and their families have kept the memory of their confreres throughout the almost 90 years that have passed and of the work of collecting data that began almost the day after the events that led to the request for the opening of the cause in 2005, beginning the diocesan phase of the process in September 2006 and concluding in November 2007. After an iter of study in the Dicastery for the Causes of Saints by historians, theologians, cardinals and bishops, the Holy Father declared them martyrs on 24 April 2021.

With the celebration, we Redemptorists want to give thanks to God for our charism and vocation and for these 12 religious missionaries – priests and religious brothers – who, besides preaching the Gospel and announcing Christ the Redeemer, lived their vow of perseverance, being faithful to their faith and vocation and announcing the salvation and mercy of God in the midst of persecution and shedding their blood as an expression of generous dedication, love of God and forgiveness and reconciliation for all.