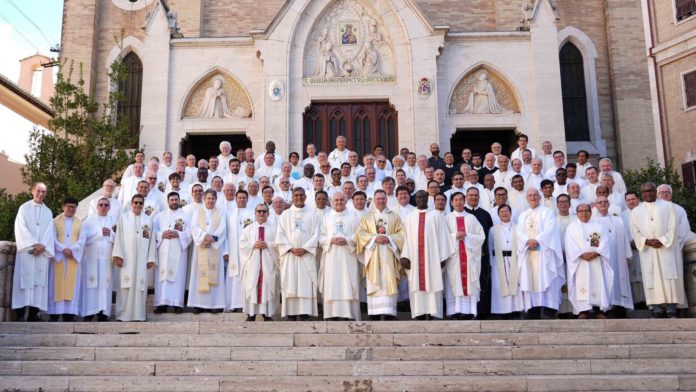 The solemn Mass with the rite of handing out the missionary crosses, presided over by Father Rogério Gomes C.Ss.R., the new Superior General, celebrated in the Shrine of Our Mother of Perpetual Help in Rome on October 6, was the final moment of the XXVI General Chapter, which took place from September 11 to October 6 in Ciampino, near Rome.

The General Chapter welcomed the reports of the past six years from the Superior General and the Bursar and listened to the reports of the Conference Coordinators representing all the Provinces, Vice-Provinces and Missions of the respective continents. The Capitulars discussed the current situation of the Redemptorist Congregation in the world and analysed the essential elements of its identity and mission.

With the newly elected General Government, the Capitulars met Pope Francis at a private audience on October 1. On the following day, they made a pilgrimage to Pagani, near Naples, to celebrate Eucharist and pray at the tomb of St. Alphonsus de’ Liguori, the Founder of the Congregation of the Most Holy Redeemer.

During the last week of its deliberations, the Chapter considered the postulates submitted and took a number of decisions that will be published soon in the Final Document of the General Chapter, together with a Message addressed to the whole Redemptorist Congregation, Redemptorist Nuns and Lay Partners in mission.

The Capitulars also chose the theme for the new sexennium: “Missionaries of Hope in the Footsteps of the Redeemer”. This theme reflects the spirit of the discussions during the Chapter gathering and how Redemptorists wish to realise the missionary charism of St. Alphonsus de Liguori in today’s world, characterised by profound re-evaluations and social changes.