Monsignor Geraldo de Paula Souza, C.Ss.R., was born on 1 November 1961 in Assaí, Diocese of Cornélio Procópio, in the State of Paraná. He studied Philosophy at the Pontifical Catholic University of Campinas-SP and Theology at the Instituto de Teologia de São Paulo (ITESP). He then attended courses in Psychology at the UNIMARCO University in São Paulo-SP, in Vocational Orientation at the Sedes Sapientiae Institute in São Paulo-SP and in Social Psychology at the Pontifical Catholic University of Goiás in Goiânia-GO.

After his religious profession made in the Congregation of the Most Holy Redeemer, he was ordained a priest on 29 August 1992. In the Redemptorist Congregation, he carried out his ministry as a Formator in the following communities: Formation House in Mauá-SP (1989-1992); Philosophy in São Paulo-SP (1992-1998) and in Campinas-SP (2006-2008); Theology in São Paulo-SP (1999-2002); Propaedeutic in Aparecida-SP. 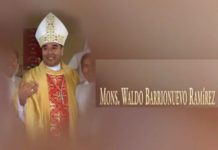 Bolivia bids farewell to Msgr. Waldo Barrionuevo C.Ss.R., Redemptorist Missionary dedicated to the service of the little ones