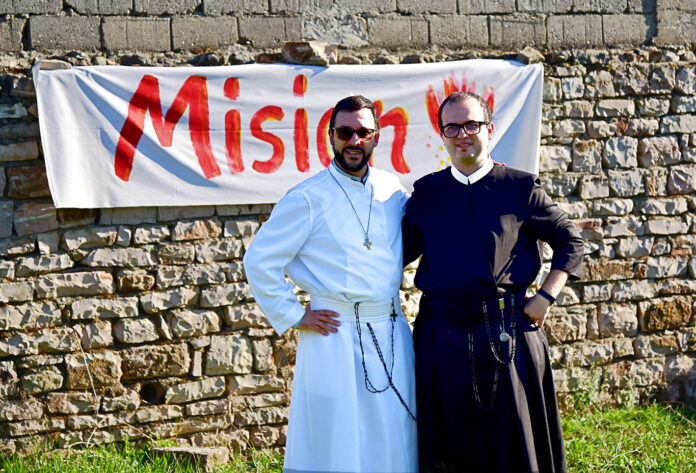 “They will help the people scattered throughout the countryside and rural villages, most deprived and destitute of spiritual relief, with missions”: with these words, our Founder, St Alphonsus, began to write the Rule of our Institute.

Over the years, we often ask ourselves who are the poor to whom we should proclaim the Word, and what are the “campaigns” where we should go to bring the good news of the Gospel.

In Albania, the question is much simpler because one can literally interpret our Founder’s words. The countryside and rural villages are really, as Alphonsus described them 300 years ago: places where Christians are abandoned by all.

The situation in the southern part of Eagle Country is indeed particular. Unlike the north and the area around the capital, Tirana, the presence of Catholics is far lower. In a region with an overwhelming Orthodox majority, thanks to its geographical proximity to Greece, there is an almost ‘invisible’ Church presence that is nevertheless very active and lively. Our confrere Fr Laureano Dell’Otero works with another Rogationist priest in this region and collaborates with various religious sisters scattered throughout the region. The ecclesial context is genuinely unique: there is not officially a diocese with a bishop and all the respective offices, but only an apostolic administrator with several priests and religious who work in a very large territory (more than 16,000 km2) but with very small communities far away from each other and often without a church or without elementary parish spaces.

On the occasion of Missionary Month, the Apostolic Administration of Southern Albania organised a few days of missionary animation. Two Capuchin friars, a nun and a Stigmata novice, two couples of lay missionaries and three Redemptorists from the international mission in Albania took part: Fr Laureano dell’Otero, who already works full-time in this Administration, Fr Zbyszek Kwiecièn and the undersigned Br Gianluigi Colucci.

On the first day, 7 October, we met for lunch and a meeting to get to know the missionaries in the house of the Daughters of Christ the King, some Italian nuns who live in Agirocastro. Then the afternoon was spent in missionary animation in Shendelli, a small village in the Saranda area on the border with Greece. Here we had a moment of catechesis and then fun with games, dances and songs with around 30 children and young people, followed by Holy Mass animated by the young people with songs and prayers. In this village, the social situation was clearly visible: poor people whose difficulty in connecting with other places makes them even more abandoned.

The following day, 8 October, we arrived in Delvina, where we did missionary animation among the young people in the village square. Many were the children, even non-Catholics, who stopped to listen to the missionaries’ words and then played and danced with them. Lunch followed, prepared by the Franciscan Sisters, who have a community in this village.

In the afternoon, we went to Borsh, a small town near Delvina. Here, to reach the small chapel, where some 20 Catholics were waiting for the missionaries to arrive, we had to leave the car on the beach and climb the promontory on foot. As we climbed, however, the view before our eyes was exceptional: we could see the sea with the beach surrounded by the green of the countryside and fields. The impression was indeed that of climbing to S. Maria dei Monti, above Scala, where the poor goatherds had won the heart of our St. Alphonsus so much that he was inspired to found our Congregation!

Here on a terrace used as a chapel, we celebrated the Eucharist surrounded by the blue sea and under a setting sun. After Mass, we had a Christian formation and sharing meeting with the locals, followed by a solemn blessing and sprinkling with holy water. The testimony of the people was truly touching. We were able to touch with our own hands the faith of those people who, during the fierce oppression of the communist regime that destroyed all the churches and killed all the priests, secretly baptised their children with their own hands and educated them in the Christian faith by teaching them catechism and prayers in the evenings around the hearth. In other words, they lived a true ‘domestic Church’ in the absence of a church community for at least 50 years.

On Sunday, 9 October, we experienced a missionary day in Saranda, a beautiful seaside resort. In the chapel of the Marcelline Sisters, we celebrated Holy Mass together with many people whom the reduced capacity of the church was unable to keep. As there were many Polish tourists, Fr Zbyszek delivered the homily in Polish for them. It was very nice to see so many people, especially young families with many children, in the church, which cheered the spirits of all of us. Then we had a formation and sharing meeting with those people, where we encouraged them to live their faith and witness it in the context in which they live.

In conclusion, it is interesting that Catholics in these areas are barely 0.1 % of the population. Still, they are a minority who courageously and determinedly profess their faith and want to grow in it. The wish is that thanks also to our preaching, this tiny ‘mustard seed’ may, in time, reach great heights!