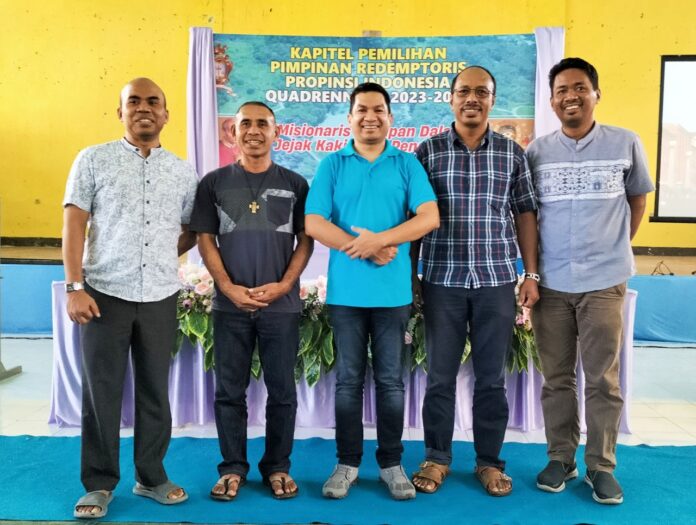 During the Provincial Chapter taking place in Weetebula on Wednesday, October 7, 2022, Fr.  Yakobus Umbu Warata CSsR, usually called Pater Jack, was elected as the Superior of the Redemptorist Province of Indonesia for the term of service from 2023-2026.

He did his Elementary school education at SDK Bondo Lenga from 1986-1992. From 1992-1998 Jack moved to Waingapu and studied at Anda Luri Middle School and High School. During his education, Pater Jack lived and studied at our Juvenate API Redemptorist, Pada Dita.

After completing his education at SMA, Pater Jack applied to become a redemptorist candidate and continued his education at the Senior Preparation Class (KPA) Petrus Kanisius Mertoyudan Middle Seminary (1998-1999).

Then from 2000-2006, he studied at the Wedha Bakti Theological Faculty, Sanata Dharma University, Yogyakarta. This period is interspersed with Pastoral Orientation Years in Lewotala Parish, Larantuka.

After being ordained, Pater Jack was assigned at Pada Dita as socius at the postulate and then as Director of API. At the same time, he worked as secretary of the East Sumba YAPNUSDA Foundation. On the sidelines of this assignment, he studied English in Manila and Melbourne.

Since 2013 Pater Jack has been assigned to Bonn, Germany, and from 2016 to 2022, he was procurator of the Mission. While carrying out his duties as procurator, he studied missiology at “Die Kölner Hochschule für Katholische Theologie” (KHKT) Cologne, and currently, he is completing his thesis.

The Provincial Chapter elected members of the Council. They are: