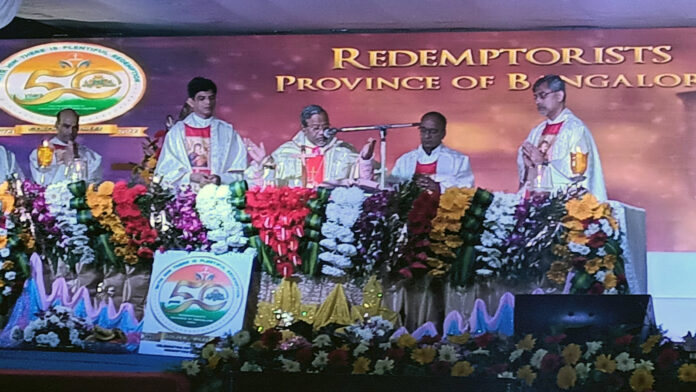 On the 17th of January 2023, as the sun was setting on the grounds of Holy Ghost Church Bangalore, a magnificent stage was set to host the celebration of the Golden Jubilee of the erection of the Province of Bangalore, India. The Redemptorists arrived in India in the year 1940 to start a mission which soon grew into a Vice-Province in the year 1945. And within twenty-seven years, on the 15th of August 1972, the unit in India and Sri Lanka combined was declared as the Province of Bangalore. The Irish Redemptorist from the Province of Dublin worked tirelessly to build this unit and within a period of 32 years of their arrival, a strong unit had taken root and grown into an independent Province with Indian leadership taking up the responsibility of carrying on the mission of the Redemptorist in India and Sri Lanka.

A year-long Celebration of the Golden Jubilee culminated with an event organised in Bangalore on the 17th of January 2023. The programme began with the celebration of the Holy Eucharist presided by his grace, Archbishop of Bangalore, Peter Machado, and concelebrated by Bishop Ignatius Mascarenhas, Bishop of Simla-Chandigarh Diocese, Fr. Ivel Mendanha C.Ss.R., General Consultor of the Redemptorists, Fr. Biju Madathikunnel C.Ss.R., Provincial Superior of the Province of Liguori, India, Fr. Henry Fernandes C.Ss.R.,  Vice-Provincial of the Vice-Province of Majella, India, Fr. Ben Ma C.Ss.R., Coordinator of the conference of Asia-Oceania, Fr. Con Casey C.Ss.R., representing the Province of Dublin, Fr. Edward Joseph C.Ss.R., Provincial Superior of the Province of Bangalore, and more than a hundred Redemptorists from the Province and other units along with clergy from the Diocese and other Religious Orders. Fr. Brendan Kelly C.Ss.R. the Secretary General of the Redemptorist, preached for the occasion and highlighted God’s marvellous work for the mission in India.

After the celebration of the Holy Eucharist, the stage was set for some young talents from St. Alphonsus Academy who added colour, music and cheer to the celebration with their dance and choreography. A video presentation of the history of the Province by the Redemptorist Media Center was screened. It highlighted 50 years of the Redemptorist’s growth, reminding the many blessings that God has showered on this Province to help it reach this milestone. Heart-warming sentiments were shared by the special guests through their messages. While Archbishop Peter Machado thanked the Redemptorists for their service in the Archdiocese, Bishop Ignatius Mascarenhas shared his long-lasting connections with the Redemptorists and thanked them for their service. Fr. Ivel Mendanha C.Ss.R. read out the message of the General Superior, Rogério Gomes C.Ss.R. and then his own message as he acknowledged being a product of the Province of Bangalore is ever grateful for the many blessings he has received through this unit.  Fr. Con Casey C.Ss.R. who had come to India at the age of twenty-two and served in the Province for many years before he returned to Dublin in 1975, shared some of the cherished memories of his time spent in India with his fellow Redemptorists and people.

The evening was made special by the presence of a host of Religious sisters, parishioners, benefactors, lay collaborators, and well-wishers. Finally, Fr. Edward Joseph concluded the evening with his vote of thanks acknowledging everyone who had made this event a memorable one. Above all, he thanked God for these fifty years of Redemptive grace, love and providence and for the wonderful plan He has for the Province of Bangalore for the many years to come.