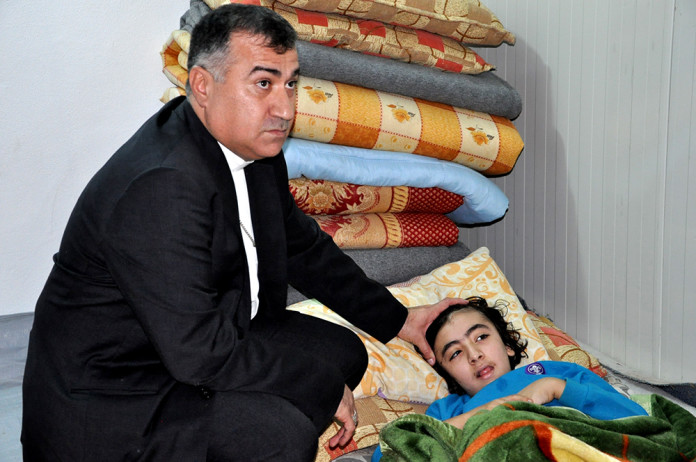 Greetings in Christ the Redeemer!

Christianity in Iraq is going through one of the worst and hardest stages in its long history, a history that dates back to the first century. Throughout all these long centuries, we have experienced many hardships and persecutions during which there were very many martyrs. Recent decades have forced our faithful to leave; many are displaced within the country and many others have migrated abroad. Large numbers fled to places of sanctuary only to be forced to flee a second time – and in many cases even a third time – owing to the spread of violence and other forms of persecution. Each time they fled, they left behind a history and a culture that many sought to suppress and wipe out. My Christian people lost more than 300 villages in the upheavals that followed World War Two. Before that, we were victims of acts of genocide at the hands of the Ottoman Turks during the Massacre of Seifo 1915, and then the Massacre of Semele 1933 at the hands of the Iraqi army. During the Kurdish Uprising in 1961 and the Soriah Uprising in 1969, we were forcibly evicted from numerous villages and towns, and resettled in Baghdad and Mosul.

The aftermath of the last regime change in 2003 saw acts of genocide, both organized and arbitrary, as well as displacement continued unabated starting from Basrah, Baghdad, Mosul, and Kirkuk. The violence was crowned by the Massacre of the Church of Our Lady of Salvation in Baghdad in 2010 during which the Christian worshipers were killed in cold blood. This was yet followed by acts of terrorism and displacement in 2014, the year that witnessed the worst acts of genocide we experienced in our homeland. We are now facing the extinction of Christianity as a religion and as a culture from Mesopotamia.

During the past year, more than 125,000 Christians have been forced to flee from their villages and the city of Mosul only because they chose to remain Christians and refused the conditions ISIS – Islamic State – imposed on them. They had to leave at night, under the cover of darkness. Many of them trod their own path of Golgotha for long hours, having left everything behind, other than the clothes they were standing up in. Arriving on foot, they sought refuge in the relatively secure region of Kurdistan, having no idea as to whether they would ever be able to return to life-long homes.

The Christian displaced families among us have been hearing sad news reports of the acts of pillage and looting of their houses and the destruction of some of them as a result of military operations. They realize well that the military liberation of those areas is not the same as political liberation. We are waiting to know that our villages are safe and secure. We believe the dear Lord will allow us to see that day; and on that day we will return to deserted and ruined houses, empty schools and hospitals. As for our precious churches, it is heart-breaking for us to imagine what they will look like when we return. But we can rebuild.

Today, we have families that are relying completely on the charity of others. Less than a year ago, these same families were in their own houses and were self-supporting, with sufficient or abundant regular incomes. These days, we pray in tents, having left behind ancient churches that lived the story of a flourishing Christianity, blessed with strong willing believers and martyrs.

Too many families have lost confidence in their homeland. This should not surprise anyone. The Christians’ homeland has rejected them and thrown them up. They have chosen to immigrate to the unknown, confident that they will be more secure. The road to immigration has a very long queue. Our friends and families are queued up, waiting for months and years in Turkey, Lebanon, and Jordan for a chance to move again, maybe for the last time, to North America, Europe, or Australia. The difference in outlook between the IDP’s and refugees is that the refugees have made a final decision to get out. The IDP crisis that we are now experiencing in Kurdistan is known as a refugee crisis in the lands of our neighbours. The displaced have either not made a final decision or have decided to try to save more money before they depart.

We have to admit, as a church, that we were not prepared at all for such a crisis. It never occurred to any of us that we would overnight experience what our ancestors did at the hands of the Turks a hundred years ago – the need to flee. We were invested in our homes and villages, busy as church and as a people, with work, pastoral activities, catechism and the promotion of Christian life.