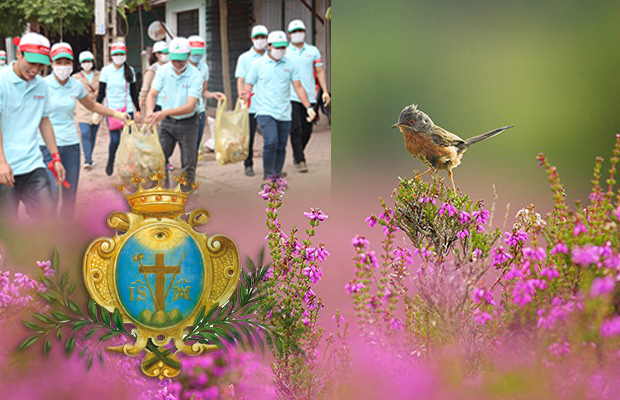 e Chai Group, an association that includes Catholics and non-Catholics, collects scrap to help the poor. The group marks its tenth anniversary of activity under the auspices of the Redemptorists of Mai Thôn (Saigon). Since its inception, it has branched out to other dioceses and parishes around the country. Its volunteers include non-Catholics. Their action reflect Pope Francis’ call to defend nature and promote humankind.

A Vietnamese charity has been following Pope Francis’ Laudato si’ to protect nature and our common house.

For the past ten years, the Ve Chai Group” (Scrap group in Vietnamese) has collected discarded material and scrap metal to raise funds under the auspices of the Redemptorists of Mai Thôn, Ho Chi Minh City.

Their activity has become a model that has spread to other parishes and dioceses, especially in Hue, Hanoi, and especially their home base in Ho Chi Minh (ex Saigon). In fact, the ‘Saigon Ve Chai Group’ was set up on 17 October 2004 and is still one of the most important and active national branches.

Ms Theresa Nguyễn Thuy Duong is the group’s treasurer. She explained that every Sunday “we go out looking for discarded material and scrap metal.” After that, we sell it “to raise funds to help the poor and the needy, especially children.”

It is a good thing that “Young people think about the poor, raising awareness about the environment and the protection of life in all aspects of daily life,” said a proud and happy Fr Uy, from the Redemptorists in Saigon.

Mr Đặng Văn Điệp agrees. A non-Catholic member of the group, he decided to support the initiative promoted by the Vietnamese Church. “I participated for the first time in 2012 when I went to a meeting of the group,” he said, “and even though I could do little, this work is full of meaning.”

The group spread rapidly to many dioceses and parishes such as Hàng Xanh, thanks to the participation of students and young internal migrants, who live far from their families and villages.

Young people joined enthusiastically, collecting trash, scrap metal and discarded material. After sorting it, what was usable was sold and the money went to buy goods and gifts for the poor and children on special occasions like Christmas, Easter, and lunar New Year.

For most activists, the transition from “environmental protection” to fund raising for the poor was a natural progression. In the case of Hai Phong Diocese, the group launched a project to help at least 120 HIV children

In the past decade, “20 tonnes of scrap metal have been collected,” Fr Kien said. This has generated “3 billion dong (US$ 134,000) to fund charitable activities.”

“Work helps young people of the parish to express their love for life,” said Fr Joseph Ta Huy Hoàng, vicar of the parish of Tong Viet Bường (Ho Chi Minh City). “At the same time, it gives them the opportunity to become more aware of environmental issues and heed Pope Francis’ calls to defend nature and mankind.”