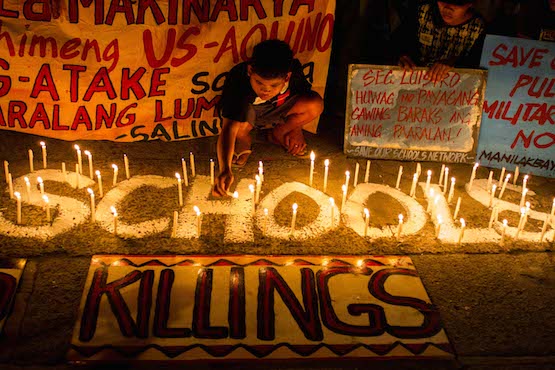 A child from a tribal community in Mindanao lights a candle during a protest in Manila last November. (Photo by Mark Saludes)

Tribal child victim in spate of indigenous people killings in Mindanao
A 15-year-old member of the Manobo tribe has been shot dead in the southern Philippine province of Davao del Norte.

Alibando Tingkas was shot on Jan. 17, becoming the latest victim in a spate of killings of indigenous people in the southern region of Mindanao in recent months.

According to the human rights group Karapatan, 28 children, 12 of them tribal children, have been killed since 2010 when the government started to intensify military operations in areas suspected to be lairs of communist rebels.

Figures detailing the exact number of killings of indigenous peoples over the last few months are sketchy but rights groups claim more than 140 people have been killed since the current government came to power.

Tingkas, a third grade pupil at the Salugpongan Ta ‘Tanu Igkanogon Community Learning Center in the village of Talaingod, was walking with two friends when they encountered members of the Alamara, a paramilitary group in the area.

The Commission on Indigenous Peoples of the bishops’ conference has called for an immediate investigation.

“We are saddened by this unfortunate event and [the commission] extends its condolences to the family of the victim,” said Tony Abuso, coordinator of the church body.

“We should uphold the rights and dignity of every human being especially those of indigenous peoples,” Abuso told ucanews.com.

Abuso’s sentiments were echoed by the Redemptorists who helped fund the building of the Salugpongan Ta ‘Tanu Igkanogon Community Learning Center in 2013 as part of the congregation’s mission to help promote the basic rights of tribal people through education.

“We are dismayed by the recent events especially since the victim was a student of the school that we built,” said Redemptorist Father Carlos Ronquillo.

Ronquillo said the recent killing is aimed at creating “an atmosphere of fear to stop the school from educating the marginalized Manobo community.”

“The killing of Tingkas should be solved in the soonest possible time,” the priest said.

Carlos Conde, Human Rights Watch researcher in the Philippines, said this is not the first time that tribal children have been harmed or killed by paramilitary groups.

“This underscores the need for the Philippine government to investigate thoroughly and independently these incidents and hold the perpetrators accountable,” said Conde.

He said violence against tribal people in Mindanao has gone on long enough and “the government cannot continue to turn a blind eye to the abuses of paramilitary groups.”

Rius Valle, spokesman for the Save Our Schools Network, an organization helping to educate tribal children, expressed fear that the incident will cause renewed evacuation of tribal communities.

Some 700 villagers have not returned to Talaingod after fleeing their homes last year for fear of harassment by paramilitary groups.