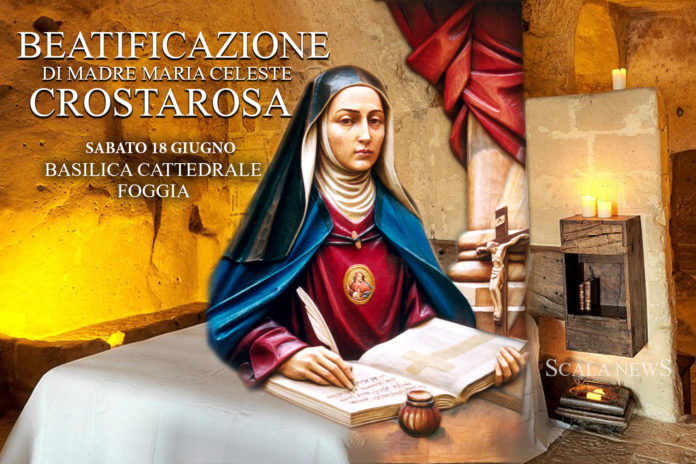 With great joy, the Congregation of the Most Holy Redeemer received the news that the Holy Father, Pope Francis, had approved the Beatification of Mother Maria Celeste Crostarosa. At last, I can communicate to you the program for the Celebrations of this important event. The Beatification will take place on  Saturday, June 18, 2016 in Foggia, Italy.”

With this words Father Michael Brehl, C.Ss.R. gave us the special news.

Today we give you the Program of the Celebrations:

Solemn Beatification of Mother Maria Celeste Crostarosa, presided by His Eminence Cardinal ANGELO AMATO, Delegate of His Holiness Pope Francis and Prefect of the Congregation for the Causes of the Saints.

CHURCH OF THE REDEMPTORISTINE MONASTERY OF THE MOST HOLY SAVIOUR

Solemn prayer vigil with sung Vespers, presided by Most Rev. Michael Brehl, Superior  General of the Congregation of the Most Holy Redeemer.

Solemn concelebration of the Mass of Thanksgiving, presided by His Eminence Cardinal Salvatore De Giorgi, Archbishop-emeritus of Palermo.