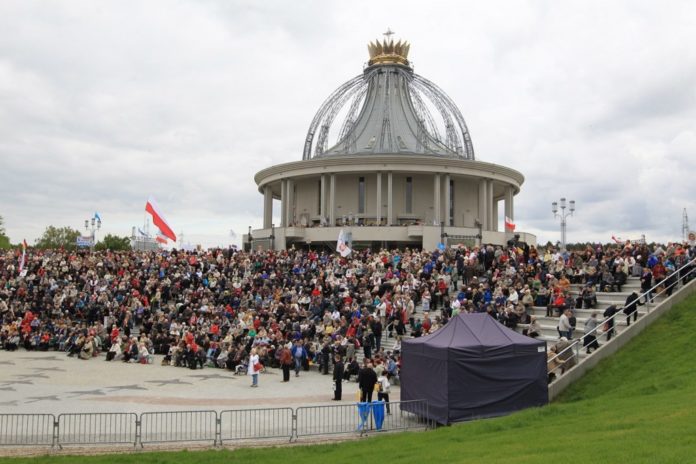 (Torun, may 20, 2016) – A new Redemptorist church was consecrated on the 18th May 2016 in Torun, Poland (Province of Warsaw) and dedicated to the Blessed Virgin Mary, Star of the New Evangelization and St. John Paul II by the Papal Legate Cardinal Zenon Grocholewski. The Apostolic Nuncio Archbishop Celestino Migliore, 55 archbishops and bishops from Poland and abroad, around 400 priests and fifteen thousands pilgrims took part in the celebration. Among the many Redemptorists gathered in Torun was also Fr. Jacek Dembek C.Ss.R. who has been appointed by Father General to represent him at this festivity. “The new church is a continuation of all previous notable works of Radio Maryja and TV Trwam, works they are worthy of admiration and the highest recognition” said Cardinal Grocholewski, in his homily. 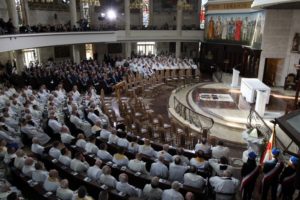 The Eucharist was presided over by Card. Grocholewski, former Prefect of the Congragation of the Catholic Education, who was appointed by Pope Francis in a personal letter to represent him at this feast. The liturgy was preceded by a special solemn procession of the people who significantly marked the history of Poland and also gained esteem abroad (in 2016 we celebrate the 1050th anniversary of the Baptism of Poland). People, who were dressed in historical uniforms, embodied the Polish saints, kings and queens, politicians, artist, scientists, heroes of our struggles for the independence. Fr. Provincial Janusz Sok C.Ss.R and Bishop Andrzej Suski, Ordinary of the Diocese of Torun, greeted all the guests who came to the consecration – the clergy, the Prime Minister of Poland, Beata Szydlo, ministers, members of Parliament, local authorities, members of the Radio Maryja Family, the faithful and all benefactors  – Poles from the whole world –  who helped to build the church. 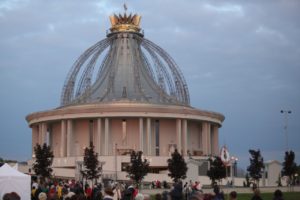 A heart of the new church is a replica of the private chapel of St. John Paul II in the Vatican with the original icon of Our Lady of Czestochowa (Black Madonna) in front of it he used to pray during his papacy. The upper church is decorated with paintings referring to the message of God’s mercy and the history of Poland. The lower church is a chapel dedicated to the thousands of Poles who offered their life helping and rescuing Jews during the Holocaust. Poland was the only country under the German occupation during the Second World War where any help to the Jews was punished by a death penalty. The biggest number of the Righteous Among the Nations, whose names are placed in Yad Vashem in Jerusalem, is from Poland. 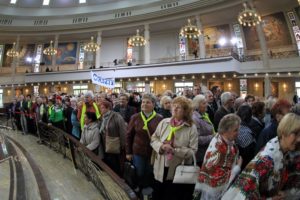 Cardinal Grocholewski stressed in his homily that the works of Radio Maryja were the fruits of love of so many people from Poland and all the world, fruits of their love to God, to the Church and to their country, to the truth and the good. He uttered special words of gratitude to the Redemptorists and Fr. Rydzyk. He also underlined that “Fr. Tadeusz Rydzyk hasn’t lost heart facing difficulties, attacks against him and his works, attacks to stop and destroy them. He resisted the attacks that were directed by those people, who wanted and still want to teach us democracy and the freedom of speech.”

Kard. Grocholewski explained the new name of the church as well: “The New Evangelization is focused on a new zeal and new methods adjusted to the local needs and conditions. This task was undertaken in Poland courageously and absolutely by the Redemptorists through their many initiatives.” 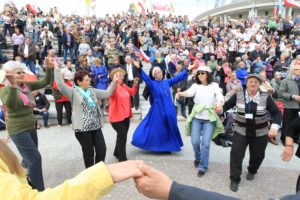 President of Poland Andrzej Duda wrote in his letter sent on this occasion: “I think that the new, beautiful church, built by the Redemptorists and Poles, consecrated on the birthday of Polish Pope, as a sign of gratitude for his papacy will be not only his memorial. In a certain sense it will be a memorial of our Polish culture that is based on respect for human person, on love of freedom, on the evangelical values and patriotism. It will be a memorial of the culture that St. John Paul II gave to the world”.

In the letter of the Embassy of Israel in Poland we can find the words: “St. John Paul II was a great friend of the Jewish people. He was the first pope in the history who visited a synagogue. He worked for closeness of religions and nations. The Embassy of Israel is happy with good contacts with the Catholic Church in Poland and wants to continue them. One of our most important missions in Poland is to confer on the persons the title of the Righteous Among the Nations on. With respect we greet the initiative to honor them in this church.”

The broadcast station “Radio Maryja” was founded in 1991 and the TV channel “Trwam” in 2003 by Fr. Tadeusz Rydzyk C.Ss.R. Twelve redemptorist fathers work at them and at the College of Social and Media Culture that is an independent HE institution (established 2001, currently over 300 students).