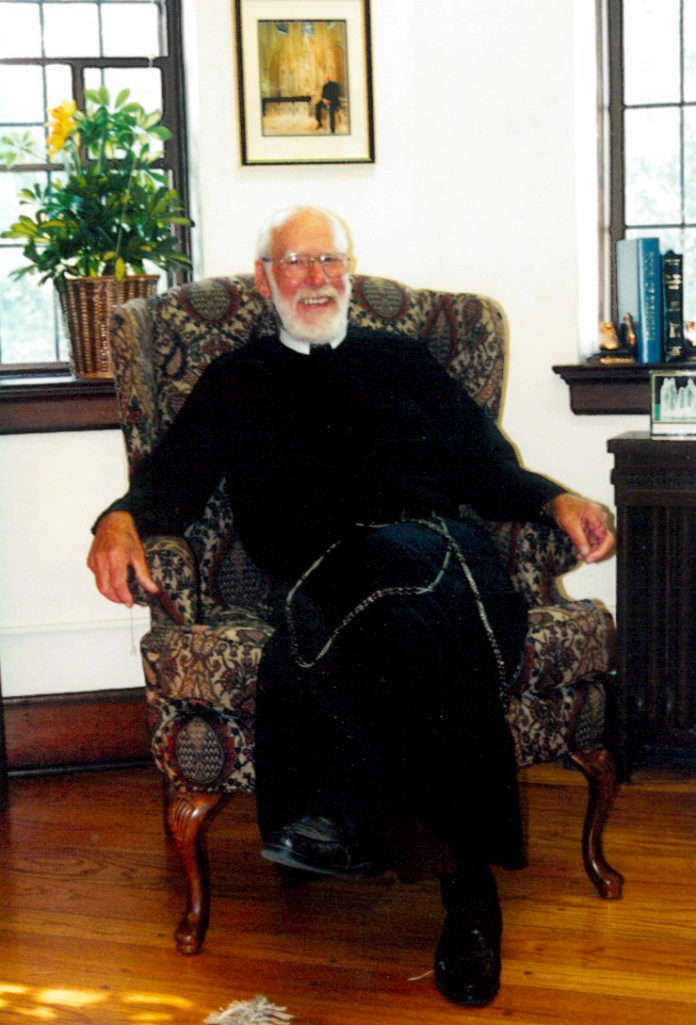 Best known for his unique carpentry ministry, Rev. Patrick Power, who died on May 24 at St. Clement centre in Liguori, Missouri, drew from his Newfoundland outport upbringing during six decades as a Redemptorist.

As a brother and later a priest, Fr. Power remained sensitive to the needs of the poor, knowing the struggles first-hand as one of 10 children growing up on Colinet Island in St. Mary’s Bay. Born on March 20, 1922 and educated at the one-room “Star of the Sea” schoolhouse, he left school at 15 after completing the equivalent of Grade 9 and joined the commercial fishery, noting that “every man on the island was a fisherman-farmer.” The livelihood was mainly cod fishing while each family produced their own vegetables; raised sheep, a pig and a cow; manufactured their own wool – spun yarn, knit their sweaters, socks and mittens; cooked with wood; lit the house with kerosene lamps and heated it with a wood stove in the kitchen. From his father, Pat inherited a love and skill of carpentry, working on boat building and other forms of wood work.

Although an Irish-born priest made a visit to the island every six months, he credited the preservation of the great faith of the Islanders to “their devotion to the rosary and the protection of God through Mary and the saints. They kept vividly alive their Irish faith, culture and customs.” From the age of 12, Pat harboured a priestly vocation.

When leaving home as a restless 19-year-old to find more permanent work, he wrote later “I hated the cod fishery and farming with their uncertainty of success from year to year.” On the mainland of Newfoundland, he found work as a carpenter, painter, iron worker, truck driver and auto mechanic on the U.S. air bases at Gander, Argentia and Harmon Field, sending most of his wages home to help the family’s finances.

Leaving Newfoundland for Boston in 1947 for better wages, he worked as a mechanic and later on a lake freighter to earn enough money to pay for seminary as he possessed no doubt about a priestly vocation. Upon quitting a job in a machine shop in Detroit, he was advised by a priest in the nearby church to seek a religious community with Brothers as he was too old as a 25-year-old to enter a seminary. After visiting a number of congregations in Detroit, Pat rang the doorbell of Holy Redeemer Church rectory on Junction Avenue and was greeted by a Brother. That first meeting and subsequent interviews confirmed “that the Redemptorists was where God was calling me.”

After postulancy at Glenview, Illinois and novitiate at De Soto, Missouri, he took first vows on August 2, 1950 under the religious name of Brother Kevin. As a member of the St. Louis Province, he was assigned to Lebanon, Indiana as sacristan, school bus driver and maintenance man and later to Our Lady of Perpetual Help, a Spanish parish in San Antonio, Texas. In addition to driving a school bus and Sunday bus for Mass, he worked on renovating one school and building another one. Posted to the mission (1953-1960) in Thailand as the first Redemptorist Brother, as the first project, he built a boat which was launched and fitted for the mission route. A year later on August 2, 1954, Br. Kevin made final profession in a small church in Xang Ming, a village in northeast Thailand. For the next six years, he was busy trying to fill the requests to build churches, schools and houses for the priests. From a visiting priest from the U.S, he learned of the opening of the priesthood to older men. After obtaining permission, he left Thailand in 1960 and was engrossed in preparatory courses and later seminary studies at Oconomowoc, Wisconsin.

Realizing his ambition as a priest at the age of 44, Fr. Power was ordained in St. Alphonsus Rock church in St. Louis, Missouri on June 24, 1966. For his First Mass, Fr. Power returned to Colinet Island to celebrate the liturgy in one of the two small chapels on the island. Fr. James Mason, who attended the Mass, remembered a joyous occasion, not only for the ordination but for the temporary return of the Islanders, whom the Newfoundland government had resettled on the mainland in the early 1960s. 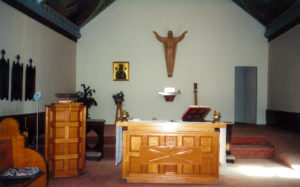 Power served at St. Peter’s. In the reappointment at St. Peter’s, he designed and built pews, a pulpit and an altar (pictured left) in the Redemptorist chapel. To support a Redemptorist leper colony at Khon Kaen, Thailand, his wooden artistic pieces of tables, model ships, including the Blue Nose II, were sold and raised thousands of dollars to purchase medicine and to construct a clinic. “You would never believe how happy the people are here, when I give them the opportunity to support those lepers and the cause of the underprivileged poor in Thailand,” Fr. Power noted in a newspaper article.

For health reasons, he moved to Sacred Heart Centre, Rolling Meadows (1990-1993) and later to assist at the retreat centre at Glenview, Illinois. From 1996, he lived at Our Lady of Perpetual Help monastery in Kansas City, Missouri, where he continued to support the missions by making and selling fine inlaid wood pieces, including custom-made caskets. In 2002, Fr. Power transferred to the Denver Province.