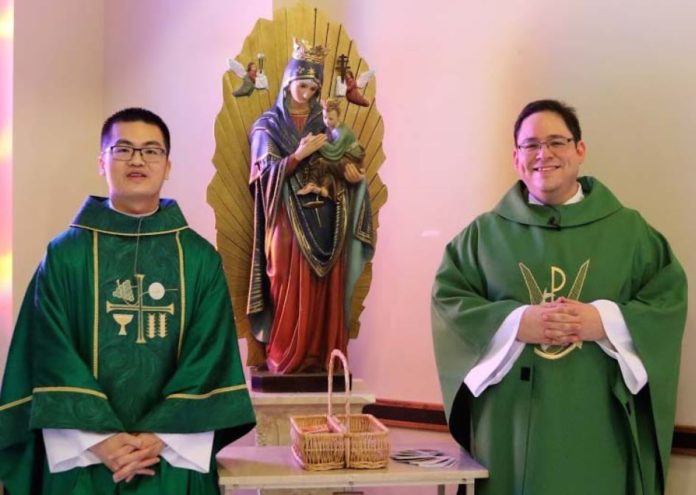 Deacons Kevin Zubel and Quy Duong were ordained to the priesthood at Holy Ghost Church in Houston, where they professed their first vows as Redemptorists back in 2012. “It was particularly meaningful to celebrate our ordination at the same place we professed first vows,” said newly ordained Fr. Kevin. “These two significant moments in our lives as Redemptorists are forever connected.”

Dozens of confreres, family members and friends – many of whom traveled great distances for the ceremony on January 28 – were surprised to see Cardinal Daniel DiNardo, Archbishop of Galveston-Houston, presiding as ordaining prelate instead of Bishop George Sheltz, who was forced to cancel because he had been hospitalized.

“Cardinal DiNardo and his staff were incredibly gracious in the days leading up to the ordination. I’ll always be grateful to the Archdiocesan Office of Worship for going above and beyond in planning an unforgettable liturgy for us Redemptorists and the people of Holy Ghost,” Fr. Kevin said.

Provincial Superior Stephen Rehrauer, Provincial Vicar John Fahey-Guerra, members of the Extraordinary Provincial Council, and more than 35 members of the Denver Province and the Extra Patrium Vice Province concelebrated the liturgy. Among the memorable highlights of the ceremony, Fr. Kevin was most touched by the blessings he received from his confreres, including at least one mentor from every stage of formation.

“Factoring in the presence of so many Redemptorists, excellent collaboration with the Archdiocese, and the direct link to our first profession, the ordination celebration was a fitting symbol of our call to living our charism in a spirit of apostolic charity alongside the local church,” Fr. Kevin said.

“The diversity of languages and cultures represented at Holy Ghost for our ordination reflects the diversity I dream of seeing in the communities I will serve as a priest,” Fr. Quy said. Fr. Kevin said he was most honored to be ordained with his longtime classmate, brother and buddy. “We’ve experienced so many adventures, and have encouraged each other in our vocations. I can be overly cautious and pragmatic to a fault. Quy has taught me so much about living in the moment and enjoying the ‘happy accidents’ of life in ministry,” Fr. Kevin said. Fr. Quy was quick to add that he has learned just as much from Fr. Kevin.

Fr. Graham Hill of the Edmonton-Toronto Province, a novitiate classmate, joined them at their first Mass of Thanksgiving. “It was a privilege to offer the Eucharistic Prayer standing side-by-side with both of them,” Fr. Kevin said. “We are like the three musketeers!” Fr. Quy explained. “We have overcome many battles, and there will be many more to come., but we will face them together. Although, Kevin and I need an app to keep up with Fr. Graham because he’s so far away in Canada, somewhere near the North Pole.” Members of the choir from Fr. Kevin’s home parish, St. Austin Catholic Church in Austin, and the Vietnamese Dominican Sisters, who have played a key role in Fr. Quy’s life over the years, joined the Holy Ghost Catholic Church Choir and the Archdiocese of Galveston-Houston Choir directed by Dr. Richard Lopez..

“I was overwhelmed – but not the least bit surprised – by the incredible hospitality and efforts of Fr. Bill Bueche and the Holy Ghost Catholic Community, who crafted not only an incredible liturgy but a first-class reception as well,” Fr. Kevin said. Fr. Kevin is excited about returning to New Orleans for Lent and Easter (not to mention the little party they have in the days before Ash Wednesday!) He looks forward to joining our missionaries in the Mississippi Delta in his first assignment – even if his move coincides with the heat of summer. He couldn’t be more excited to begin ministry, blessed “by the grace of God and the fraternal support and guidance I have enjoyed throughout these past eight years!”

Fr. Quy is determined to make the most of his remaining months in Kansas City, and is thrilled that he will serve the culturally diverse faith community at Holy Ghost in his first assignment. “It may take some time to get used to the heat and humidity again, but I don’t mind a little break from ear muffs and thermals,” he said.