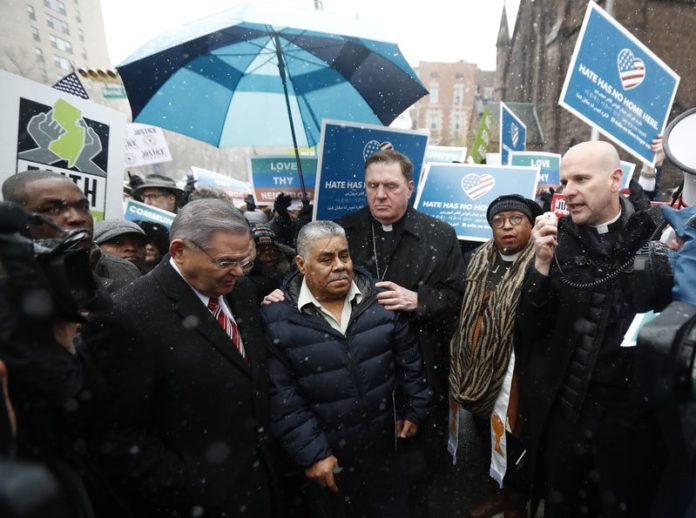 NEWARK, N.J. (AP) — The leader of the state’s largest Roman Catholic archdiocese bowed his head and prayed with a man who entered the U.S. illegally decades ago before the man walked into a federal building to face possible deportation, a high-profile example of how religious leaders are responding to recent immigration enforcement actions under Republican President Donald Trump.

Cardinal Joseph Tobin, the head of the Newark archdiocese, led a rally Friday to support Catalino Guerrero, portraying him as embodying the human cost of a broken immigration policy. Guerrero, whose immigration issues began before Trump took office this year, was given a 60-day extension to seek a stay of deportation.

Guerrero, who’s from Union City and has four children and four grandchildren, “puts a face” to what is often treated as “statistics or demons,” Tobin said before the hearing.

“You can see what Catalino looks like, and you’ve heard how he has lived,” Tobin said. “We’re now going to ask the officials determining his fate to not only see his face but ours as well.”

The U.S. Conference of Catholic Bishops has issued a steady stream of criticisms of Trump’s restrictions on refugees and immigrants. Other faith groups, including a network of 37 Protestant and Orthodox denominations that work with the aid group Church World Service, are mobilizing their congregations to fight Trump’s policies.

Hundreds of houses of worship around the country have joined the sanctuary movement, which provides support or housing to people facing deportation.

Guerrero, who’s 59, came to the U.S. illegally from Mexico in 1991 and has worked consistently and paid taxes, owns his house and has no criminal record, Democratic U.S. Sen. Bob Menendez said. He applied for a work permit several years ago but filled out a form incorrectly and mistakenly applied for asylum, Menendez said.

A U.S. Immigration and Customs Enforcement spokesman said Guerrero was ordered removed from the U.S. in 2009 and must periodically report to ICE as a condition of his release.

Attorney Cesar Estela, representing Guerrero, said Guerrero has diabetes and suffered a stroke several years ago. Estela said he will use the extension to file paperwork to seek to put Guerrero on a path to get a green card.

Guerrero has had his deportation delayed primarily due to his medical condition, Estela said. At a meeting with ICE officials last month, though, Guerrero was told to plan to surrender his passport Friday. Estela said he sought a year’s stay of removal for Guerrero on Friday but was denied. The next hearing is May 22.

After leaving Friday’s hearing, Guerrero enveloped one of his granddaughters in a hug.

“He is a very good man. He has no reason to go back,” said another granddaughter, 10-year-old Lizbeth Perez, fighting back tears. “He is not a criminal or anything. I feel really sad that they’re doing this to him because he didn’t do anything.”

Menendez said he hopes Guerrero’s case and others like it around the country will spur renewed efforts at immigration reform. Menendez and Democratic U.S. Sen. Cory Booker wrote to the acting head of ICE to ask him to consider Guerrero’s case and use the agency’s resources on people who pose a safety risk.

“I hope President Trump is watching because Catalino Guerrero is not a bad hombre,” Menendez said, referring to a characterization made by Trump of people who would be targeted for deportation.

Trump has said his immigration and refugee policies are necessary to protect the nation.

Tobin has been critical of Trump’s policies and squared off against Vice President Mike Pence when, as governor of Indiana, Pence wanted to prevent Syrian refugees from settling in the state. Tobin was the archbishop of Indianapolis at the time.

Last month, Tobin called Trump’s executive order temporarily banning immigrants from seven Muslim-majority countries “misbegotten” and said it was “playing on irrational fears of people.” He said lawmakers should focus on fixing immigration laws rather than on large-scale deportation.

Through Catholic Charities and other programs, American bishops consistently resettle the largest number of refugees annually in the U.S. and provide support nationwide for immigrants. Among others leading protests are U.S. Muslim and Jewish groups, including the Union for Reform Judaism, the largest American synagogue movement.